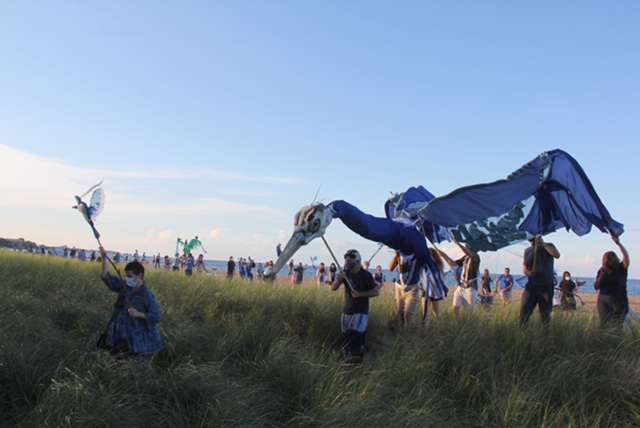 People work together to move a large blue heron. Members of Art of Spontaneous Spectacle and a public audience danced with bird masks during one performance.

A loose collection of actors and musicians, unable to perform in a traditional theater setting, have banded together to form Art of Spontaneous Spectacle, an ever-changing troupe that has performed a handful of times in Loyola Park.

Communication Prof. Jessica Thebus, one of the events’ organizers, said the group has put on three performances, with two more planned in August and one in September. And if the pandemic would allow it, Thebus said she would love to bring the group to Northwestern’s campus.

Some of the performers said both the most exciting part and the most anxiety-provoking part is the unpredictability of working in the street — the fact anything could happen.

“I think it intends to be a joyful event during a time that is scary and full of anxiety. That is how it has felt,” actress Jenny Avery said. “It’s like a burst of theatricality where it is not expected and that is very joyful to participate in.”

The masks seemed “ancestral” to Henderson, who is black, and wrote a personal narrative to perform with them. Juneteenth staples like fried fish, strawberry pie and strawberry soda were provided, which Henderson said symbolized spiritual nourishment. And after the performance, everyone sang “This Little Light of Mine,” which Henderson found moving.

“I wanted to honor Juneteenth and that legacy and at the same time draw attention to American indifference to violence against the black body,” Henderson said. “If you can’t empathize with violence against black bodies, if you can’t understand why that is problematic and people are marching against it, then you may need spiritual nourishment.”

“For me performing in spaces that are not usually used for performance is the most exciting to me,” Smith said. “To watch the way the children ran with the birds… It’s beyond what we control and decide to do. We set out these tools to be with. Anything can happen. The idea of the director is gone.”

Communication Prof. Shana Cooper was one of the original artists who formed the troupe with Thebus. Cooper said she feels empowered and liberated when she performs with the group, and grateful to be able to give the gift of theatre to the public.

One of the unique features of the group is the thin line between performer and audience. Cooper said public performance is something people are especially craving due to the pandemic.

“Art of Spontaneous Spectacle is something anyone can create. I hope people reading this article inspires anyone who has a passion for artmaking can do it in a way outside,” Cooper said. “It offers a real gift feeling and connection to a community that is craving that after quarantine.”

— Stuco activities to be held remotely