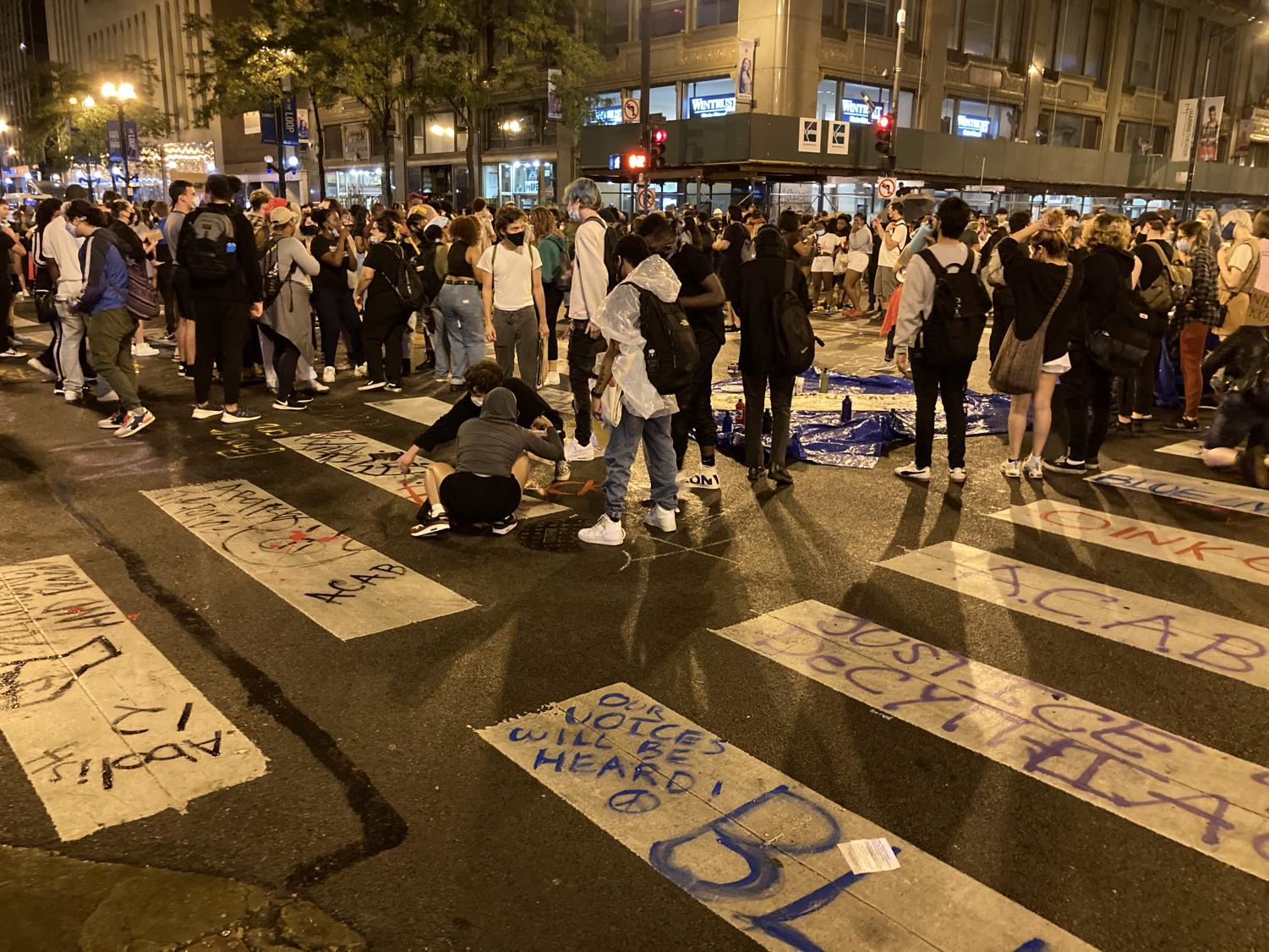 The Loop. Protestors painting the street at the intersection of State Street and Jackson Boulevard at 10 p.m. Saturday. (Binah Schatsky/The Daily Northwestern)

The Loop. Protestors painting the street at the intersection of State Street and Jackson Boulevard at 10 p.m. Saturday.

This piece was co-written by staff at the Chicago Maroon and The Daily Northwestern, as the first in a reporting partnership focusing on activism around campus policing.

Hundreds of mask-wearing college students danced in the streets of the Loop on Saturday, with music and chants to “abolish the police” ricocheting down Michigan Avenue.

Welcome to Solidarity Street, the protest-meets-block party organized by students from six Chicago-area universities and activists against the police. Early in the evening of August 1, Tynetta Muhammad, Black Youth Project 100 member and University of Illinois at Chicago student, addressed the crowd from Millenium Park.

“We stand on Solidarity Street,” she said, “the crossroads of justice and unity, knowing that our unity is more powerful than any of the things formed by white supremacy.”

The action was the latest in a wave of protests against police in Chicago and nationwide in response to the police killings of George Floyd and Breonna Taylor. Many Chicago-area college students responded by calling on their universities to divest from the Chicago Police Department or private police forces. Others, though, have been organizing against police for years.

Take a look at the demands, represented schools, and sponsors/supporters.

University of Chicago junior and longtime organizer Alicia Hurtado called on protestors to pay attention to how universities use their private police forces.

“We know that, in this moment, it’s on students, everyone in this crowd, to not remain complacent,” Hurtado said. “We know that (the University of Chicago Police Department) is used to create this racist project of gentrification by UChicago on the community,”

Hurtado organizes with #CareNotCops, an activist coalition at UChicago that sponsored the event, along with several Chicago-area activist groups. But a key piece of the night was also the university representation.

According to Muhammad, the elite structures of admissions and neighborhood gentrification associated with university activity in many places often come at the cost of black, brown and Indigenous communities — and university police departments are no exception.

Two phrases stood paramount in the streets Saturday night. The first was “defunding the police,” which many call a step on the way to the group’s second demand — “abolishing the police.”

Often, one response to activists’ calls for the abolishment of police is to wonder what would happen in communities without a police force. But one NU student has a vision for what a police-free campus would look like.

The student, who chose to remain anonymous, said the removal of law enforcement is a chance to focus on support systems for sexual assault survivors within their communities.

“It also means helping students with mental health instead of calling the cops on students because they haven’t shown up to class for two weeks,” she added. “Abolition looks like actual solutions to all these problems we have.”

UChicago senior Amber Keahey said she sees defunding the police as an opportunity to redirect money to other community resources. She said she’d like to see money currently earmarked for UCPD go toward establishing cultural centers for UChicago students.

“Defunding UCPD opens up a huge range of things that are ultimately more beneficial for their students,” Keahey said.

The key: Students say abolition is the only way forward

For the same anonymous NU student, opposition to policing practices has been a long-term political viewpoint — one she’s held since 2014.

After the killing of Michael Brown by a police officer in 2014, which sparked protests in Ferguson, Mo., she said she supported the ideas behind abolition, though she didn’t call herself an abolitionist until this year.

She added that true abolition involves the reimagination of multiple existing systems within the framework of capitalism, such as private security forces, Child Protective Services and educational institutions. All of these, she said, can lead to people being policed even in the absence of literal police force.

And a key piece of all of this? Reform is no longer an option and abolition is the only way forward, she said.

“If you want to look at a reformed police department, you can look at the police department that killed George Floyd,” she said. “We’ve been reforming for 100 plus years. When are we going to stop and try something new?”

Glo Choi organizes for HANA Center, which works to support Korean American and multiethnic immigrant communities. HANA Center brought conversations of abolishing U.S. Immigration and Customs Enforcement into Solidarity Street, solidifying the notion of policing as a system larger than one department.

Above all, Choi said policing as it stands has failed, serving only to protect property, not communities. Still, for Choi, actions like Solidarity Street represent hope.

“It’s kind of hard to capture how beautiful yesterday was,” he said. “Everyone recognized that liberation is a shared struggle and people had a clear vision of how to make it possible… And I just love to see people dancing to abolish the police.”

Calls against CPD were a central part of Saturday’s demands. And though its reach differs by school, CPD affects all the schools that were in attendance — the uniting factor for activists.

Other schools, like DePaul, have no private police force and rely exclusively on CPD.

At NU, those seeking transparency face similar roadblocks. NU administrators have previously struggled to name specifics on NU’s police budget, and have not committed to divestment from policing.

Because both NU and UChicago are private institutions, transparency is at the discretion of the University — an issue that partially prompted the protests. As a result, many activists look for a collaborative path forward involving university administrators as they work to defund or abolish the police.

– Administrators admit to transparency and cultural change, but not to divesting from Northwestern police