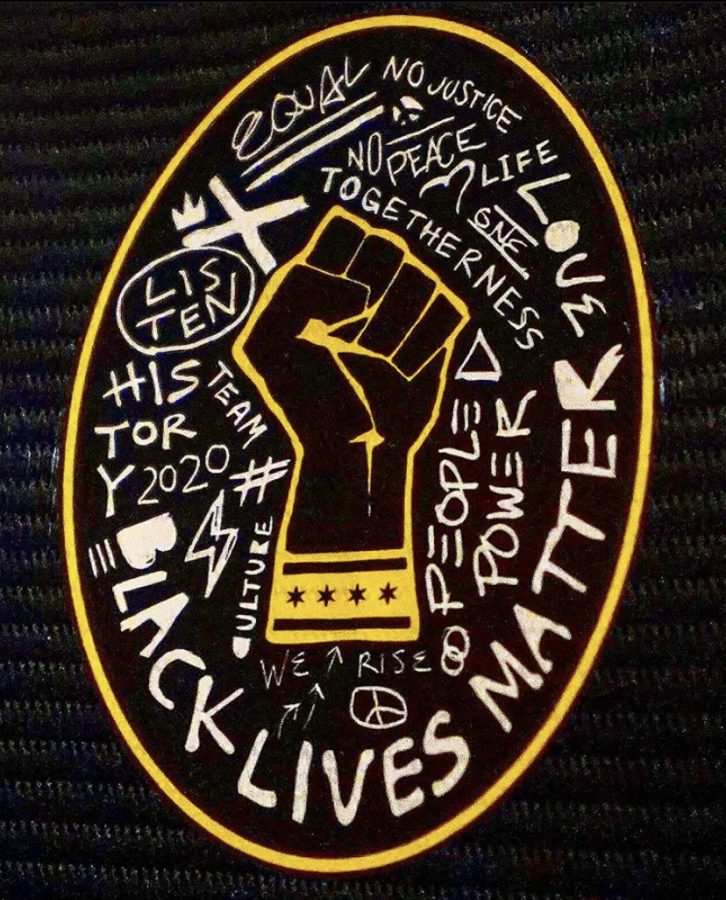 White landed this opportunity after Scott Hammer, the senior marketing director for the Chicago Fire FC, saw White’s art and asked him if he would create something for Chicago Fire’s uniforms to support the Black Lives Matter movement.

After reflecting on what this movement meant to him and his friends, White created the Fire x Black Lives Matter patch over one weekend. He said he wanted the message on his patch to be clear: Black lives matter.

White shared several drafts with Hammer and his team. The final design was approved quickly and went into production before the tournament.

“Working on a very short timeline, Dwight delivered a remarkably comprehensive piece, drawing on a range of symbols and iconography that really speak to the complexity of the movement,” Kyle Sheldon, the senior vice president of Chicago Fire FC, wrote in an email.

Fire x Black Lives Matter is an oval shaped patch that contains white lettering on a black background. The words “listen,” “togetherness,” and “no peace” are set alongside other meaningful words on the periphery of the patch. A black fist, outlined in gold, stands prominent in the middle.

“Dwight emplemifies so much of what the Fire stands for,” Sheldon said in an email.

And yet while White was at Northwestern, he did not envision art in his future. He dreamt of playing football, and maybe even making it to the NFL.

That dream was cut short in 2014 after White woke up one morning with a sharp pain in his abdomen.

White went to the hospital and discovered that he only had one kidney. A week and a half later, during practice, White jumped for a ball and his back landed on a teammate’s knee. He urinated blood after practice and was taken to the hospital, again.

This time doctors discovered a bruise on his kidney, and informed White that his injury could be life-threatening if he kept playing football.

White had a decision to make: Either continue playing and put his life at risk, or give up on his dream and focus on a future without playing football. After giving it some thought, he chose to stop playing.

“I felt like I lost a part of myself,” White said. “But I started thinking about things that would bring me joy.”

White said he could always look at something and draw it, but that was never something he took seriously. He rekindled this talent by creating graphics that his teammates used on social media and posters. This kept him in touch with his teammates and was a welcomed distraction.

In 2018, shortly after he graduated with a master’s degree in Integrated Marketing Communications from NU, White launched his art business. And while he said he enjoys his art business, White added he wants to live in another country, immerse himself in new cultures and become an international artist.

“I want to touch the world and inspire youth all over,” White said. “I want to do things that I wasn’t ever told I was able to do growing up.”

— Gameday: Oft-criticized Dwight White keeps his head up as playing time goes down