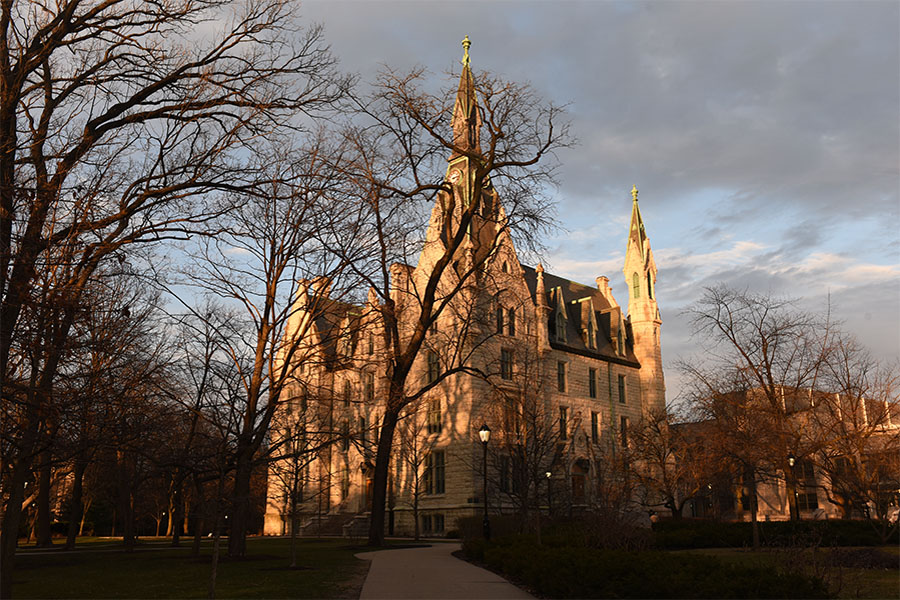 University Hall. Northwestern recently announced it would reinstate faculty and staff retirement contributions after suspending them in May.

As members within and outside of Northwestern Greek life continue to debate its future on campus, some members in Panhellenic Association sororities have made plans to deactivate from their chapters, reporting instances of marginalization as a contributing factor in their decision.

Over the weekend, PHA leadership met with chapter presidents to discuss issues raised amid a national reckoning on race and debates about possible abolition. The meeting followed internal discussions on abolition in select chapters and a number of member deactivations.

Weinberg sophomore Kate Tadesse deactivated from Pi Beta Phi last week. Although Tadesse cited the financial burden of Greek life as the primary faction in her decision to leave Pi Phi, she wrote in a statement to The Daily that she experienced subtle racism during her time in Greek life and did not receive the support promised by Greek life. Tadesse joined Pi Phi Winter Quarter and only spent two and a half months on campus with the sorority.

While other girls quickly became friends, Tadesse wrote that she noticed her friends within the sorority were the few other black, Indigenous and people of color in her pledge class.

“Even though my sorority had more diversity than others, it did not provide me with a very welcoming space,” Tadesse wrote. “The older girls who were so friendly during rush week became cold and cliquey after joining.”

Although Tadesse said she recognized that she might have found more friends if she remained in the sorority longer, she didn’t feel the need to fight to earn friendship.

Tadesse is not alone. According to this year’s Associated Student Government analytics survey, many students report feeling marginalization on campus, including within Greek life.

The survey, which received 1,359 responses, asked respondents to weigh in on the statement, “I have never felt marginalized at Northwestern due to race, gender, sexual orientation, ability status, ethnicity, nationality, socioeconomic status or religion.”

Of those surveyed, 39.4 percent responded “disagree” or “strongly disagree” to the statement, with 13.8 percent of people with those sentiments citing Greek life as the setting in which they experienced marginalization.

For some, marginalization based on race started during the recruitment process.

At the beginning of recruitment, prospective members visit all 12 sorority houses. Over the course of a week, potential new members narrow down their list of chapters to two, making return visits and talking with current members.

Weinberg sophomore Sara Muttar, a member of a PHA sorority, said she experienced racial marginalization during the recruitment process.

“I’m from the Middle East — I’m not white-passing by any means,” Muttar explained. “Even when we’re sitting down in the house, you look around and there’s probably like three other brown girls and we’re all paired with brown people.”

Muttar said she doesn’t know if she was excluded from any sororities due to her race, but she said that she did feel tokenized from someone on the executive board of a sorority during recruitment.

When asked if PHA has any official policy on race-matching, Zana Rashid, the vice president of public relations for PHA, referred The Daily to PHA’s bylaws and the National Panhellenic Conference’s Manual of Information. Neither document explicitly mentions a race-matching policy, though they do outline some policies for diversity and inclusion, including prohibiting discrimination in membership selection on any basis prohibited by law.

According to PHA’s 2020 Formal Recruitment guidebook, prospective members are encouraged to report any behavior that makes them uncomfortable.

Ultimately, Muttar opted to join a PHA sorority. However, after becoming a member, Muttar said she encountered further marginalization, this time based on her socioeconomic status.

While her sorority did disclose the cost of dues prior to Bid Night, Muttar said she struggled to pay the dues for Winter Quarter, which she said totaled $900 even after applying for scholarships. Throughout the quarter, Muttar, a first-generation and low-income student, said she encountered smaller fees and costs, which she wasn’t made aware of before joining her sorority.

“The system was not made for me,” Muttar said. “I had a really hard time being accepted because of my socioeconomic level in Greek life, which is so wealthy and affluent.”

Although Muttar said her chapter was understanding of her financial situation, she said her sorority’s national organization was not. When Muttar met with national representatives, she said she shared how difficult it was to pay dues and how ostracized she felt from Greek life.

“After we pressed [one of the national representatives] more about it, she basically just called me below the poverty line,” Muttar said. “They’re running a company — if I’m poor, too bad.”

Muttar has not yet deactivated from her sorority because she said she wants her vote to count if her sorority decides to vote on the issue of abolition.

Similar to Muttar, Weinberg sophomore Rachel Chung, a member of the University’s Delta Gamma chapter, said she has considered deactivating from her sorority but has chosen to put off the decision.

Chung said she already signed a housing contract to live in Greek housing in the fall, and due to the coronavirus pandemic, she does not want to pursue off-campus housing.

However, Chung says she plans to deactivate in the future because she doesn’t want to perpetuate the existing system in her sorority. Although Chung said details regarding winter recruitment are still to be determined, she said she knows she will be interacting with people that look like her and people of color.