Benavides: Now is the time to get rid of toxic productivity culture 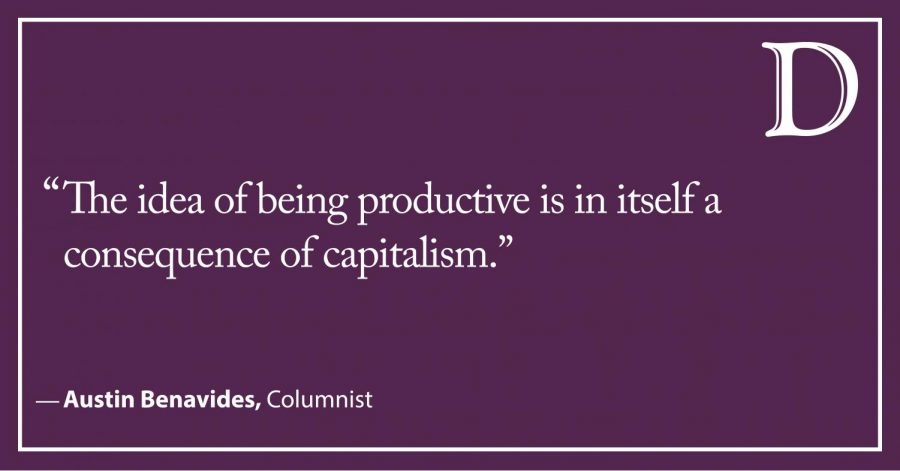 I remember the first weeks coming home after campus transitioned entirely online in the spring.

California was one of the first states to start closing things down and put in mask orders, so right away my environment changed from freely moving with friends, to only being at home with my many family members.

Soon after, classes started. I thought to myself that this will be the quarter where I put the effort into classes now.

What followed wasn’t at all what I had expected.

It turns out, being stuck living with your family was more of a burden than I had already prepared myself for. Living with parents, grandparents, a sibling, uncles, and great grandparents all in a small space gave me no room to breathe at all.

Only a few weeks into the quarter, my mother had gotten close to deathly sick. Not because of the coronavirus, but the uncertainty before we knew that left me mentally in shambles.

It wasn’t soon after that I began caring less and less about the classes I had registered for. Not because of the courses themselves — I thought most of my professors did a great job accommodating for the circumstances — but because I no longer had space to deal with the complex emotions of the pandemic and family problems.

The steady four-and-a-half classes that I wanted to take in the spring soon dropped to three. I can’t say I truly remember most of my courses after the month of May started, but certainly, only a quarter of me functioned in an academic capacity.

I questioned why I was struggling so much. I doubted if my struggles were even real because I saw my fellow classmates persevere past their struggles and get successful internships and opportunities. In my mind, they were being productive, while I was feeling the farthest from it.

All of this weighed heavily on me. When friends reached out, I felt too drained to respond. Countless emails and texts left unopened in my inbox served as a constant reminder of all the negative aspects of quarantine. They piled up to a point where starting to engage and move on felt insurmountable.

Sitting here, about a month after the end of Spring Quarter, I have come to terms with many of the emotions and experiences I felt.

The lesson I learned, above all others, is that it’s okay to not be “productive” during this pandemic. Because, well, it’s a pandemic.

The hyperfocus on productivity during a time like this is understandable. Many of us are sitting in our rooms, yearning for tasks to keep our minds running. But ultimately, by preaching “productivity” we’re doing more harm than good.

The idea of being productive is in itself a consequence of capitalism. Where our worth is only defined by the labor we do for other people. By telling people to get an online internship or to take more classes during these unprecedented times, what you’re actually saying is that you will only recognize their struggles if they participate within institutions that have caused many of the problems that currently afflict them.

This is still difficult for me to do because these institutions constantly find ways to promote and highlight stories of people going above and beyond in quarantine. Scarce are the praises for people who sit at home and take this time to do what they feel they need to do.

Doing things solely because you want to and without any thought for its financial consequences is liberating. Actions like taking a day to calm yourself, going for a walk or using a journal to express yourself aren’t valued as productive by many in the general public, but they should be.

It shouldn’t take a pandemic for people to value actions that don’t serve financial ends, but here we are, and now is the time to dissolve this false notion and adopt a more communal, less pressured approach at surviving while this country is falling apart.

Austin Benavides is a Medill junior. He can be contacted at [email protected] If you would like to respond publicly to this op-ed, send a Letter to the Editor to [email protected] The views expressed in this piece do not necessarily reflect the views of all staff members of The Daily Northwestern.

— Benavides: Voter suppression will run rampant if we don’t stop it

— Benavides: Recent coverage shows the media has failed to fix the same problems of its past