With slight majority, Evanston City Council could move toward defunding 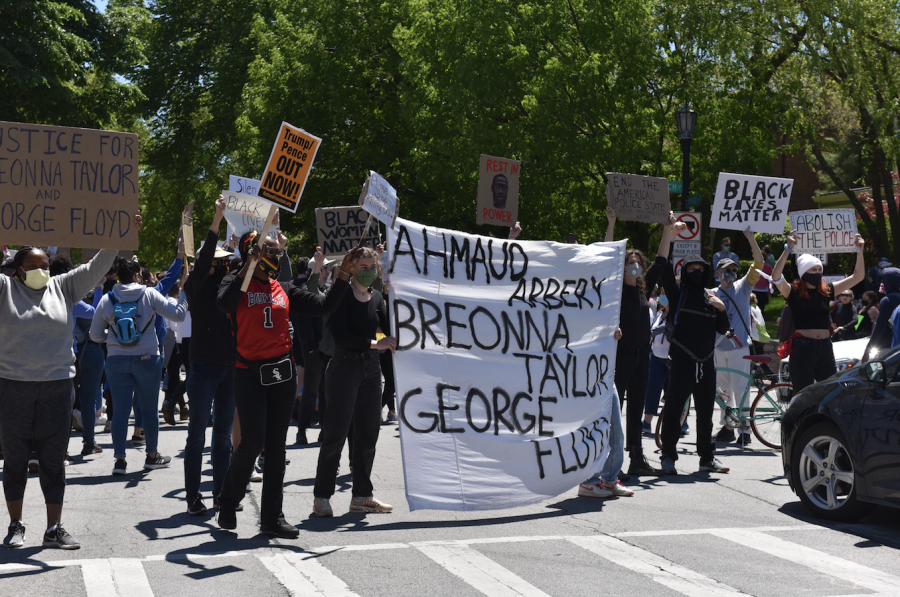 Protestors call for nationwide police reform in Evanston on May 31. City Council will discuss the possibility of defunding the Evanston Police Department at Monday’s meeting.

With a slim majority in support, City Council could take the first steps toward translating the movement to defund the Evanston Police Department into action at tomorrow’s meeting.

Five of the city’s nine aldermen – Peter Braithwaite (2nd), Robin Rue Simmons (5th), Donald Wilson (4th), Cicely Fleming (9th) and, as of Thursday, Eleanor Revelle (7th) – have made statements in support of defunding. On Monday, the council will engage in the first open dialogue about EPD’s future. Ald. Ann Rainey (8th) and Mayor Steve Hagerty have said they oppose defunding.

Evanston entered the national movement against police brutality with a May 31 protest that drew more than 1,000 participants. Since then, a local youth-led movement to defund EPD has put pressure on the city’s elected officials through rallies at the city civic center, in front of the mayor’s house, and on city streets.

The youth movement, led by activist group Evanston Fight for Black Lives, culminated in a coordinated sit-in outside aldermen’s homes during a July 13 council meeting.

Fleming was the first elected official to come out in support of defunding on June 19, almost a month before any of her fellow aldermen. She said it was time for the city to reconcile its reputation as a “holy mecca of race” with the reality of life for Evanston’s non-white residents.

“Just because we haven’t had a George Floyd or a Breonna Taylor doesn’t mean what we have is working,” Fleming said.

The word “defund” remains contentious among the aldermen: several preferred phrases like “redirecting funds” or language that emphasized the transfer of funding to other city services. Rainey characterized the use of the word as “provocative.”

Braithwaite, who initially clashed with youth activists and members of his ward on defunding before coming out in support July 18, admitted to getting “hung up” on the word in conversations with residents.

“You kind of have to get over that to get to the meaning,” Braithwaite told The Daily.

And, as Wilson noted, there was not yet a consensus on what defunding would mean for the Evanston police.

There was some agreement among the officials, however. The seven aldermen who spoke to The Daily all agreed it was time to reexamine EPD’s $41 million budget, which composes 35 percent of all spending from the city’s General Fund.

Wilson, Fleming, Revelle and Rainey said the city needed to educate residents on when to call police, to combat a perceived excess of 911 calls. Abolishing the police department was not on the table.

However, Fleming and Revelle noted, any attempts to reallocate funds away from EPD would be complicated by police union contracts, along with anticipated budget shortfall in 2021. Revelle suggested the city could recruit graduate students at Northwestern to conduct a comprehensive analysis of the current police budget, since the city might otherwise not be able to pay for it.

Most of the aldermen focused their criticisms on the size of the police budget or scope of their authority. But Fleming pointed to a lack of accountability within EPD and said discipline for officers was rarely more a note in their file or a dressing-down from a superior. Fleming served as the council’s liaison for the since-disbanded Citizens’ Police Advisory Committee.

Rainey is the only alderman who has publicly come out against defunding. Ald. Tom Suffredin (6th) spoke to The Daily declined to commit either way, saying “the only thing we can commit to is a process and a timeline.” Though she said she had become “more critical” of the police budget after taking time to review it, Rainey said she felt the city’s other services were already well-funded and criticized the defund movement as “a bunch of college students” ignorant of the city’s broader issues.

She pointed to the considerable crime in her ward, including the recent fatal shooting of a man at the 300 block of Howard Street on Thursday.

However, Rainey did express interest in using some police funds toward supporting a city-run homeless shelter, and said she was looking forward to Monday’s meeting, though she made a point of noting that any change would take time and that “you can’t just wave a hand and defund.”

She was not alone in that thought – Braithwaite, Wilson, Revelle and Suffredin all expressed roughly the same sentiment.

Fleming also conceded change would be laborious. But for her, this was the moment for the city to decide whether to uphold a false narrative of racial harmony or to face uncomfortable truths.

“Evanston is a city of very great possibility,” Fleming said. “We as citizens make the city that we want to be.”

— Defunding 101: What does it mean to ‘defund the police’ and why is it gaining traction?