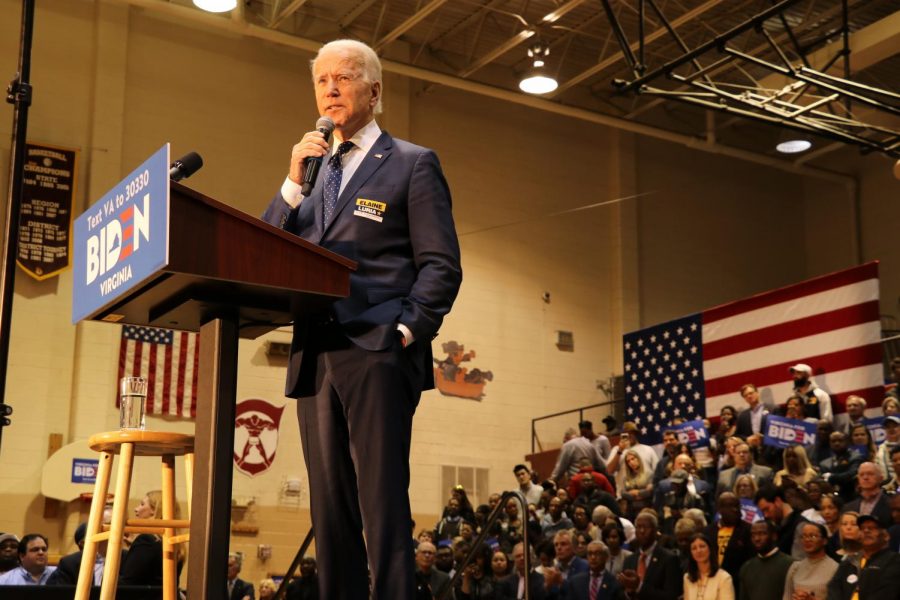 Former Vice President Joe Biden at a rally in Virginia before Super Tuesday. Evanston residents talked about mobilizing behind the candidate at a Tuesday Indivisible Evanston meeting.

U.S. Sen. Dick Durbin (D-Ill.) said he believes Biden is the right candidate for this moment in our nation’s history, calling Biden the most “caring and compassionate” public figure he’s ever met.

Durbin said he believes Biden will heal the nation’s wounds after being torn apart by partisanship. His natural empathy, especially coming from his family’s tragic past, means a lot to voters, Durbin said. When it comes to Biden on the issues, Durbin said it all starts with the struggles of American family life and relating to those struggles on a very personal level.

The senator also pointed out that the Democrats’ chances to flip a number of Senate races are looking promising. Flipping the Senate, Durbin said, is crucial, especially when it comes to ousting Senate Majority Leader Mitch McConnell (R-Ky.), who he said “will not play by any rules” when it comes to matters like nominating a new justice to the Supreme Court.

“This president scares the living hell out of me when he says on television the other day that he’s not quite sure he’ll leave the office if he thinks the elections aren’t fair,” Durbin said. “That has scared me for longer than I’ve been able to say in public.”

Former Evanston resident Eric Salcedo (Weinberg ’97) said he just started on the Biden campaign yesterday as the Midwest Coalition’s Region Director. His job, he said, is to approach the diverse communities across the region and engage them in their native languages to vote for Biden.

Salcedo said it’s trickier during this election cycle to engage these traditionally Democrat-leaning communities that usually rely on organizing methods such as door-to-door canvassing, which has been halted due to the pandemic. The Biden campaign has formed 17 coalitions to target these communities on the ground and round up support, he said.

“We have a League 46 coalition which is made up of (Generation Z) and millennials,” Salcedo said. “It’s young people, so it’s like students for Biden, it is young professionals for Biden, even young elected officials for Biden.”

Evanston resident Jill Wine-Banks said when she decided to run as a presidential delegate, her first choice was Biden because she believed he was the right person to beat President Donald Trump.

Biden’s stance as a middle-of-the-road centrist, Wine-Banks said, would allow him to attract voters that were not necessarily life-long Democrats. She said she knew the risk she was taking, knowing Evanston was a very liberal city, but she always thought Biden was always the natural choice for the candidacy.

Though there will not be the traditional live Democratic National Convention this year that she was looking forward to attending, Wine-Banks said she has been selected to be a whip at the virtual event, calling it “a convention across America.” She said she doesn’t believe this message has been communicated enough and wishes it would because the concept aims to engage more than a physical convention’s audience.

“It’s really the end result that matters, Wine-Banks said. “It’s making sure that people watch Joe Biden and all the other speakers — that people actually pay attention to what the actual platform adopted gives.”