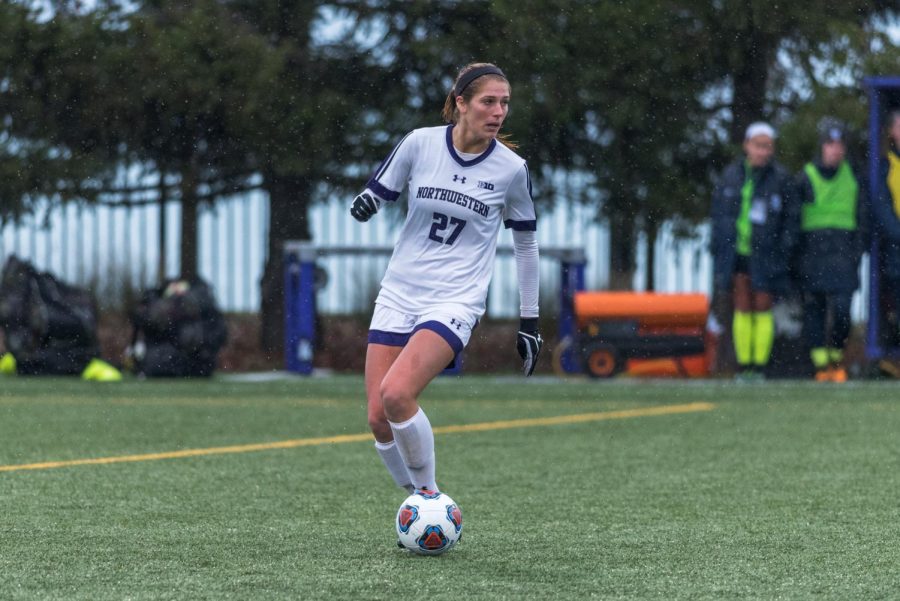 Hannah Davison and Kayla Sharples knew they’d be starting a few days before the lineup was announced for the Chicago Red Stars’ game against the Portland Thorns on July 1. But that didn’t make it any less special for them to see their names next to each other in the starting XI that day.

Davison and Sharples, both center backs, have been playing together for nearly a decade. They were on the same club team in Chicago’s western suburbs, then started together on Northwestern’s back line from 2015-18. They were both selected by the hometown Red Stars in the 2019 National Women’s Soccer League Draft, and after barely playing as rookies, they got their first professional starts together in the second game of the NWSL Challenge Cup in Herriman, Utah.

“I was very excited to showcase everything I’ve been working on since the beginning of last year,” Davison said. “To be able to do that with Kayla also, getting our first start together just seemed right, after everything we’ve gone through.”

Davison and Sharples helped lead the Wildcats to their best stretch in program history — NU advanced to the NCAA Tournament in each of their four years in Evanston. The 2015 team reached the tournament for the first time since 1998, beating Washington State in the first round before losing to West Virginia. But the Cats were even better the following year, winning their first-ever Big Ten title in Davison and Sharples’ sophomore years.

Davison and Sharples were part of a historically strong defense on that 2016 team. The Cats allowed just seven goals in 23 matches, tied for the fewest in the country, and led the nation in goals-against average with 0.29 let in per game. Sharples scored an overtime goal in the regular-season finale against Illinois that gave NU a share of the title.

The Cats defeated Kent State — with Sharples scoring the opener in a 3-0 win — and Southern Illinois-Edwardsville in NCAA Tournament play, then dropped a 1-0 decision to No. 3 Duke in the Sweet 16.

“That year, we didn’t even score a lot of goals,” Sharples said. “We just had to dig deep and get those wins. We were such a close-knit group and had this chemistry on and off the field. I don’t think I’ve been on a team that would do anything for each other like my Northwestern women’s soccer team.”

NU couldn’t quite repeat its 2016 success the next two years, losing in the second round of the NCAA Tournament in 2017 and the first round in 2018. But Davison and Sharples were rock steady. The Cats allowed just 0.68 goals per game and had eight shutouts in 2018, including a streak of 668 minutes and 42 seconds without conceding from August 19 to September 14, the longest such stretch in NU history.

“When we came in my freshman year, we were not that great of a program,” Sharples said. We wanted to make the program desired, and throughout our four years, we did just that. Our legacy is that we would leave everything we had on the field.”

The Red Stars drafted both players — Sharples in the third round, Davison in the fourth — in January 2019. But Sharples played only 13 minutes last season and Davison didn’t play at all. But they learned from some of the best players in the world, including U.S. national team members Julie Ertz, Casey Short and Tierna Davidson.

Davison said she strengthened her mental game last year and adjusted to the NWSL’s speed.

The NWSL was the first American sports league to restart after the COVID-19 pandemic began. Eight of the league’s nine teams are in a bubble in suburban Salt Lake City (the Orlando Pride had to pull out after several players tested positive) and played a partial round robin tournament, followed by a single-elimination postseason that is in progress.

The Red Stars defeated OL Reign in their first knockout game on Saturday and will play New Jersey’s Sky Blue FC in the semifinals on Wednesday night.

The increased attention on the NWSL is giving players a platform to speak out on racial justice and other important issues, and Davison is taking full advantage.

“My decision to use my social media as a platform to amplify black voices, amplify black stories, inform other white teammates, white athletes, white friends, family, how to be an ally, what that really means and how we can show up for them… it’s really important to keep educating ourselves, and I’m glad the league has been very open to our ideas,” Davison said.

Players are staying in their own hotel rooms and are not allowed to leave the hotel except to go to practices and games. Each team has its own floor and elevator, designated meeting rooms and different times to eat meals. Davison said she is passing her free time by reading, playing cards and watching Netflix.

Sharples said she’s been grateful to spend every waking moment with her teammates and build chemistry with them. Her chemistry with Davison, though, has been there for many years.

“We are so similar in the fact that we are competitive and have that fire from within,” Sharples said. “We’re constantly pushing each other, we’re motivating each other. It’s great to have an outlet like that in someone that is right there next to you, making you work even harder. That’s helped in our growth as soccer players, as friends, as people.”