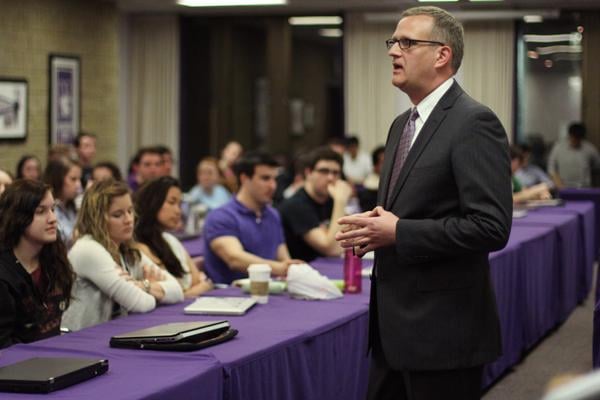 Daily file photo by Hillary Back

Associate Vice President and Dean of Students Todd Adams. Adams will leave Northwestern to start a new position at the University of Denver.

Todd Adams, the associate vice president and dean of students, will leave Northwestern to become the vice chancellor for student affairs at the University of Denver, according to a Monday news release.

Adams will start his new position on Sept. 7, after serving seven years at NU.

“I have been honored and humbled to serve Northwestern in such a unique position to get to know, work with and learn from such amazing students over the years,” Adams said in the release. “I have greatly enjoyed partnering with exceptional colleagues in Student Affairs whose dedication and commitment are an inspiration for me. That is a gift I cherish and will take with me. I will always be a Wildcat, even as I look forward to embracing this terrific opportunity and new challenge ahead at DU.”

A search is now underway for Adams’ successor, according to Vice President for Student Affairs Julie Payne-Kirchmeier. The release stated that Mona Dugo, the senior associate dean of students, will serve as the interim dean.

Adams came to NU in 2013 after serving in several positions at Duke University. According to the release, Adams oversaw multiple areas that provide resources and support to students, including AccessibleNU and the First Year Experience. He also worked to expand Student Assistance & Support Services, according to the release, and “evolved the student conduct area to one that holds inclusion and equity as fundamental values of their work.”

“Todd has brought outstanding leadership, imagination, empathy and compassion, and a strong emphasis on diversity and inclusion to his many student-facing roles at Northwestern,” Payne-Kirchmeier said when she announced the move. “We will miss him dearly, but our entire division is excited for him and this opportunity at a wonderful institution. He has made a lasting impact at Northwestern, and we hope he will carry with him the knowledge that he is forever a member of our family.”