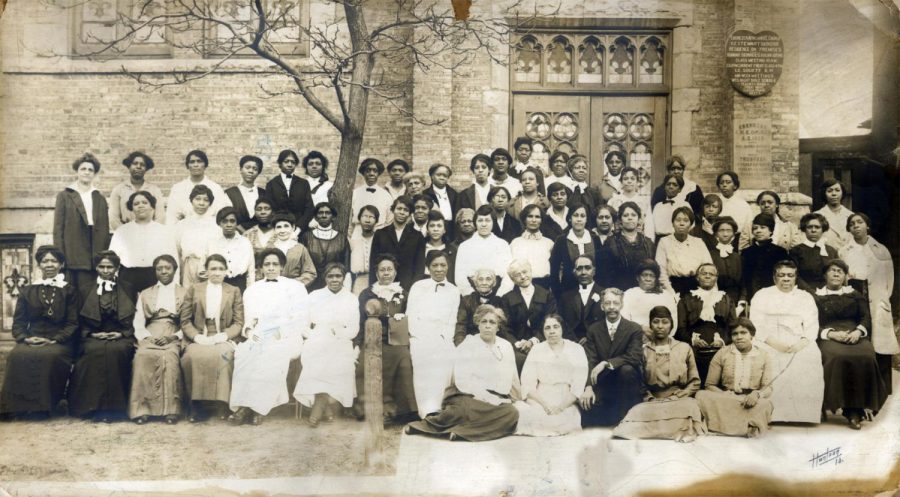 Members of the Sunday School at Ebenezer AME, Evanston’s first black church, circa 1920.

The history of Ebenezer African Methodist Episcopal Church, Evanston’s first black church is one of community, persistence and activism.

Prior to its founding in 1882, black residents attended the predominantly white First Baptist Church. However, many black members of the congregation requested letters of dismission and would go on to become Ebenezer AME’s original members.

Those who left the congregation formed their own Bible study group, which consisted of both Methodists and Baptists and met in various homes and meeting halls across Evanston. As the group grew, it split into Ebenezer AME and Second Baptist Church, the first and second black churches in the city respectively.

Ebenezer AME, which first found a home at 1813 Benson Ave., is one of eight recently named African American heritage sites in Evanston.

The push to recognize Evanston’s black history began in the 1990s through an initiative called Preserving Integrity Through Culture and History which sought to create a historic black cultural district.

“The impetus of PITCH was preserving integrity to culture and history and nothing in there was about architecture,” Robinson said. “It was about the people and the people who lived within the community.”

To jumpstart the program, the first wave of sites will all symbolize firsts within Evanston’s black community.

Ebenezer AME’s status as the first black church in Evanston is not its only trailblazing quality. The church served as a cultural and social hub for black life in Evanston as well as a source of local activism since its inception, Robinson said.

“The black church was always the center of activism throughout history,” Robinson said. “As a community gathering place, you had real leadership there. You had your community leaders attending services there — that was the brain pool.”

Robinson added that AME church leaders and local business owners were active in the fight against Jim Crow laws as early as 1900.

Ebenezer AME members J.S. Woods and William H. Twiggs started a digest called The Afro-American Budget in 1889. Articles ranged from looking at whether or not the African American should relocate to Haiti in light of the maltreatment of black Americans to the role of the black woman in upholding morals and culture in American society.

Twiggs also published Reporter and Directory in 1909, a newspaper focusing on church news as well as civic and social organizations, which Ebenezer AME distributed.

He was not the only activist within the church community. A 1911 Chicago Defender article entitled “Forces are Fighting Jim Crowism” describes how AME’s the Rev. H. S. Graves and another local reverend “charged against Jim Crowism from their pulpits.”

Despite devastating fires in 1907 and 1980, the Ebenezer AME congregation was able to maintain extensive archives of their storied history. This history and Ebenezer’s original home could be included in self guided tours, exhibits and a website, according to a memo written by the city’s Senior Planner and Preservation Coordinator Carlos Ruiz to Mayor Steve Hagerty and aldermen.

The goal, Ruiz wrote, is to “bring to the attention of all Evanston residents the historic and current vibrancy of African American life in Evanston.”

And at nearly 138 years old, Ebenezer AME Church, which has since relocated to 1109 Emerson St., remains a symbol of this cultural vibrance. It is still actively engaged in community service and discourses surrounding Evanston’s black community.

— Evanston Organizes: Evanston’s black community lacked recognition for decades. Shorefront Legacy Center aims to give it to them.