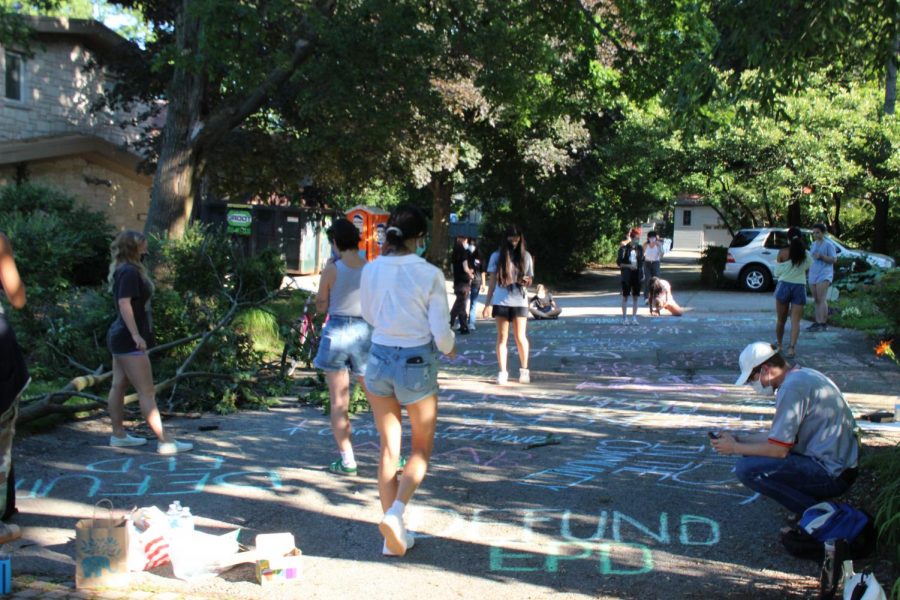 In a series of concurrent protests that spanned the breadth of the city, participants brought their calls to defund the Evanston Police Department to their aldermen’s doorsteps — literally.

Organizers from Evanston Fight for Black Lives coordinated simultaneous protests Monday at homes of seven of the nine aldermen the evening of a remote City Council meeting, as well as making a live statement during the meeting’s public comment period.

By the end of the night, at least one elected official, Ald. Donald Wilson (4th), had newly come out in support of redirecting funds.

High schoolers, Northwestern students and decades-long residents gathered in small groups on their aldermen’s lawns and sidewalks for the sit-ins. Some taped signs and wrote slogans in chalk; others played music on speakers and shook noisemakers to disrupt the council meeting.

Organizers did not schedule protests at the homes of Ald. Cicely Fleming (9th) or Ald. Robin Rue Simmons (5th), as both had already committed to defunding the police. Fleming voiced her support for the cause in a June 19 statement, while Simmons told the Evanston Fight for Black Lives organizers in a private conversation she would support defunding.

In several instances, aldermen exited their homes to speak to protestors. Ald. Eleanor Revelle (7th) told protestors she needed time to better understand the scope of policing in Evanston, and that she and her colleagues were “still learning.”

Organizer and Evanston Township High School alumna Maia Robinson criticized Revelle’s remarks, noting she and her peers had been calling for action since their first protest May 31.

“We’ve been fighting this for over a month,” Robinson told The Daily. “I don’t know how long it takes to read books, but not this long.”

Ald. Peter Braithwaite (2nd) fielded questions from 10 protestors for nearly 40 minutes prior to the council meeting. He encouraged residents to engage in the city budget process, where funding to the police as well as other city departments will be allocated, but declined to commit to defunding.

“We have a pretty good police department that needs work,” Braithwaite said.

As the discussion pushed past the half-hour mark, 2nd Ward resident Anya Tanyavutti turned away and walked back to her car.

“This is a disingenuous conversation,” she commented to another resident.

But at least one sit-in had a distinct outcome. Wilson confirmed in an email with The Daily that he supported redirecting funds from the police to other community services after apparently meeting with protestors outside his home, though he said he did not support eliminating the police.

Police were a common presence at the sit-ins. A police SUV was parked across the street from Braithwaite’s home at the planned start time for the sit-in but left after 15 minutes. A squad car also drove by Revelle’s residence.

Protestors outside the home of Ald. Judy Fiske (1st) said officers in several vehicles arrived to confront the protestors, apparently responding to concerns that the protestors had spray-painted slogans on the sidewalk — the protestors used chalk.

“It’s not the way I want to live, it’s not how I want my tax dollars spent,” said Jennifer Karlovitz, a 22-year resident present at the 1st Ward protest.