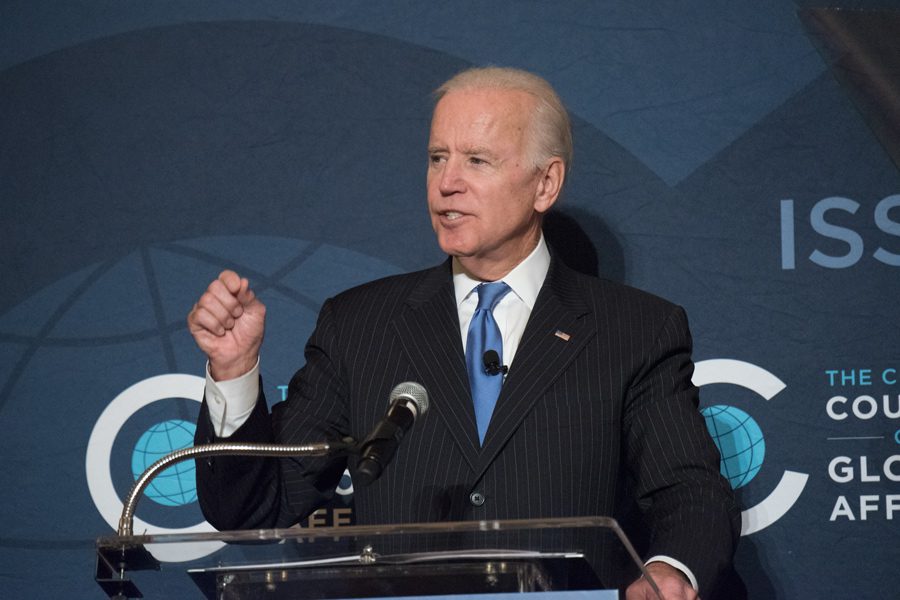 Former Vice President Joe Biden speaks in Chicago in 2017. A recent NU survey found Kamala Harris and Stacey Abrams are at the top of black voters’ preferences for his running mate.

A June 9 survey conducted found that black voters are more enthusiastic about supporting presumptive Democratic nominee Joe Biden when he has a black woman as his running mate.

Political science Prof. Alvin B. Tillery Jr., director of the CSDD, said part of the motivation for the study is that professional pollsters aren’t asking the right questions to the right people.

“If you’re asking black voters, ‘Will you not support Joe Biden if he doesn’t pick a black woman running mate?’ then obviously they’re going to still support him, because they don’t want Trump,” Tillery said. “If you look at the standard horse race polling, the question, ‘How many people of color are in these polls that they claim are nationally representative?’ — it’s typically less than 200 people.”

CSDD’s survey asked respondents about enthusiasm for supporting Biden without comparison to his opponent, President Donald Trump. Tillery said the survey’s wording was carefully constructed to ascertain support for Biden as a candidate, rather than the only option next to Trump. That way, researchers could isolate the effects of a black woman as a running mate. Although the report has been given to prominent Democrats, Tillery said there is no way to know how this survey will impact Biden’s campaign.

Andrene Wright, a graduate student in political science and one of Tillery’s advisees, studies the effects of having a black woman mayor on black political attitudes and behaviors. Wright praised the survey for precisely examining black women’s attitudes about Biden and a potential black woman as vice president.

But not all black women are excited about the survey’s two frontrunners. SESP senior Elizabeth Curtis said she doesn’t particularly support Stacey or Abrams.

“Kamala Harris had a really big part in prosecuting black and brown people in California,” Curtis said. “I think most notably was her act to prosecute parents for their children not going to school, which I think is really terrible.”

Curtis said she doesn’t fully support Abrams either. She attended Abrams’ event at Northwestern last fall and said she was unimpressed with Abrams’ moderate position. However, Curtis said Biden’s running mate choice is not the most important factor for her.

“At the end of the day, my priorities, and the priority of a lot of people who are younger, is to get a candidate into the White House that is going to allow us to continue to do the work of building up our communities,” Curtis said.

Despite disagreements among black voters about Biden and his potential running mates, Wright said she sees this survey as evidence of a united force to vote Democrat.

“Even though we are more excited about a black woman VP, we also understand the gravity of what it means to have Trump for another couple years,” Wright said. “We’re still going to end up showing up at the polls. And so I think that’s exciting to have some data out there that shows that.”