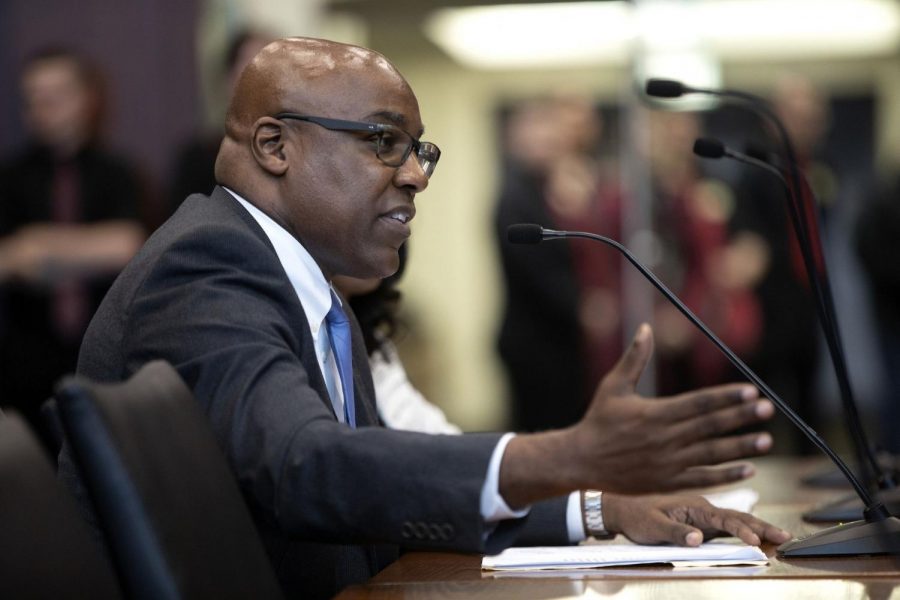 Illinois Attorney General Kwame Raoul at a hearing in 2019 at the Michael A. Bilandic Building in Chicago. Northwestern is participating in a lawsuit filed by Raoul and 17 other state AGs.

Northwestern announced Monday it is participating in a lawsuit filed against the Trump administration by Illinois Attorney General Kwame Raoul and 17 other state AGs. The lawsuit alleges that last week’s directive from U.S. Immigration and Customs Enforcement is harmful to both international students and their universities.

“ICE’s arbitrary new rule harms both international students and the institutions where these students contribute to creating a diverse and culturally vibrant academic environment,” Raoul said in filing the lawsuit. “Announcing this rule in the midst of the COVID-19 pandemic has created additional confusion and upheaval for students and universities already facing uncertainty caused by the pandemic.”

On July 6, ICE announced that international students would risk deportation if their course load consisted entirely of online classes. This lawsuit alleges the rule violates the Administrative Procedure Act “because it provides no justification for the sudden change in immigration rules and fails to consider the significant burden of the regulation on universities and students,” according to a University release.

In NU’s declaration to the court, Annelise Riles, the executive director of the Northwestern Buffett Institute for Global Affairs, wrote that the rule has already caused “significant stress” for NU’s international student population.

“Moreover, the loss of international students in courses will irreparably harm the development of all students, as innovative ideas are sparked when students and scholars from around the world gather to think, debate and collaborate together,” Riles said. “Northwestern’s stature as a world-class research university depends on the presence and wellbeing of diverse students from around the world.”

The University is also mounting lobbying efforts in Washington D.C. to try and roll back the rule, according to a University release.

The announcement comes after University President Morton Schapiro said last week that NU would be joining an amicus brief supporting a lawsuit filed against The Department of Homeland Security and U.S. Immigration and Customs Enforcement by Harvard and the Massachusetts Institute of Technology.

Higher education has come out in droves against the guideline. Nearly 60 colleges and universities have signed the amicus brief. The University of California system recently announced plans to file a similar lawsuit against the federal government. Johns Hopkins University also filed its own litigation.

— What the new ICE regulations may mean for international Northwestern students