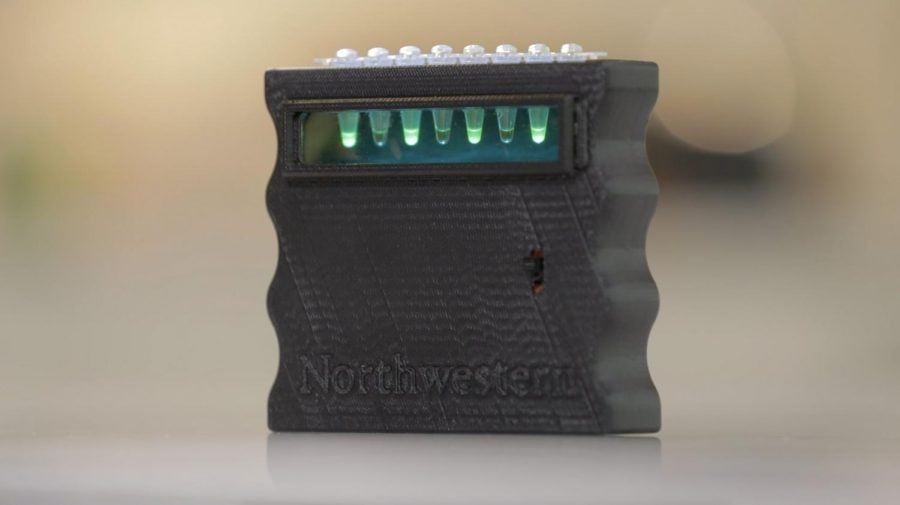 ROSALIND, the technology developed by researchers in McCormick Prof. Julius Lucks’ laboratory. The green test tubes indicate a higher concentration of a contaminant than the EPA standard.

Researchers in McCormick Prof. Julius Lucks’ laboratory have developed new technology that can detect contaminants in drinking water in minutes.

The technology, called ROSALIND, stands for RNA Output Sensors Activated by Ligand Induction and pays tribute to Rosalind Franklin, an influential English chemist who is often credited for discovering the molecular structures of DNA and RNA along with James Watson and Francis Crick.

“Where ROSALIND really shines is that you can test (the water) on-site, and it takes minutes to get results instead of weeks,” Jung said. “(Current testing technologies) take weeks to get results, you have to ship your water, and there’s concern about water composition changing during the shipping process and not getting accurate results.”

ROSALIND tests 16 different types of compounds, including lead and copper, by adding water to test tubes inserted into a device containing indicators for each type of compound. If a test tube turns green, that means the water is above the EPA threshold for that particular compound.

Alam said that ROSALIND’s affordability and convenience can help solve the widespread lead crises in drinking water in parts of the United States, including Chicago.

“We’re all familiar with Flint, Michigan, but the reality is that over 70 percent of homes tested in the city of Chicago have elevated levels of lead,” Alam said. “These problems disproportionately affect our most vulnerable populations. Those are the populations that don’t have the ability to pay hundreds of dollars to send a single sample of water to a chemical analysis laboratory to find out if their water is contaminated.”

McCormick Prof. Jean-Francois Gaillard, another author of the study, compared the accessibility and functionality of ROSALIND to a commonly used at-home test.

“It’s like a pregnancy test for water because you get the answer right away whether or not the metal or antibiotic is above a certain concentration level,” Gaillard said.

Alam, who now runs his own biotechnology startup called Stemloop, envisions a day where ROSALIND is used by people around the world to solve the world’s water cleanliness problems.

“It’s inexpensive to produce, it’s incredibly easy to use, and that makes it amenable to use as a democratized way of testing water quality,” Alam said. “The vision is to mass-produce a test that’s easy enough for anybody anywhere in the world to be able to detect whether these toxins are in their water.”

Correction: A previous version of this story misidentified Kirsten Jung as a postdoctoral fellow. She is a Ph.D. candidate. The Daily regrets the error.