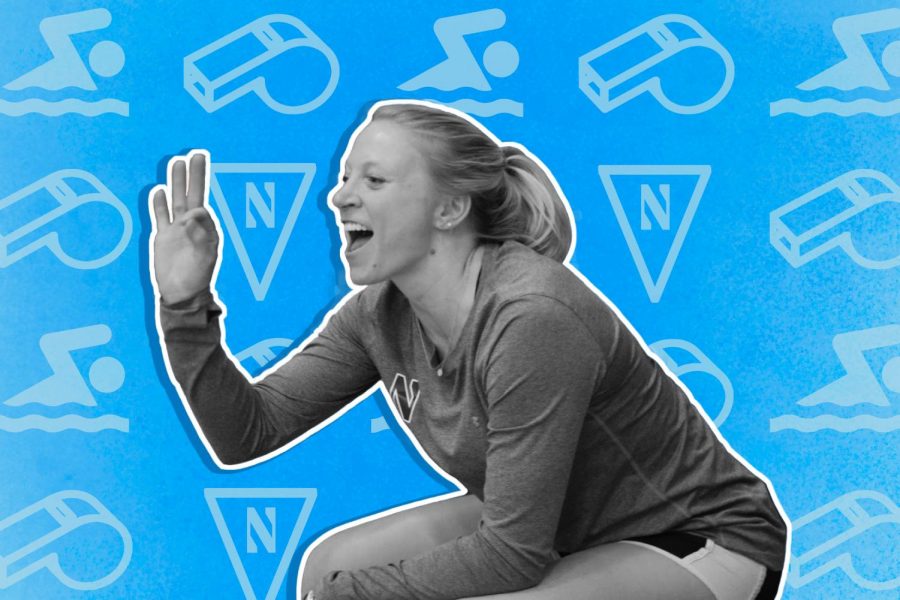 Katie Robinson was named the director of men’s and women’s swimming and diving last month.

Katie Robinson has been coaching for as long as she can remember.

The newest director of Northwestern’s swimming and diving program and head coach of the combined swim program described her childhood experiences with coaching as setting up obstacle courses for her siblings to race through. As if foreshadowing her future career as an athletics coach, she said she even had a stopwatch prepared for these races.

Coupled with her natural talent and affinity for the water, Robinson swam for the University of Texas at Austin. There, she met her mentor and role-model Jill Sterkel, an Olympian and the head coach of the women’s swim program at UT-Austin.

“The impact that (Sterkel) had on me was phenomenal,” Robinson said. “More than just teaching me how to swim faster; she really encouraged me to believe outside of where I thought I could be. I wanted to grow up and be like her. When you admire somebody so greatly, it’s an honor to be able to try your best to be a tenth of what they were for you.”

After graduating from UT-Austin in 2007, Robinson coached at the University of Virginia, Rutgers University and Tulane University before coming to NU as the associate head coach in 2018.

What stand out to Robinson about NU are the “world-class administration” and the “extremely intelligent,” “eccentric” and “fun-loving” swimmers.

“My favorite part (of my job) is getting to coach the student-athletes on the team and mentor them,” Robinson said. “I love what I do, which is inspiring and believing in them (and) not letting them settle for less.”

Weinberg senior DJ Hwang, a member of the men’s swim team, described Robinson as an avid supporter of each athlete’s goals, and he doesn’t think her support will wane now that she is the head coach of the combined program — specifically, one of six female coaches leading any gendered swim team in the Power 5, according to SwimSwam.

“As a head coach, you have 20 to 30 athletes to look out for as well as the goal of the team, but Katie really cares about every individual and their goals and aspirations,” Hwang said. “That’s definitely hard to do with the kind of… position she has.”

Hwang also discussed the role Robinson played in his training when he had foot surgery his sophomore year, even though she doesn’t typically work with him. Unable to push off the wall, Hwang had to swim in circles along the perimeter of the diving well, which he said got boring after two practices.

“Katie came along one day, and she wrote up something different (and) creative for me to do,” Hwang said. “There wasn’t much you (could) do with the kind of limitations that I (had), but she was willing to put in the time, work and effort to work with me individually to make sure I was getting the best out of my time.”

Recent graduate and athlete Olivia Johnson also swam under Robinson’s tutelage at Tulane University. Robinson’s strength for establishing a personal connection with her swimmers and her bubbly personality drew Johnson to the New Orleans school, she said.

Once she was there, Johnson said she was not disappointed by the lengths that Robinson went to spread joy and inspiration on her team. Once in her sophomore year, Johnson recounted, Robinson and the Tulane assistant coach dressed up in “ridiculous costumes” and made the swimmers laugh with their “crazy” antics. On another instance, Robinson celebrated a one-point win in a three-way dual meet by blasting music on a boom box, Johnson said.

Robinson’s commitment to mentoring and supporting her athletes goes beyond institutions and how old her swimmers are.

“I will always view her as a mentor,” Johnson said, who graduated this spring. “Even though she’s not my coach anymore, I know that she still supports me, and I support her in what she does.”

Robinson said she will be giving the coaches more freedom in their coaching when the team returns to train, and she looks forward to what the new season holds.

“I’m excited to give them some autonomy and to really empower them as coaches and to help them continue their own path and the coaching world,” Robinson said. “It makes me extremely fulfilled from an authentic standpoint (to work with the Northwestern family), and it makes me want to be here forever. I’m excited about that.”