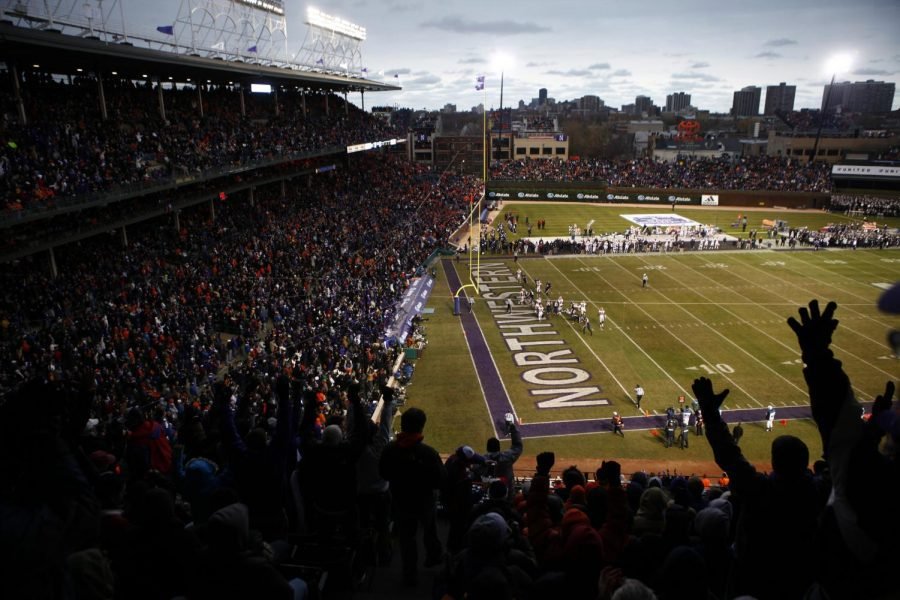 Northwestern fans celebrate a touchdown against Illinois in a 2010 game at Wrigley Field. A Nov. 7 football game between the Wildcats and Wisconsin will no longer take place at the Friendly Confines

A Nov. 7 football game between Northwestern and Wisconsin will no longer take place at Wrigley Field, according to a press release from the Wildcats’ Department of Athletics and Recreation.

The decision — made in conjunction with the Chicago Cubs, state and local authorities and the Big Ten conference — was called “a disappointing conclusion to reach” by Combe Family Vice President for Athletics and Recreation Jim Phillips, “but absolutely the right one” amid health and safety concerns due to the COVID-19 pandemic.

“The uncertainty of football and baseball schedules, and the possibility of limited attendance, made this an easy choice to make for our student-athletes and fans,” Phillips said. “We’re grateful for our outstanding partners from the Cubs, and look forward to bringing the passion and pageantry of college football gameday to the city’s North Side when we can do so safely and securely with a packed house.”

According to the Chicago Tribune, a team spokesman said it is “safe to assume” the conference matchup will move to Evanston. Additionally, NUSports.com changed the game’s location to Ryan Field.

NU last faced the Badgers in Evanston during the 2018 season. On that October afternoon, the Cats upset No. 20 Wisconsin 31-17, a win that marked the beginning of NU’s journey to its first Big Ten Championship game.

The Cats last played at the Friendly Confines in 2010 against Illinois, the stadium’s first college football game since 1938. Despite falling 48-27 to the Fighting Illini, the “Wrigleyville Classic” brought 41,058 fans and ESPN’s College Gameday to Chicago’s North Side.

In light of the game’s success, NU and the Cubs created an “innovative event and marketing partnership” to bring more Cats sporting events to Wrigley Field. Since the agreement, two NU games have been played at the Cubs’ home park. In April 2013, the Cats’ baseball team defeated Michigan 6-0. A little over one year later, NU’s women’s lacrosse team beat USC 12-7.

In addition to the 2020 clash against the Badgers, the Cats scheduled football games at the Friendly Confines for the 2022, 2024 and 2026 seasons.

“We wanted to be able to show the guys really what they’re going to be able to experience,” said Coach Pat Fitzgerald on the May 24, 2019 edition of 247Sports’ The Notorious B1G recruiting podcast, “and then just take full advantage of what Chicago has to offer, which is obviously right here in our front yard.”

Additionally, the Cats’ Twitter account called Wrigley their “second home” when the game against Wisconsin was announced.

Despite the continuous spread of COVID-19 and more than 150,000 cases in Illinois, NU football is preparing for a 2020 season. The team — along with the Cats’ men’s and women’s basketball programs — began limited voluntary workouts in Evanston on June 22.

This past Monday, the leaders of the Power 5 conferences — of which the Big Ten is a part — announced that they will wait until the end of July to make any decisions regarding the start of the 2020 season, according to ESPN. On Wednesday, the Ivy League became the first conference to cancel all fall sports. One potential option for the Big Ten is a ten-game schedule with only conference matchups, according to a report by Tom Dienhart of GoldandBlack.com.

If the season proceeds as planned, NU will open its 2020 campaign on Sept. 5 in East Lansing against Michigan State.