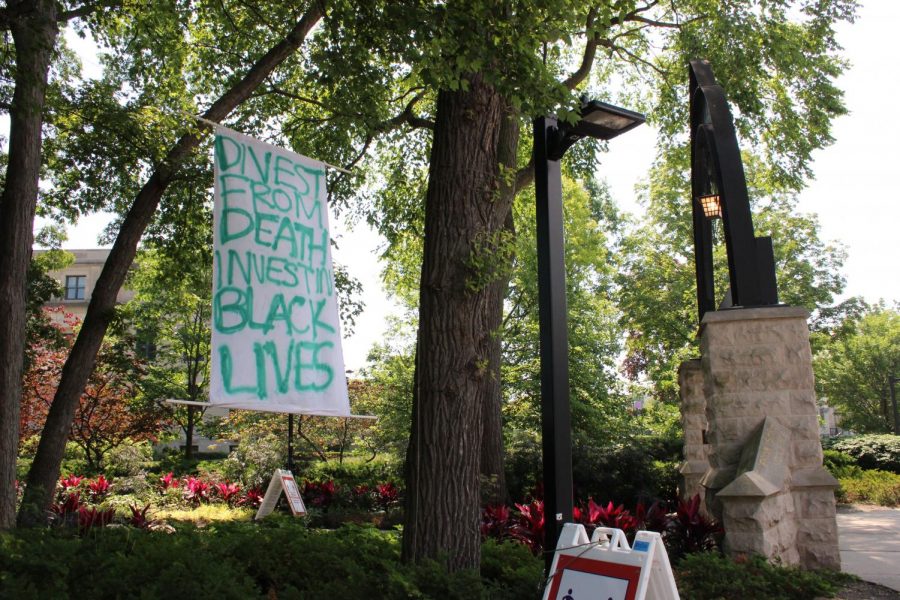 A sign hanging near the Arch on June 19. The sign was originally hung over the Arch, but was moved adjacent to it.

On June 19, while some students watched Northwestern’s virtual commencement ceremony, around 70 others walked from President Morton Schapiro’s house, down Ridge Avenue, Emerson Street, Sherman Avenue and Davis Street, shutting down several areas along the way.

They also made stops by the Northwestern University Police Department and in downtown Evanston.

The protest, led by the group NU Community Not Cops, called on the University to divest from all law enforcement agencies at NU, with the slogan “Disarm. Defund. Disband.”

“As black students who go to this University and have been witnesses to all the anti-black things Northwestern has done, not just as an institution but on an individual level, professors, faculty, staff, etc., we realized we can do more,” said LaTesha Harris (Medill ’20), the media liaison for NU Community Not Cops. “We can speak up more as students. We can hold our University accountable for the things they say that they do and the things they say they want to do.”

Harris emphasized this work isn’t anything new, and builds on the work of students that have come before them.

A June 3 petition from students to top administrators, which has since garnered over 8,000 signatures, called on the University to divest from law enforcement and invest in “life-giving institutions,” including allocating resources and funds to activist groups.

Student representatives met with some University administrators on June 23 via Zoom, but the administrators present couldn’t give specifics on what actions the University plans to take to address the issues presented by the students. Schapiro and Interim Provost Kathleen Hagerty were not present.

“As we said in our message of June 14, we are reviewing all of NUPD’s approaches and functions,” Schapiro said in an email interview with The Daily after the event. “Moreover, we are reviewing all University policies, procedures and processes related to creating and supporting a safe and healthy community. The students, staff and faculty on our NU Police Advisory Board will play an important role in reassessing programs and communications regarding public safety concerns, including our relationships with the Evanston and Chicago police departments.”

The Office of the President added that Schapiro will be unavailable for live interviews throughout the summer.

During the meeting, students also asked what leaders were doing to educate themselves. In response, Vice President for Student Affairs Julie Payne-Kirchmeier and Associate Vice President and Dean of Students Todd Adams said they had been undergoing training and self-education.

The Daily also asked Schapiro this question after the meeting. Schapiro said he continues “to read, to watch and to listen.” He added that Ava DuVernay’s documentary “13th” was “illuminating” to him.

At the meeting, administrators said they would share specifics for a mid-July meeting. But for many students, that seemed to contradict the urgency of the situation.

The student representatives published a response to the Zoom meeting, writing that administrators were “woefully unprepared” for the discussion. They added that they received vague answers to their questions and “individual solutions to systemic problems.”

“The time for decisive action is long overdue. We can’t wait. Defund the police and invest in black students, staff, and faculty now,” the letter stated.

The students also expressed concerns that the meetings administrators were having did not include an abolitionist perspective. They said the University cannot adequately address their demands without such a perspective. The letter included links to abolitionist literature and toolkits.

The letter emphasized that the students who wrote it did so while taking finals, writing dissertations, caring for family members and more, all amid a pandemic. They added that they expect the University to show respect moving forward by being more prepared with action items, plans and timelines.

“It is insulting that administrators continue to use their busy schedules as an excuse for not having concrete answers in response to demands that have been made and reiterated by generations of black students,” the letter stated. “If students can create space and time to develop concrete solutions to systemic issues, then administrators — who are paid to do so — can certainly follow suit.”