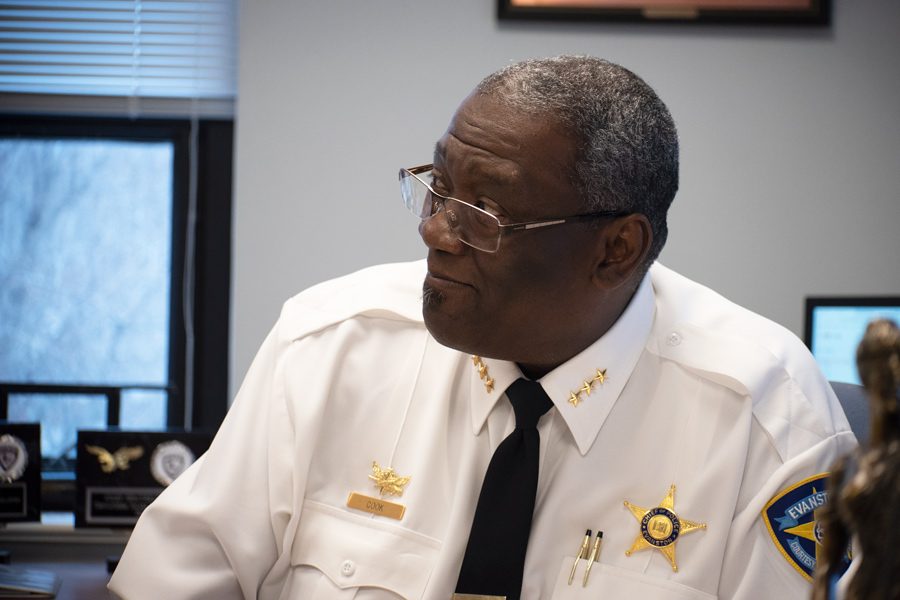 Evanston Police Department officers and Mitchell Davis III, the incoming president of the Illinois Association of Chiefs of Police, discussed police training in a Monday discussion. The event was the first in a series hosted by Mayor Steve Hagerty, which has been organized to help inform the City Council’s next steps on local policing.

Hagerty questioned how police training impacts policing in schools. In the past few weeks, Evanston residents have criticized EPD for its police presence at Evanston Township High School. Davis said policing in schools can have a positive impact if officers are trained correctly. Davis also said both the prejudiced culture and implicit bias ingrained in law enforcement have contributed to a policing problem.

Hagerty then inquired about the qualifications required to become a police officer in Evanston. EPD Sergeant Gil Levy said officers must have received a high school diploma or GED equivalent, as well as 60 hours of college credit, although most EPD officers have a college degree. New EPD hirees are sent to a police academy, where they complete the training required by the state of Illinois, including defense and control tactics, firearm training and law training in a classroom.

Officers must pass a state certification exam to continue on to the police department, after which they enter a 20-week field training program. During this program, they are paired with a field training officer, who evaluates them daily and weekly. Officers are on probation for two years after being hired, which means they do not receive union protection.

“We recognize the fact that the training that the officers have received in the police academy… may not be specific to the city of Evanston, things that we want them to come away with,” Levy said. “That’s why we have such a long, in-depth field training program, to kind of give it our own blend of training mixed in with what is required by the state.”

Davis said training in police academies is dictated by the Illinois Law Enforcement Training and Standards Board and any academy in the state will have the same training elements. The standards board also develops the state certification exam.

Hagerty also brought up the killing of George Floyd in Minneapolis, and the officers that accompanied Derek Chauvin who failed to intervene as he knelt on Floyd’s neck. Davis said that historically, intervention and reporting within police departments have not been pushed in policies and procedures.

“Policies and procedures are supposed to be guidelines, they don’t cover every little thing but that’s where culture comes into place. For somebody not to have the wherewithal to have stopped (the George Floyd killing) was a cultural thing,” he said. “Putting systems in place so that officers are not only held accountable from a policy standpoint, but they’re safe… to report these officers and report these circumstances, all those things have to be taken into account for things to happen.”

Evanston Police Chief Demitrous Cook said accountability within departments is far more prevalent now compared to the past. Currently, Evanston police officers on the scene are expected to speak up upon witness of other officers’ misconduct.

When asked about mental health, Cook said around 95 of the 160 EPD officers have completed “critical” incident training on handling mental crises, and that mental health continues to be a crucial component of training.

Hagerty then asked Davis if too much is being expected of police departments, which Davis refuted. Many social services have been defunded and, as a result, Davis said responsibilities around homelessness, mental health and substance abuse have fallen on law enforcement. However, he said the extra responsibilities have not come with extra funding.

“We adapt and conquer, we keep going, we train our officers to try and equip them the best we can,” Davis said. “I don’t (think the community is asking too much) because, once again, we do what we do, but there are areas where we can improve to provide us with assistance.”