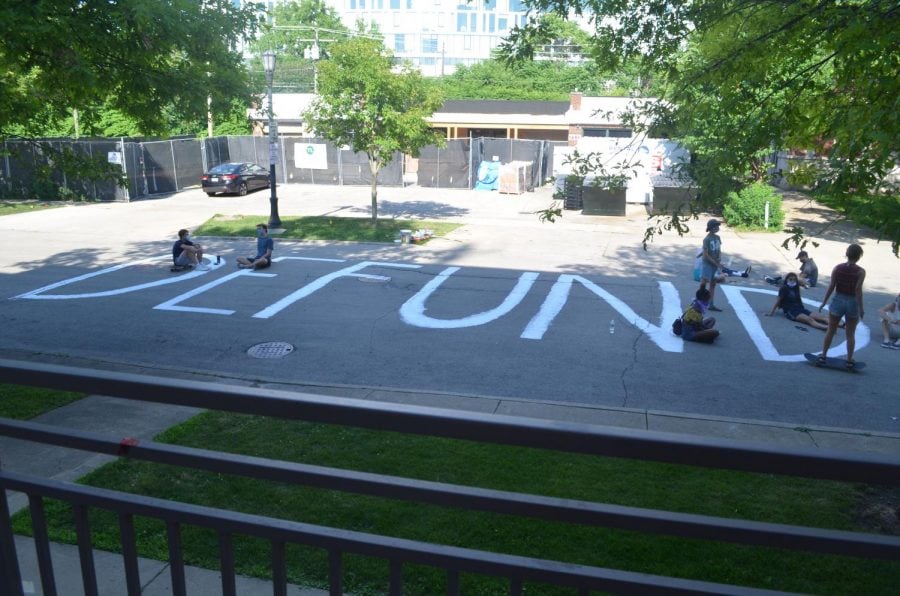 More than five weeks after George Floyd’s death, which has spurred nationwide protests against racial injustice and calls to defund the police, the holiday weekend of July 4 was a weekend of anti-racist street painting in Evanston.

The Evanston Township High School basketball team painted “BLACK LIVES MATTER” on the street outside the school with the support of the school and the city. Two days later, a group of Evanston youth painted “DEFUND EPD” on the street outside the Evanston Police Department precinct and, according to the participants, they may face charges. Both phrases have since been either splattered with paint or washed away.

According to Head Basketball Coach Mike Ellis, the team was inspired by a nationwide street painting trend in support of Black Lives Matter, which started in Washington D.C. The effort was pushed by the students, including ETHS senior Blake Peters, Ellis said.

“It says Black Lives Matter, but it means a lot more than that,” Peters said. “We want to say that black lives are appreciated, loved and cherished, too.”

ETHS alum Garrett Jones was among the several ETHS alumni and former team members who attended the street painting. Jones noted the momentum the Black Lives Matter movement had gained in the weeks after Floyd’s death and emphasized the importance of continuing that momentum.

Assistant Coaches Jetter Gibson and Rudy Meo also attended the action, saying they hoped it would bring awareness to the Black Lives Matter movement. They both emphasized the support the team received from school administrators and the city.

The city supported the event by closing several blocks along Dodge Avenue. An EPD police car was stationed at the end of the street to enforce the closure.

Sometime between Friday evening and early Saturday morning, white splatter paint was applied to the word “black” in “BLACK LIVES MATTER.” According to Evanston resident Meleika Gardner, the words were splattered over sometime between Friday evening and Saturday morning. ETHS Assistant Superintendent and Principal Marcus Campbell posted a photo of the paint, calling attention to the color white being used in the attempt to “destroy” the Black Lives Matter message.

Officials have video footage of the act, but cannot currently identify who was involved, according to Gardner.

Evanston youth began painting the street outside the precinct at 2:30 p.m. on Sunday. Unlike the basketball team’s activity, the youth-led event was not city-sanctioned.

According to ETHS alumna Mollie Hartenstein, when police arrived with a hose, the painters decided to guard the street until the letters dried. At that point, the police informed the painters that the action was illegal before taping them and recording their identities. As of Sunday evening, police have been washing the words off the sidewalk, according to footage on Facebook Live.

The action was partially in response to the basketball team’s action, which Hartenstein called “performative.” She added that the city’s response to the action highlights where the city stands politically.

“The act of what we did and what the basketball team did is exactly the same,” she said.

If the city is willing to support the basketball team’s message but not the “defund” message, that is telling of their stance, Hartenstein added. Several ETHS alumni echoed this statement, including one who chose to remain anonymous due to the potential legal risk of being associated with the event.

“It’s a lot easier to be complacent, and be in full support of things that are easy to do,” she said, referring to the basketball team’s words as a declarative statement lacking actionable steps.

Evanston Fight for Black Lives, a new organization led by eight ETHS alumnae that was not affiliated with this event, released a statement following the basketball team’s street painting. The statement fully supported “the labor, power, and importance in professing Black Lives Matter,” but criticized the action at the same time.

In their statement, they called for ETHS to remove ties with EPD and presented data on race and criminalization at ETHS.

– The Women Behind Evanston Fight for Black Lives