In aftermath of Pride parade cancellations, caravan of LGBTQ+ youth and their parents drive around Evanston 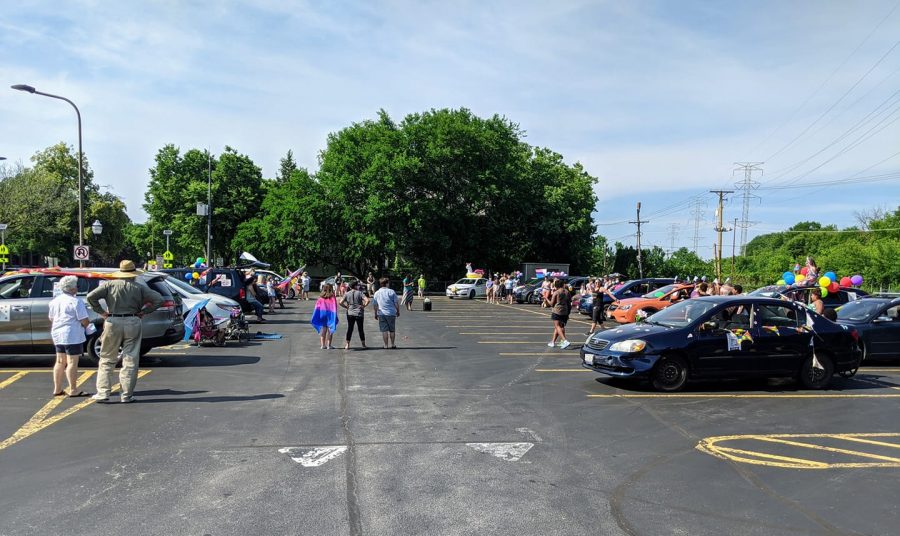 Part of Sunday's Pride caravan. The caravan helped residents celebrate Pride Month without a parade, which was canceled due to COVID-19.

When Evanston canceled its very first Pride Parade, Karla Thomas organized a grass roots Pride caravan in response. At the event, Thomas encouraged participants who wanted to transition the caravan into a small block party to buy their food from black-owned business YoFresh Yogurt Cafe.

According to Thomas, who is a black lesbian and a mother to a gender-fluid child, the caravan event showed what can happen when communities unite, particularly the BLM movement and LGBTQ+ community.

“There is ‘No Pride for Some, without Liberation for ALL!’” Thomas said in a typed statement. “Having LGBTQIA youth in the caravan and driving them through their actual community of friends and neighbors who cheered them on was magic! Having five youth take the mic at the final gathering and speak from their hearts, and speak of their resilience, and encourage other kids to stand strong in their identity and never let others tell them that they are not valid and worthy was LIFE!”

The Pride parade in downtown Chicago was also canceled due to the COVID-19 pandemic and had been scheduled for Sunday. As a result of the Pride parade cancellations, thousands of LGBTQ people are celebrating with small gatherings of friends, and reflecting on what pride means to them, throughout the year.

Marco Mazzetta, a gay resident of Wheeling, went to his first Pride event last year at a party in Chinatown. He said the event was the first time he felt a sense of community among queer people in his life.

“Pride in essence is being able to fully be myself and that is in terms of my sexual identity but also in my presentation and manners, like being flamboyant and feminine or reserved and introverted, without having to be self-conscious about it, without having to think about it,” Mazzetta said. “Feeling safe in the place that I’m at and being able to express myself among my queer peers.”

Lucien Dante Lazar is a multifaceted artist and musician who grew up in Evanston. He has been to four pride parades since he first realized he was gay at 16.

Before Lazar went to his first Pride parade, he said he didn’t know there were enough queer people to fill the streets of a neighborhood. Lazar characterized past parades as crowded and jubilant.

“You get to see in real time how many queer people exist,” Lazar said. “At my first Pride, my first impression was .. (that) the fact they can fill an entire neighborhood is mind-blowing to me.”

Lazar said this year’s cancellation is an opportunity for people to find pride in themselves.

“Pride means I am proud of being a gay man, and proud of my sexuality,” Lazar said. “It represents the courage to value and live as an authentic human being even in the face of oppression and violence and homophobia…to be proud as a gay man is a politic and evololutionary back of resistance to the status quo.”