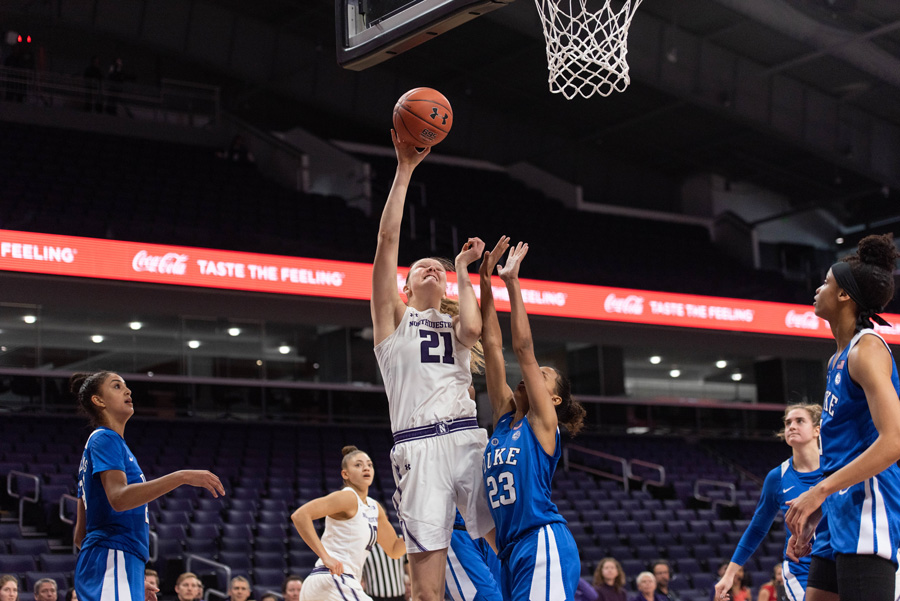 Abbie Wolf goes up for a shot. The former Northwestern center officially signed with Club Deportivo Zamarat — a women’s basketball club in Zamora, Spain — on June 24.

Abbie Wolf is heading to Spain for the next stage of her basketball career.

The former Northwestern center has signed with Club Deportivo Zamarat, a women’s basketball team located in the city of Zamora, according to a press release.

“I knew going into the season I had an opportunity to play,” Wolf, who was a key part of the Wildcats’ run to the 2020 Big Ten regular-season title, said. “Bigs are in demand more than guards are. It’s a lot easier to be a big averaging 10 points than a guard because it’s a lot more competitive.”

Wolf joins one of the newest teams in Spain’s Liga Femenina de Baloncesto. CD Zamarat — who was promoted to the league in 2011 — has struggled in recent years and finished in 13th out of 14 teams last season.

The Greenwich, Conn. native concluded her NU career in style by earning an All-Big Ten Honorable Mention for her senior campaign. She set career-high averages with 11.3 points and 6.6 rebounds and blocked 44 shots, the sixth-most in the conference.

Wolf’s journey to CD Zamarat began at the end of March when she signed with Jorge Méndez of PRODEP, a sports agency specializing in international women’s basketball. Two weeks later, Méndez contacted her with an opportunity to play in Zamora, a city 40 miles from the Portuguese border.

“He said, ‘this would be great for you to grow and get a good amount of playing time,’” Wolf said.

After speaking with some of CD Zamarat’s returning players, Wolf accepted a contract offer from the team in late April. The official announcement of her signing came almost two months later because the club had yet to finalize its roster.

Standing at six-foot-four, Wolf will likely play center since she is the team’s tallest player. In Zamora, she expects a scheme similar to the Cats’, with responsibilities to crash the boards and nail layups. However, Wolf said playing in Spain may allow her to try new moves.

“Maybe I’ll have more freedom,” Wolf said. “Just go to the short corner and move to the basket. You know, I (want to) explore and really play through my rookie year and learn a lot and challenge myself.”

It is uncertain when Wolf will go to Spain because the Liga Femenina de Baloncesto, which usually runs from October to April, has yet to announce a new schedule in light of the COVID-19 pandemic. But Wolf, currently in Cabo San Lucas, Mexico, is still training hard by working on her shooting and dribbling at local schools and parks.

When it is safe enough to fly across the Atlantic, Wolf said she is excited to don the orange jersey. Even though CD Zamarat is a rebuilding franchise, she is optimistic about the club’s future. The team recently hired a new crop of assistant coaches and almost beat some of the best teams in Spanish women’s basketball last season, according to Wolf.

Anticipating her move to Spain, Wolf, who took two quarters of Spanish at NU, is reacquainting herself with the language through TV shows like “La Casa de Papel,” or “Money Heist.” She said she looks forward to participating in Spanish culture by taking part in local events and visiting cities such as Madrid, where her cousin lives.

“I knew I wanted to be in Spain,” Wolf said. “It is one of the best countries to play in Europe. I don’t know how long we’re going to play, but I have a feeling my rookie year is going to be a lot of fun and so exciting.”

— Women’s Basketball: Abbie Wolf joined Northwestern without her own post-up game. Now she’s the anchor inside for the Big Ten champs