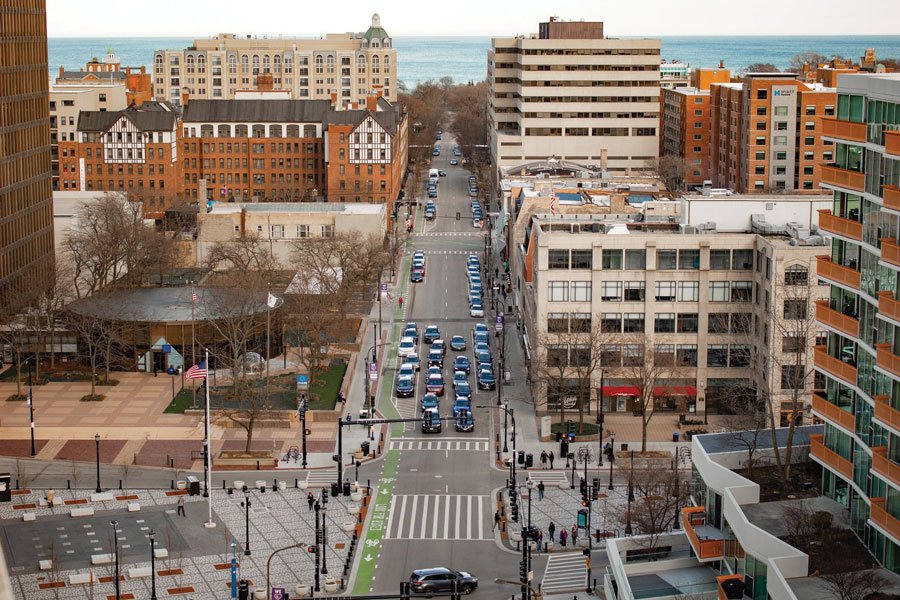 A view of Evanston from above. The Panera Bread located at 1700 Sherman Ave. closed its doors permanently, and five more stores in downtown Evanston have closed within the past year.

The Panera Bread restaurant in downtown Evanston has closed permanently.

The restaurant, located at 1700 Sherman Ave., was a community staple for over 19 years.

The closing of the restaurant was hard news for Evanston residents, including Northwestern students, many of whom left the Evanston campus in March.

McCormick Professor Emeritus and Evanston resident Elmer Lewis used to carry out meals weekly from Panera Bread, mainly sandwiches, before his wife had to adapt to new dietary restrictions.

“Usually when … we needed something to eat at home, as we live just half a mile north of there, I would just run down and pick something up if we didn’t want to cook that night,” Lewis said.

Whether it was for food or studying, Northwestern students flocked to Panera Bread for comfort and convenience.

McCormick sophomore Marco Contreras typically visited the Panera Bread after working out in the evening when most dining halls were closed.

“It just hit me in my soul,” Contreras said about the closing. “I love that place so much; it’s one of those (places) where you feel the connection.”

“It kind of felt like a little slice of home,” Weinberg sophomore Delaney Bondoc said. “(It was) a space that kind-of looks the same (and) has (a) similar ambiance as the ones back home. It will be an adjustment for sure (now that it’s closed) because there’s not that many places like that in downtown Evanston.”

During the school year, Bondoc would study at Panera Bread with her friends every Saturday afternoon. She said they chose Panera because of its study atmosphere and the fact it wasn’t crowded, unlike some coffee shops.

“You would see a lot that went down in that Panera,” Bondoc said. “We would just sit there in our little corner and watch people.”

Six stores have closed their locations in downtown Evanston in the past year, according to Annie Coakley, executive director of downtown Evanston. Given the financial strains that some households feel during the pandemic, people are less likely to spend money.

However, Coakley said members of the Evanston and Northwestern community shouldn’t mourn the loss of these stores for too long.

“We do as much as we can (to) keep the downtown inviting and exciting,” Coakley said. “We always have interest (from) retailers and restaurants.” In addition, Andy’s Custard is currently looking into a new location in Evanston, she said.

New stores to expect in downtown Evanston are bubble tea store Happy Lemon, anticipated to be located at 1607 Chicago Ave., and Reza’s Restaurant, a Mediterranean and Persian restaurant that will replace Pete Miller’s Seafood & Prime Steak at 1557 Sherman Ave.

Correction: A previous version of this story had the incorrect name of one of the anticipated stores. The article has been updated to reflect its name and include the date of Panera Bread’s closure. The Daily regrets the error.

— In Focus: Independent businesses in Evanston deal with declining support