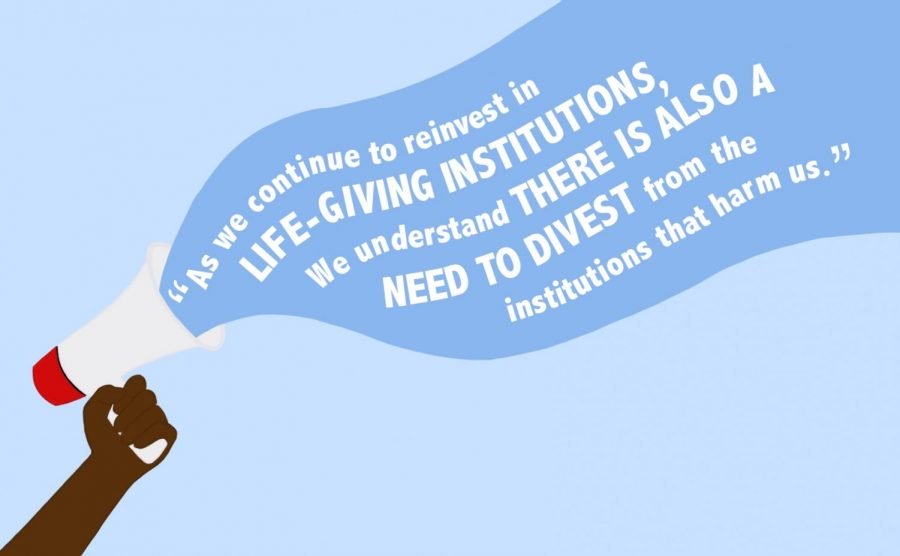 A quote from the letter written by black student organizers. University administrators said they will propose specific actions later in the summer addressing students’ demands.

Northwestern administrators said they would come up with specific actions to address students’ demands regarding the University’s black community and police reform, during a Tuesday dialogue with representatives from a student coalition leading calls for NU to divest from law enforcement.

The dialogue, which was held via Zoom, included Sekile Nzinga, the interim chief diversity officer, as a mediator, Julie Payne-Kirchmeier, the vice president for student affairs, Bruce Lewis, the chief of police and senior associate vice president of safety and security, and Todd Adams, associate vice president and dean of students, all representing the University. Interim Provost Kathleen Hagerty was also originally supposed to be on the call.

Graduate student Ana Rosado, one of the student representatives, brought up a June 3 petition signed by over 8,000 people. The petition, among other demands, calls on the University to create a policy that protects student protesters on campus, allocate significant resources and funds to local activists groups that support the black community and “disarm, defund and disband” the Northwestern University Police Department.

“It is offensive for the University to be sending public-facing racial solidarity statements without acknowledging and directly naming anti-blackness at Northwestern,” Harris said. “It is a responsibility of every individual administrator at this University to advocate for black students, and at a minimum, treat us with the respect we deserve.”

The students asked about the actions they could expect the University to take on these issues, but Payne-Kirchmeier said there aren’t many specifics given how recently the quarter ended. She said Hagerty would like to have a second meeting in July to walk through specific actions, and that Lewis has a similar timeline.

When asked about the police budget, administrators also couldn’t give specifics. Lewis said the budget is “very fluid” and is located under safety and security in the NU budget. The budget, Lewis said, is based on the number of personnel, but that it makes up less than a percent of the University budget.

Lewis added that NUPD has been conducting policy reviews with respect to use of force. It has also been examining the relationships it currently has with the Evanston Police Department and the Chicago Police Department. Lewis said he is open to collaborating with students on future actions.

One potential area of revision is the Police Advisory Board, which was established to review and discuss public safety concerns at the University. Adams said the board usually doesn’t meet at a convenient time during which students could attend, though students should be a part of the board. Payne-Kirchmeier suggested even changing the scope of the board to incorporate community safety could allow for more meetings and more actionable change.

“One thing I think would be interesting is to reevaluate the purpose statement of the Police Advisory Board… and really think through what the Police Advisory Board should be doing,” Payne-Kirchmeier said. “If we were to look at a repurposing of the board to not just be about police but about community safety, that could help generate a different kind of dialogue and still have an element of police review.”

The student representatives then asked the leaders what they were doing to educate themselves on anti-racism and abolition. In response, Payne-Kirchmeier and Adams said they have been undergoing training and self-education, and that they understand the benefits they receive from white privilege. Lewis, who is black, said he experienced racism growing up and is committed to ensuring police officers understand implicit bias and the value of empathy. Nzinga said she embraces a restorative justice frame and uses it on campus and with her staff; as a black feminist scholar, she said she teaches with many of the authors whose work centers around these issues.

SESP senior Soteria Reid said black faculty and administrators have had to take on the work of answering the student body’s hard questions, which she said University officials instead should be answering instead.

“How do you interpret your role as an agent of this University who is causing burdens to be placed not just on students, but that is upholding policing?” Reid said. “What are (white) administrators concretely doing to inform themselves about what black students are saying? How are they pushing themselves to not write off black students because of age or because of prestige, experience or knowledge levels, to make sure they are seriously considering the demands?”

Related Stories:
— Students call on University to divest from police forces and invest in Black communities
— Defunding 101: What does it mean to “defund the police” and why is it gaining traction?
— Amid calls to boycott Lightfoot’s commencement speech, a look at the Chicago mayor’s history on policing