Men’s Basketball: Brooks Barnhizer wants to be Northwestern’s point guard of the future 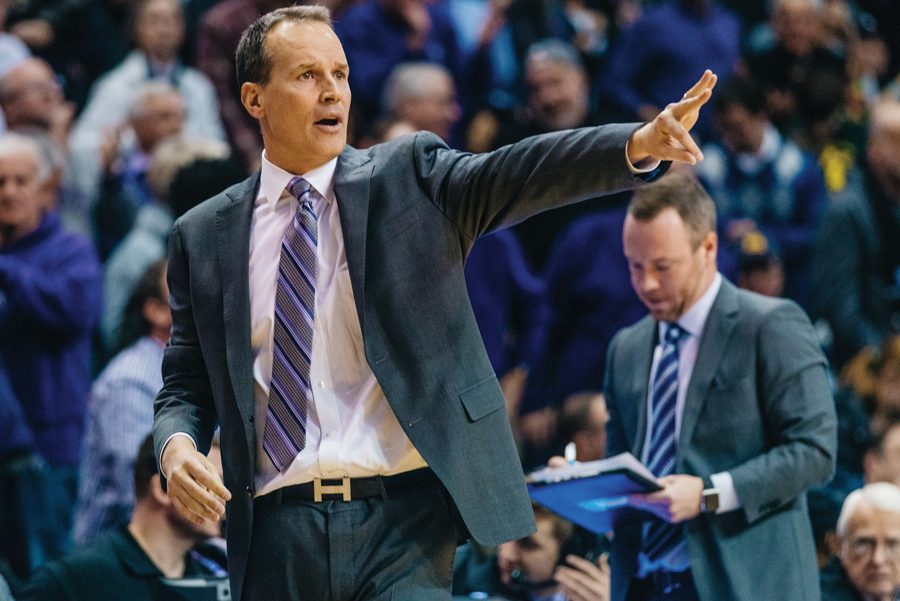 In mid-May, Chris Collins called Brooks Barnhizer out of the blue. It had been almost five months since Northwestern officially offered the 2021 prospect a scholarship and four months since Barnhizer visited campus for a game against Ohio State in January.

After Barnhizer picked up the phone, Collins was direct. Northwestern had been interested in recruiting Barnhizer since the summer of 2019, but Barnhizer felt the Wildcats ramped up their efforts starting with that phone call.

In their conversation, Collins explained why Barnhizer was a “perfect fit” for Northwestern’s system and how he thought Barnhizer could help the Wildcats get back to the NCAA Tournament.

That phone call was just the beginning –– over the next month, Barnhizer kept receiving calls and texts from Northwestern players and coaches.

Sophomores Ryan Young and Robbie Beran told Barnhizer what it was like to play for Collins. Incoming freshman Ty Berry told Barnhizer why he believed in the program. And 2021 commit Julian Roper shared his excitement about the Wildcats’ future.

“It got to the point where I was thinking, ‘What am I waiting for?’” Barnhizer said.

The three-star guard from Indiana made it official June 21, announcing his commitment to Northwestern on Father’s Day. Barnhizer said it was a great weekend, but there were two things he saw that he disagreed with.

One of the things Barnhizer loved most about Northwestern was that Collins agreed with him. Right when he gets to campus, Barnhizer expects the coaches to give him the ball and work with him on running the offense.

Northwestern’s coaches have always seen Barnhizer’s potential to play that role. When Barnhizer took an unofficial campus visit last summer, the coaches compared his game to Bryant McIntosh, who finished his Wildcats’ career with a school-record 700 assists and led Northwestern to the 2017 NCAA Tournament.

The big difference between them, though, is that McIntosh was listed at six-foot-three, and Barnhizer is at least three inches taller.

On Barnhizer’s unofficial visit to Northwestern, the coaches still pulled up clips from McIntosh’s career and told Barnhizer he could play a similar role in the offense.

“They really believe our play styles are similar even though I’m taller than him,” Barnhizer said. “We both have the playmaking ability, the scoring ability. The more they showed me tape of him, the more things I saw that I can take from McIntosh’s game.”

Following Barnhizer’s commitment, Northwestern has a long-term core of players with experience playing on and off the ball. Sophomore guards Boo Buie and Chase Audige have played both roles in their college careers, and Berry and Roper played both point guard and shooting guard alongside high major commits at the high school level.

Even at the forward spots, Northwestern has two players –– Pete Nance and Robbie Beran –– who are aggressive with the ball in their hands.

“Coach Collins loves that versatility, and he always wants to have big ones and twos,” Barnhizer said. “He really sees us being an uptempo team. A lot of movement, playing to our players’ strengths with a fast-paced offense with all the talent they have”

But Barnhizer said he still sees one area of need for the Wildcats’ 2021 roster. Northwestern currently has one remaining open scholarship for the 2021 season –– though another could open up if senior guard Anthony Gaines doesn’t return for a fifth season in 2021 or if another player transfers next year.

“I really think that they’re trying to go for a long-bodied wing with athleticism,” Barnhizer said. “Somebody that can play really good defense, jump out of the gym. They really want a Big Ten athlete with that third spot in my class.”

That’s almost a perfect description of Casey Simmons, a four-star forward from Massachusetts ranked No. 111 in his class by 24/7 Sports. On Monday night, Simmons announced Northwestern was among his top seven schools, and Barnhizer says Simmons’ name has “frequently” come up in his conversation with the Wildcats’ coaches.

Barnhizer texted Simmons on Monday night two hours after Simmons announced Northwestern was on his list, and Barnhizer said he and Roper will be “ringing people’s telephones” trying to encourage them to join Northwestern’s 2021 recruiting class.

In addition to Simmons, Barnhizer says he hopes to get in touch with Patrick Baldwin Jr. and Max Christie, five-star recruits with family ties to Northwestern.

Barnhizer says it’s “not impossible” for Baldwin Jr. or Christie to commit to Northwestern. But regardless of their decisions, he believes Northwestern can be ready to compete when he steps on campus.

“When the 2021 class gets on campus, Northwestern should be in contention to be in the mix in the Big Ten,” Barnhizer said. “You could see that potential even last year since they were in so many games, and I really think as those kids age and as we get on campus, we’re going to be winning games.”