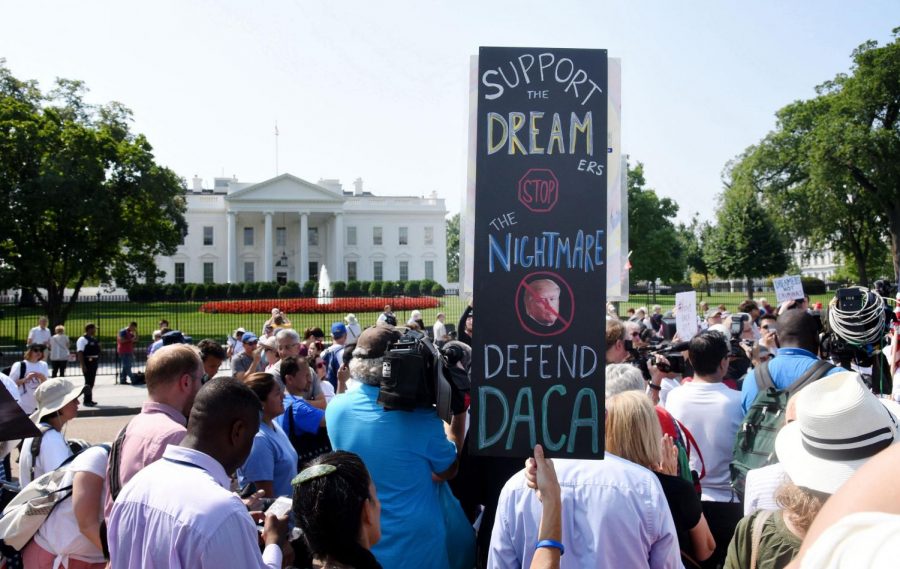 Protesters hold up signs during a rally supporting Deferred Action for Childhood Arrivals, or DACA, outside the White House on Sept. 5, 2017. The Supreme Court blocked the Trump administration’s rescission of the program Thursday.

The U.S. Supreme Court ruled Thursday that the Trump administration cannot immediately proceed with its plan to end the Deferred Action for Childhood Arrivals program, which shields about 700,000 young undocumented immigrants from near-term deportation.

The 5-4 decision ruled that the administration failed to adequately consider the impact of ending DACA, a federal program born out of an Obama-era executive order that — on a case-by-case basis — provides work permits, Social Security and health care benefits to people brought to the U.S. as children without legal residency or citizenship status.

For students like SESP junior Teresa Vergara Miranda, a DACA recipient since age 17, the decision was a relief.

“I honestly thought they wouldn’t rule in favor,” Vergara Miranda said. “My DACA expires in August, and if they had kept the rescission, I probably would not have been able to renew. That would have been horrible, especially in this economy. Of course, there’s still a lot of uncertainty… so it’s a temporary relief, but it’s nice right now.”

The Department of Homeland Security rescinded the executive order establishing DACA in 2017 at the request of then-U.S. Attorney General Jeff Sessions, who argued the creation of the program was an “overreach” of former President Barack Obama’s authority and its provisions were illegal. The Court responded, not by evaluating the stand-alone merits of DACA, but by scrutinizing the process of rescission.

The Court sent the matter back to the DHS for further consideration and returned three associated cases back to lower courts. If the DHS revises their rescission in a manner the Court deems lawful, DACA could still be legally revoked.

The decision, authored by Chief Justice John Roberts, was based around directives laid out in the Administrative Procedure Act. Among other things, the APA calls for paying adequate attention to policy impact in crafting legislation.

Roberts claimed the DHS did not meet APA standards in its rescission of DACA, calling the move “arbitrary and capricious.”

Political science Prof. Jacqueline Stevens said the question of impact could consider both individual DACA recipients and their families as well as the U.S. economy.

“(If) they have this rescission of benefits and all of a sudden, all of the people who are nurses and doctors and engineers working in the United States and helping the U.S. economy are deported, that might have a policy impact,” Stevens said.

Following the decision, the DHS released a statement claiming DACA was “created out of thin air and implemented illegally.” In a separate statement, the U.S. Citizenship and Immigration Services division of the DHS similarly questioned DACA’s legality. Stevens rejected these criticisms as deviating from the rule of law.

When Vergara Miranda heard the news of the ruling, she said it felt “amazing” to know that in addition to being able to renew her DACA status, she may be able to apply for advance parole, allowing her to study abroad or generally travel outside of the country and return lawfully.

She also noted the relief she felt realizing people she knew could apply for the program.

Since the 2017 rescission, a number of those already protected under DACA were able to maintain their protections and continue to renew their work permits for a period of two years — but new applications were ceased completely. While the recent ruling should reopen applications, the executive branch has not yet moved to do so, and President Donald Trump has already threatened to once again cancel the program.

SESP sophomore Pablo Antonio Rodriguez Cuevas is a DACA holder with a path to residency through his mother. Rodriguez said he’s unsure how the rescission of DACA would impact his residency application.

“We would be considered illegal,” Rodriguez said. “Which makes it scary because now (government officials) have our addresses and information… so they could have deported us any minute or time because we wouldn’t have any protection.”

Rodriguez added that through this uncertainty, Northwestern has tried to be helpful, but “they’re doing it incorrectly.” He described being invited to the international student orientation even though he was brought to the U.S. when he was 3 years old, and did not know he was born outside the U.S. until high school.

Vergara Miranda also noted that while the University has expressed its support for undocumented students, the lack of staff devoted and trained to work with them causes the University to fall short when actually providing support.

If the Supreme Court decision holds past the election cycle, Vergara Miranda said it may prompt more undocumented NU students to reveal their status. Those students may need help with applications for DACA or advance parole, while individuals already protected under DACA may need help covering the $495 renewal fee.

As a co-founder and an executive board member of Advancement for the Undocumented Community at NU, Vergara Miranda said she and the group actively work to provide workshops and tools to aid with these provisions. But she said this is work that other universities have done without students having to ask for it, and she will push for NU to do the same.

Reflecting on the Supreme Court’s ruling, Vergara Miranda noted that someone once described DACA to her as “the crumb, and we deserve the whole cake.” She explained that even with Thursday’s decision, DACA is still a program mired in the strangeness and uncertainty of temporary protection — and serves only a portion of the undocumented population, leaving millions more to advocate for.

“Everyone who has sacrificed to be here for a reason deserves to be here,” Vergara Miranda said. “So there’s a lot more people to be fighting for, and a lot more learning to do.”