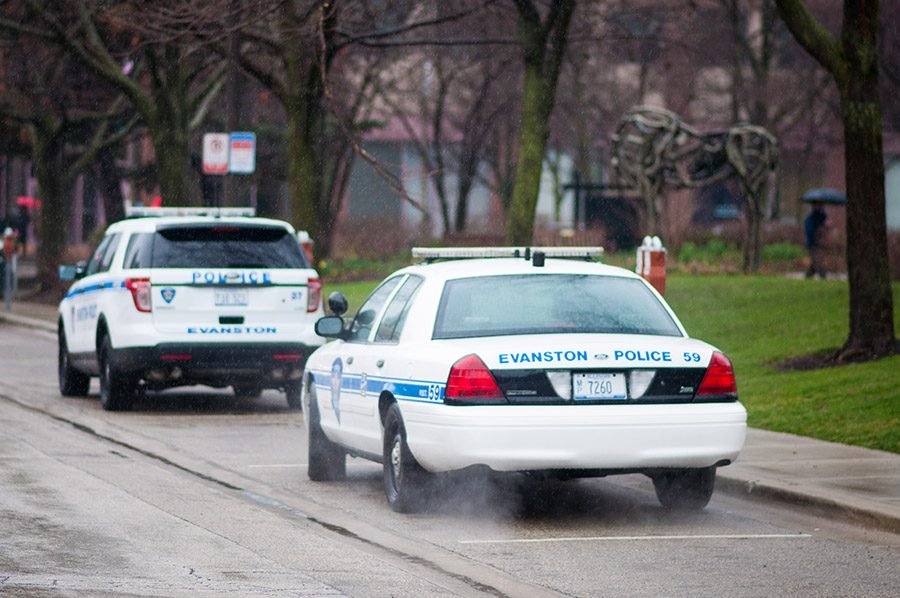 Two parked Evanston police cars. The Defunding 101 event in Evanston prompted discussions to make the city a safer place for black and Indigenous people of color.

As cities continue to see Black Lives Matter protests, Evanston is no exception, with events from peaceful marches to organized conversations about protest demands happening throughout the city.

Even as COVID-19 continues, Evanston residents have continued to protest police brutality and systemic racism in the city through BLM events since late May.

To date, the city has held at least three marches, including the Evanston United Black Men Rally on June 7. Evanston resident Bryant Wallace, who participated in the rally, said he especially appreciated the speakers, who talked about their stories and the steps for progress.

“There’s people that want to talk about change but also implement change,” Wallace said. “That’s what brings optimism for me.”

Wallace said the speakers were not limited to black men, but there were also female speakers. The speakers also came from different age groups.

Wallace said he believes the rally started an honest dialogue because the audience is more likely to relate when there are multiple voices saying the same message. He said change comes from this kind of dialogue.

“It created a very unique spectrum of voices,” Wallace said. “I think sometimes when we look at what’s going on, we only hear one voice, and there’s one message. But I think what’s happening is that we have different voices with the same message.”

On June 11, youth organizers of Evanston Fight for Black Lives organized a Defunding 101 event, where community members discussed ways to make Evanston a safer space for black and Indigenous people of color.

The city clerk’s office hosted a panel on June 16, during which members from Evanston, Northwestern and Chicago virtually discussed issues surrounding race and policing in Evanston.

“You have an understanding that police officers in America and throughout the world are tasked with a job that may be outside of what they really should be doing,” Reid said.

Reid said police officers are dealing with mental health issues and domestic issues, although psychologists or counselors might be better suited for these nonviolent issues.

Evanston resident Sharon Kushiner, along with others, has been holding “Defund the Police” signs in front of the Evanston Police Department for the past three Sundays.

Kushiner believes that this form of demonstration would attract people who not only want to protest and are outraged at police brutality, but also hope to see long-term changes made in Evanston, she said.

“Rather than having a protest that just brought in a whole bunch of people from surrounding communities,” Kushiner said. “We would build it slowly and have it really be Evanston-focused.”

On June 7, Kushiner said only two other people showed up. The following Sunday, the number of participants jumped to around 100. She said she hopes the movement will not slow down and plans on protesting outside EPD every Sunday for the foreseeable future.

“Defunding the police is part of addressing the problems of systemic racism and white supremacy in the United States,” Kushiner said. “So for me, that’s the fight.”