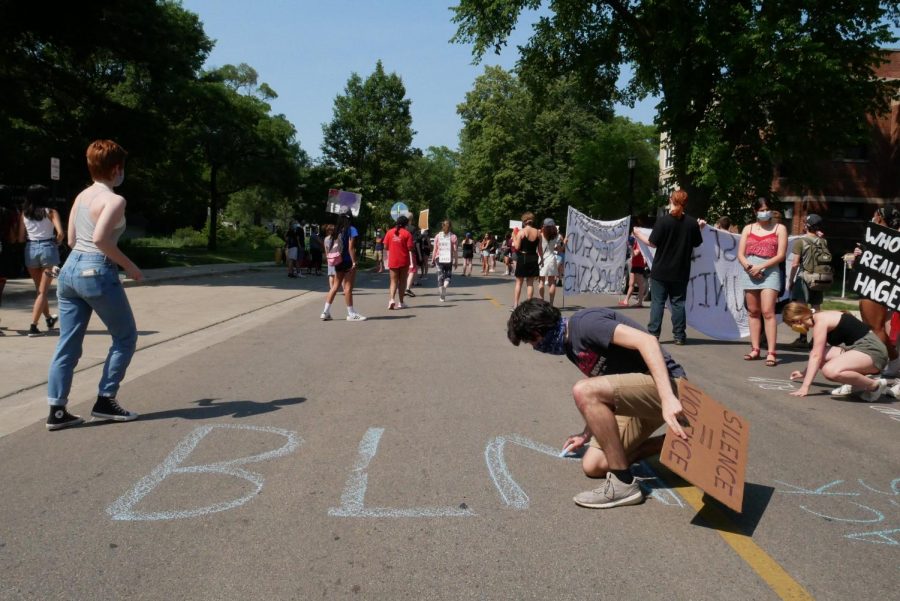 A protestor writes in chalk in front of the Lorraine H. Morton Civic Center. Some 70 protestors gathered Friday to call on Mayor Steve Hagerty to defund the police.

A crowd that began at 3 p.m. as two dozen high school students gathered on the grass in front of the Lorraine H. Morton Civic Center grew to a crowd of roughly 70 by the end of the half-hour protest. Protestors sent emails to Hagerty demanding he defund EPD. The group eventually took control of the stretch of Ridge Avenue in front of the Civic Center’s entrance, where they chanted, waved signs and scrawled slogans in chalk on the street and sidewalk.

“Defunding is a reasonable and achievable government action,” Fleming wrote. “I am ready to fill our community with more services while working toward making Evanston a place where we don’t equate safety with guns and arrests, a city that actually practices radical racial justice.”

Fleming’s statement coincided with Juneteenth, a holiday celebrating the end of slavery in the United States. In Chicago, thousands marched to Daley Plaza to celebrate the holiday and demand justice for police brutality; elsewhere in Evanston, Northwestern students called on University President Morton Schapiro to divest from campus police.

Recent Evanston Township High School graduates, led by Bella Hubbard, coordinated the protest at the Civic Center with the encouragement of the Chicago branch of the Sunrise Movement.

Planning for the event began Thursday, Hubbard said, and the organizers first advertised it Friday morning on Facebook and Instagram.

Evanston Fight for Black Lives promoted the event on its Facebook page, but was not directly involved with coordinating the protest.

“It was really last-minute,” Hubbard said.

She noted the planned location for the protest changed at least once before the group settled on the Civic Center.

Rev. Michael James of Evanston’s Second Baptist Church saw the event at the last minute on Facebook. Dressed down in a white tank top and shorts, he quickly took hold of the crowd upon his arrival, leading chants with the help of a pair of bongos he brought along.

“People need to see this,” James said. “It’s not a black movement. It’s a people’s movement.”

Correction: A previous version of this story conflated Ald. Peter Braithwaite’s (2nd) and Mayor Steve Hagerty’s meetings with Evanston Fight for Black Lives and included details from a press release posted online by the activist group that were not independently verified by The Daily. The Daily regrets these errors.

— Defunding 101: What does it mean to ‘defund the police’ and why is it gaining traction

— The women behind Evanston Fight for Black Lives