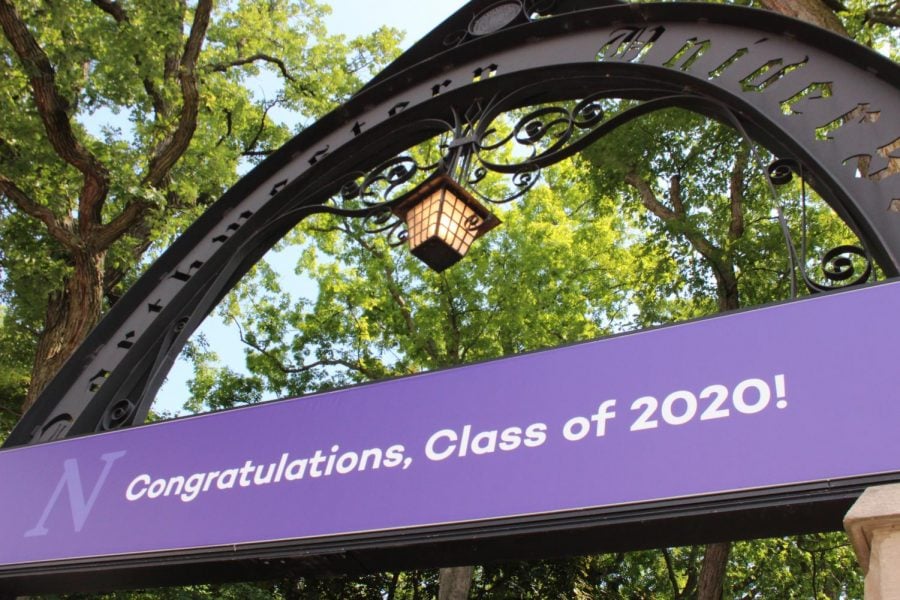 The Arch, decorated for graduation. This year’s graduation speaker was met with student resistance as they cited her response to the recent Black Lives Matter protests.

The virtual commencement was held on the same day as Juneteenth, the annual marker of the end of slavery in the United States when the last enslaved individuals in Texas were told they were free, two-and-half years after the Emancipation Proclamation had been issued.

“(Juneteenth is) a reminder that the hard work of freedom and justice is endless,” said University President Morton Schapiro to graduating students. “The world needs your leadership more than ever, and I have confidence that you will rise to the occasion.”

Lightfoot spoke to graduates against some students’ wishes. Before commencement, a petition, written in solidarity with black students and organizers, asked the University to disinvite Lightfoot from the event.

The petition, also asking the University to divest from police, had garnered over 800 signatures. The petition stated that if Lightfoot spoke, members of the graduating class would boycott commencement, refuse to participate in the #NU2020 advertising campaign and refuse to give a senior class gift or future alumni donations, instead investing into black communities.

Writers of the petition referenced Lightfoot’s controversial responses to the Black Lives Matter protests, including one member of the graduating class recovering from injuries sustained while protesting.

“Having Mayor Lightfoot speak at commencement would be a slap in the face to black students and to members of our class who were brutalized by Chicago police last weekend,” the letter read.

[Read more about what it actually means to defund the police.]

The commencement co-chairs reaffirmed the University’s decision to host Lightfoot in a June 16 email, saying that she represented the principle of making one’s voice heard.

During the ceremony, Lightfoot addressed the recent police killing of George Floyd as well as the continuing COVID-19 pandemic, which she said has shown both strengths and “profound vulnerabilities.”

“In the wake of both of these events, we unfortunately have seen a rise in increasingly divisive rhetoric from all sides, which speaks to pain and anger to be sure,” Lightfoot said. “But, we must not forget the key cornerstones of democracy, which are working toward solutions forged in compromise.”

Lightfoot cited The Washington Post’s catchphrase, “Democracy Dies in Darkness,” and argued that disengagement is also a culprit.

Lightfoot said the COVID-19 crisis has forced the public to rethink engagement, particularly in the realm of public service. As the pandemic demonstrates the expansive impacts we all have on one another, she said everyone has a responsibility to take action. Even though many graduates won’t go into government, Lightfoot urged them to use this moment to energize around public service and its shared responsibility.

“If we are to make our democracy thrive, we all have to do more to engage in our political process,” Lightfoot said. “We are at our core a participatory democracy. And, thus, engagement is our lifeblood.”