Reliving Northwestern’s best sports moments of the past four years 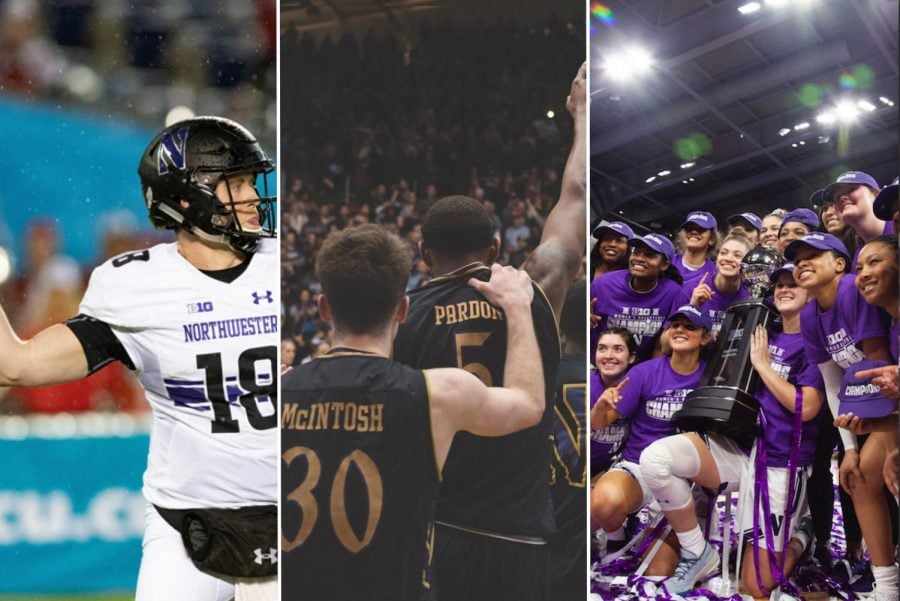 Ups and downs in Northwestern athletics have marked the Class of 2020’s time in Evanston. From the Men’s Basketball march madness in berth in spring 2017 to the head-turning seasons in Lacrosse, Softball and Women’s Golf, students have been through many highs. Football both won the Big Ten West title as students were bussed out to Indianapolis for the championship game — and finished toward the bottom of the conference. Women’s Basketball, while struggling a few years ago, won the Big Ten for first time since 1990 this year.

Relive some of the biggest moments in Northwestern sports through the stories and photos below.

Nathan Taphorn tossed a picture-perfect full-court inbound pass with 1.7 seconds remaining to Dererk Pardon, who laid in a bucket as time expired to give the Wildcats an unforgettable 67-65 win over Michigan — and essentially clinch their first-ever NCAA Tournament appearance.

Students stormed the court of the old Welsh-Ryan Arena, mobbing Taphorn, Pardon, Bryant McIntosh, coach Chris Collins and the rest of the team in a celebration 78 years in the making.

In its NCAA Tournament debut, Northwestern showed it belonged.

The eighth-seeded Wildcats led ninth-seeded Vanderbilt for the vast majority of their first-round matchup, then survived some late dramatics as McIntosh sunk the decisive free throws in the final minute.

In the second round, NU trailed Gonzaga — which went on to finish as national runner-up — by a large margin in the first half, but battled back spiritedly after the break before the infamous missed goaltending call stalled the rally.

Northwestern women’s golf fell just short of the 2017 national title, falling to Arizona State in the championship match, but their dramatic run through the tournament — fittingly held just west of Chicago, in Sugar Grove — felt equivalent to a title.

Led by Kacie Komoto, Hannah Kim and Janet Mao, the Wildcats took first place in the stroke play portion of the NCAA Championship, dispatched Kent State in the quarterfinals and then collectively roared back from a dire situation to stun USC in the semifinals.

University president Morton Schapiro, athletic director Jim Phillips and others cut a purple ribbon to open the new arena in 2018.

“This is a transformational moment for us,” Phillips said.

Almost everything about the arena was new and sleek compared to the pre-construction look. Except for the student section, all the seats in the arena are normal event seats with cushioning. The scoreboard over the middle of the court was new and an additional ribbon scoreboard was added that encircles the building.

Despite losing all three non-conference games in 2018, Northwestern won a remark- able eight of nine Big Ten contests to secure a berth in the conference championship game for the first time since the current format began.

Seniors Clayton Thorson, Flynn Nagel, Montre Hartage helped guide the Wildcats to upset wins over Michigan State, Wisconsin and Iowa en route to clinching the West Division title with three games left to play. A Homecoming comeback for the ages to top Nebraska in overtime, however, likely takes the cake as the most memorable game of the season.

Though NU lost to Ohio State in the Big Ten title game, the Cats capped the season with a surreal comeback victory against Utah in the Holiday Bowl.

After several trying years marked by tragedy and disappointment, veteran NU coach Joe McKeown steered his 2019 group to postseason win after postseason win, culminating in a championship game loss in the Women’s NIT to Arizona.

“They made an incredible run,” McKeown said after the final loss. “I want them to feel like they want another taste of this.”

Northwestern finished the season 47-13, its best record since 2007, and the Wildcats’ 21 Big Ten wins were their most in program history. They had a 20-game winning streak that lasted from late March to early May and won their first 21 games in conference play.

Along the way, NU put itself back in the national softball spotlight and created a palpable buzz on campus.

For the first time since 2014 — one year after the program’s run of seven consecutive national titles ended — Northwestern lacrosse advanced to the Final Four in 2019.

Selena Lasota, named the Big Ten Attacker of the Year, led the Wildcats to a 16-5 record, including long-awaited wins over Maryland in the Big Ten championship game and Syracuse in the Elite Eight.

He earned career sack number 28.5 halfway through the second quarter in forcing intentional grounding, resulting in a safety to earn him the sack and the record.

For the first time in 30 years, NU clinched a share of the conference championship.

As COVID-19 cases and concerns associated with the disease began to rise nationally, the NCAA and the Big Ten announced they would cancel all upcoming games, including those that take place after the academic year concludes. The conference also announced a memorandum on all on- and off-campus recruiting efforts.

Northwestern had 13 sports in season, and those seasons abruptly ended. Women’s basketball was expected to earn a top-four seed and host NCAA Tournament games at Welsh-Ryan Arena next week, and those games no longer occurred.