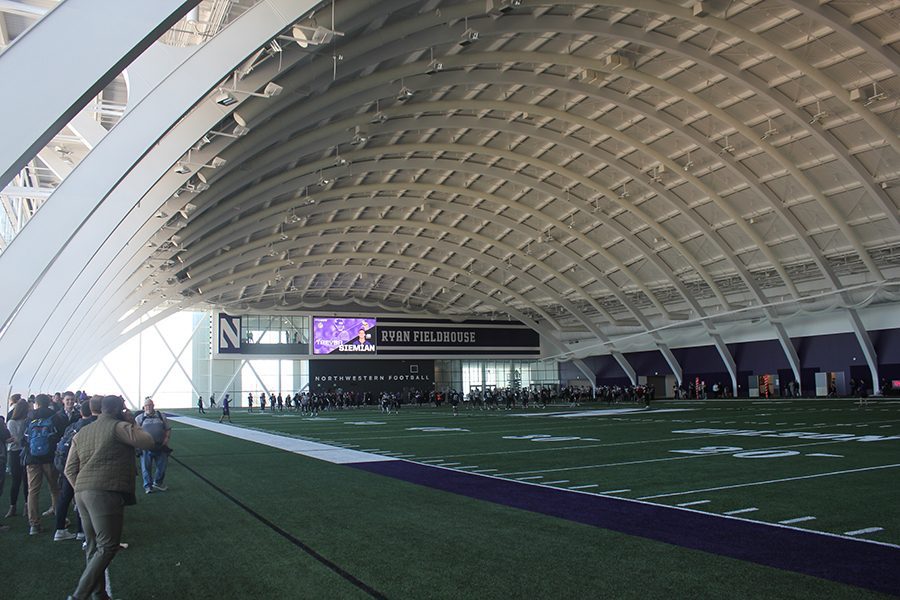 The Northwestern football team practices in Ryan Fieldhouse. The Wildcats will be able to return to Evanston for voluntary workouts starting on June 22.

After a three-month layoff, Northwestern athletes will begin returning to campus later this month, with the first voluntary workouts for football and men’s and women’s basketball scheduled for June 22, the athletic department announced Thursday.

Sports medicine and training staff have already returned to Evanston, along with student-athletes who are recovering from surgery or in rehabilitation.

All student-athletes who return will have a full physical examination, which will include COVID-19 testing, and their health will continue to be assessed daily throughout the summer. Before entering facilities, student-athletes will have their temperatures taken with a no-touch thermometer, and social distancing and protective equipment guidelines will be enforced in all workout settings. Locker rooms and lounges will remain closed.

Last month, football coach Pat Fitzgerald expressed his optimism about the prospect of having a football season this fall, saying if the team is back together by July, they would have a training camp model in place that would allow them to prepare for the season opener, which is still scheduled for September 5 at Michigan State.

While operating remotely, the football program has held frequent Zoom meetings focused on installing a new offensive scheme and readying players to return to campus. It is unknown whether the Wildcats will be able to go to their annual training camp in Kenosha, Wisconsin in August.

Northwestern will join at least eight other Big Ten football teams when the Cats return to Evanston. Players have already been allowed to come back at Illinois, Iowa, Nebraska, Ohio State, Penn State and Wisconsin, and Maryland and Michigan State players are expected to return on June 15.