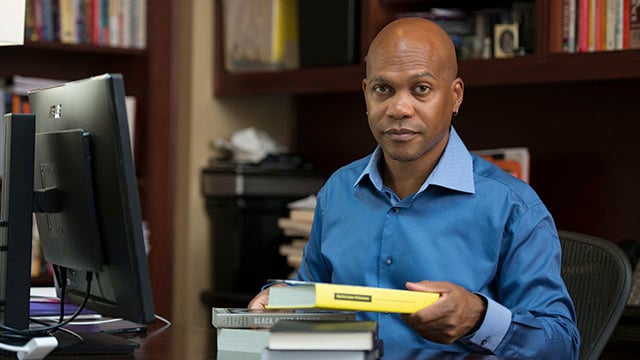 E. Patrick Johnson. He will serve as the seventh School of Communication dean — and the school’s first African American dean.

E. Patrick Johnson has been named the next School of Communication dean, according to a Northwestern News release. Johnson will be the first African American to hold the role when he takes over as dean on Aug. 1.
“I am truly honored and humbled to be selected as the next dean of the School of Communication,” Johnson said in the release. “I stand on the shoulders of my grandmother and my mother, neither of whom ever stepped foot on a university campus except to celebrate my graduations and accomplishments, but from whom I learned how to be a committed scholar, artist and advocate for social justice. As I step into this new role, I carry their tenacity and determination with me.”
Barbara O’Keefe has served in the position since 2000, during which she led the transformation of the school’s curriculum. Johnson, currently the Carlos Montezume Professor of African American Studies and Performance Studies, will lead a school with more than 1,200 undergraduates, 700 graduate students and 170 faculty members, according to the release.
Johnson has broken several barriers in his 20 years at Northwestern. He was the first African American hired and tenured in Northwestern’s Department of Performance studies. He was also the first to have a named professorship in the SoC. In 2012, he was the founding director of the Black Arts Initiative, a cross-school collaboration designed to foster understanding of black arts.
“While I understand the symbolism of my being the first African American appointed to this post — and particularly during a global pandemic and persistence of antiblack racism — my focus as dean will be leading with a moral and ethical imperative to make the School of Communication a place where ‘first’ only refers to our ranking in the world,” Johnson said in the release.
This fall, Johnson will be inducted into the American Academy of Arts and Sciences. He’s been published in the areas of race, class, gender, sexuality and performance and has been a leader in black queer studies. He’s also an artist with Project&, a nonprofit arts organization that seeks social change through art.
In 2010, he was inducted into the City of Chicago LGBTQ Hall of Fame. His book “Black. Queer. Souther. Woman. – An Oral History” was a Stonewall Book Award Honor Book last year.
Interim Provost Kathleen Hagerty said in addition to his outstanding artistry, teaching and scholarly work, he is deeply committed to helping students, staff and faculty excel.
“He will provide visionary leadership, deep expertise and unwavering support as he champions each member of the SoC community,” Hagerty said in the release. “I am eager to begin working with him to address the many opportunities and challenges that lie ahead.”