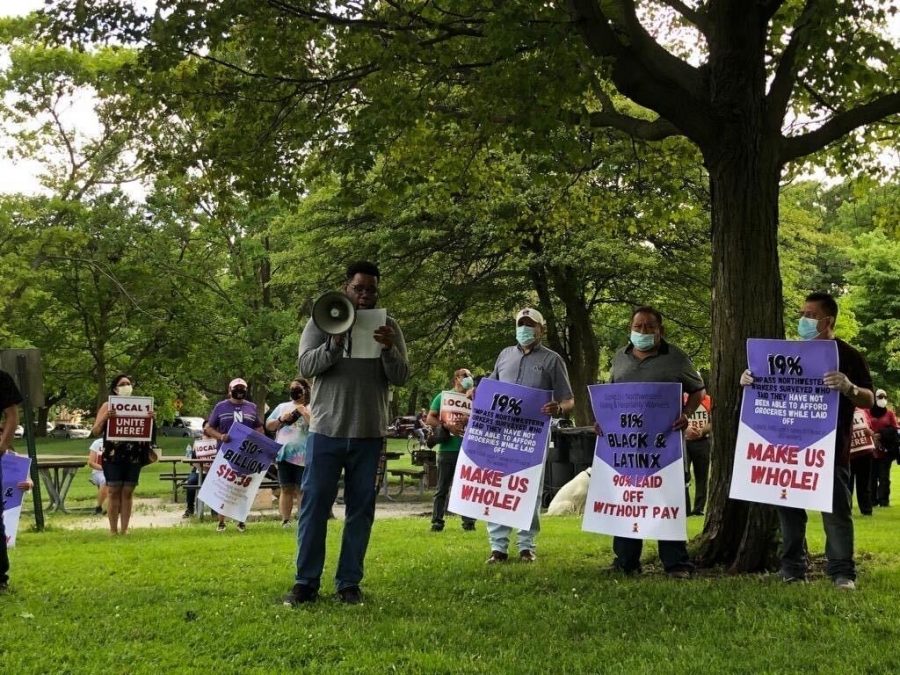 Members of the Northwestern community rallied for service workers laid off without pay since the end of Winter Quarter. Service workers spoke out at Wednesday’s rally about the economic injustice they’ve faced amid the pandemic.

Service workers and their student allies called for laid-off workers to be compensated for wages they lost while the campus has been largely shut down.

In a UNITE HERE Local 1 survey of 106 out of 357 Compass workers, about 20 percent of those laid off said they have not been able to afford groceries.

“I was laid off on March 20,” said Melvin Davis, a delivery driver for Compass. “Because of the low wages at this job, I didn’t have savings built up. After a few weeks of being laid off, I wasn’t even able to afford food. Having to get my food from food pantries was really embarrassing because I had never had to stoop that low before.”

On March 30, the University announced plans to provide regular compensation and benefits to dining workers for Spring Quarter in partnership with Compass. However, UNITE HERE Local 1 says subcontracted workers have still not received any compensation from Compass or NU since being laid off.

“It’s time Northwestern treated us like the integral members of this University we are,” Davis said. “My coworkers and I deserve to be able to feed our families, to work safely and be proud of our work.”

Eighty-one percent of NU dining hall and hospitality workers are black or Latinx, according to a statement by UNITE HERE Local 1. These communities have been the hardest hit by the COVID-19 pandemic, both in the Evanston area and nationwide.

SESP sophomore Viviana Lanuza, a member of Students Organizing for Labor Rights, said NU needs to do right by its service workers. The University has failed particularly in this moment, she said, when black and Latinx workers have been disproportionately impacted by the pandemic and protesters are demanding justice for black lives across the country.

“As a student who cares deeply about Northwestern’s service workers, I stand with them as they call for Compass and the University to take proper action in taking care of their financial needs and wellbeing during this pandemic,” Lanuza said.

[Read more about student efforts to hold the University accountable.]

Noah Carson-Nelson, lead research analyst at UNITE HERE Local 1, told The Daily about 50 workers came to the rally along with a number of undergraduate and graduate students. In light of the national conversation, Nelson said the union is committed to fighting against anti-black violence in addition to the current fight against economic inequality and injustice.

Compass workers still have not heard from their employers at the University about official plans to return for Summer or Fall Quarter, Carson-Nelson said. In the two-and-a-half months since these workers were laid off due to coronavirus concerns, they said the situation has helped highlight the fact that service workers need a living wage.

“A reason this layoff has been so detrimental for folks is that they were already making just over $15 an hour, which is not enough,” Carson-Nelson said. “That’s not a living wage in Chicago or Evanston.”