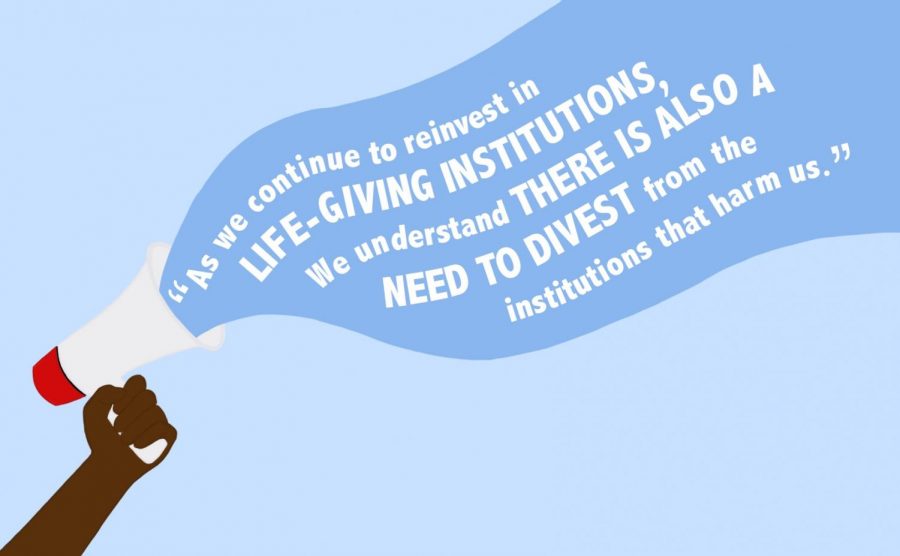 Black undergraduate and graduate students jointly released a June 3 petition calling on the University to sever ties with all affiliated policing and military entities and to redirect the funds to institutions that serve black students’ wellbeing.

These agencies include Evanston Police Department, Chicago Police Department and Northwestern University Police Department — the latter of which the petition said must be defunded and dissolved. That money should be reserved and utilized for “life-giving” services, such as activist groups, mental health counseling, a reparations committee and more.

In addition to the large scale cuts, the document suggested other short-term solutions including optional Spring Quarter finals and the creation of a policy to protect student protesters, such as setting aside grants should they need legal help.

The petition’s authors include For Members Only, Black Graduate Student Association, Coalition NU and Northwestern University Graduate Workers among other groups and student leaders. These groups seek to center black voices in advocating for redirection of funds and resources to mental health, reparations, community building and more.

Many of the petition’s demands are unfulfilled action items originating as far back as the 1968 Bursar’s Office Takeover, while others were more recently advocated for in The Black Student Experience Task Force’s report in 2016. The letter comes alongside nationwide protests against police brutality and racial injustice spurred by the police killing of George Floyd in Minneapolis.

Following Floyd’s death, University of Minnesota’s student body president Jael Kerandi petitioned the university to cut ties with the Minneapolis Police Department. The next day, UMN announced it will limit its ties with the police.

SESP junior and FMO coordinator Mari Gashaw said these incidents of police brutality built upon the “frustration” caused by the COVID-19 pandemic, which has disproportionately affected black and Latino residents in Evanston and across the country.

“Not only are we in a pandemic, but the state that is supposed to protect us is killing us,” they said. “That feeling of not knowing that you are human is the most painful feeling I think anybody can experience.”

Gashaw said students at Northwestern have had NUPD called on them without reason, which demonstrates the lack of consequences for the police’s law mistreatment of black people.

The petition also mentions recent occurrences of law enforcement misconduct and violence against black students and students of color at Northwestern and in Evanston. The petition recounted that in 2015, EPD physically assaulted then-doctoral candidate Lawrence Crosby and charged him with disobeying the police — he was later acquitted.

Doctoral candidate Allena Berry said she signed the June 3 petition because divestment is a concrete first step to further life-affirming practices for Black members of the Northwestern community.

Both Berry and Gashaw said the pandemic has highlighted ways the University has failed black students, even during regular operation.

Berry believes the mobilization from organizations that have been laying the groundwork for anti-law enforcement advocacy will only increase without sufficient University response.

“I don’t see pressure dying down without some actual substantive response from the University that shows that they prioritize black lives, that they understand and are actually listening to what people who make Northwestern possible are demanding of them,” Berry said.

Clarification: A previous version of this story did not include Northwestern University Graduate Workers as authors of the petition.