For LGBTQ students, living at home brings its own set of challenges

Sources with first names only are under pseudonyms to protect students’ safety and privacy.

Weinberg freshman Noah had been planning to come out to his parents for about a year. After hiding his sexual orientation for all of high school, Noah said he found a more open and supportive environment at Northwestern. In the fall, he came out to close friends. In the winter, he started dating. But in the spring — when COVID-19 sent students home for the quarter — Noah’s envisioned timeline began to fade away.

“It’s just not a conversation topic that I want to bring up, especially when I’m still financially dependent and living in their house for the foreseeable future because of the pandemic,” Noah said.

Now, Noah isn’t sure when he’ll tell his parents. Even his conversations feel like a vulnerability; he routinely stuffs a blanket underneath his door when talking to friends.

For many LGBTQ+ students, living at home during Spring Quarter has brought more challenges than boredom, loneliness or Zoom fatigue. Students like Noah, who have come out in college but not at home, are once again hiding their sexual identity. Some face hostile or unsafe home environments. Others are reminded of their high school days — which for a disproportionate number of LGBTQ+ students, means a time of mental health struggles and hiding. 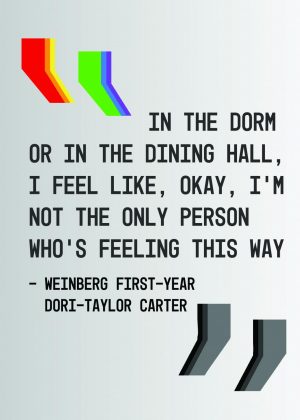 The Trevor Project, a hotline for LGBTQ+ youth, has seen crisis contact volume more than double since the start of the COVID-19 pandemic — an uptick they attribute to the “loss of the social connections that protect LGBTQ+ youth from suicidality” and confinement to unsupportive homes, among other factors. Just one-third of LGBTQ+ youth experience parental acceptance.

College can provide relief. Although stigma and discrimination in higher education are far from nonexistent, most LGBTQ+ students report better feelings of belonging, safety and inclusion in college than they did in high school. The contrast can be attributed to newfound independence and ease of connection to the LGBTQ+ community: access to affinity groups, gender and sexuality classes and resource centers often have positive impacts on LGBTQ+ students’ mental health.

Yet in the midst of the pandemic, those connections are strained. Along with other student organizations, LGBTQ+ affinity and support groups now operate virtually. The lack of a physical community has been especially challenging for LGBTQ+ students, Weinberg first-year and external president of Rainbow Alliance Dori-Taylor Carter said.

“In the dorm or in the dining hall, I feel like, okay, I’m not the only person who’s feeling this way,” Carter said. “And I think that you can feel that way virtually, but it’s hard when you’re within a small space with roommates or family members that don’t necessarily reflect you and your identities in the same way.”

Weinberg sophomore Eli Gordon said Northwestern was the first place he could express himself authentically after coming out as queer his senior year. He went to a small, religious high school in a suburb outside Philadelphia that he described as “progressive in quotation marks.”

When Gordon went home for the quarter, he dreaded reverting to his old self.

“It makes me feel like I’m going back to that high school headspace, where I was trying to conform,” Gordon said. “I think if I were to be in spaces with the kids from my high school again, it will feel really weird to act with them the way I want to act — which is the way I act in college.”

Medill first-year James, who came out as gay his senior year of high school, said he’s been lucky to have a largely supportive environment at home. Still, his parents will sometimes jokingly ask him to “try out” dating girls — microaggressions he didn’t have to deal with on campus. 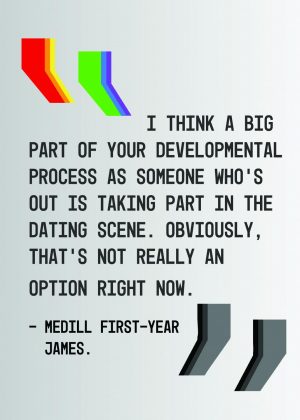 James said he also feels like he’s missing out on an important step in his process of coming out: dating.

“I think a big part of your developmental process as someone who’s out is taking part in the dating scene,” James said. “Obviously, that’s not really an option right now.”

Hannah, a member of [email protected], said although more graduate students can choose not to return home during the pandemic than undergraduates, many face similar obstacles. Hannah decided to return home to spend time with her family and enjoy the larger physical space — even though her parents are “not one hundred percent comfortable” with her sexual orientation. They used to ask Hannah if she had “met any nice boys at college,” a question she said made her feel like a “fraud.”

“It’s a really horrible feeling to have to go back into the closet,” Hannah said. “I’ve done it before, and I can see why that would be such a struggle for undergrads, especially in the context of losing your broader support network at the same time.”

Noah said his time at home has been made easier by coming out to close friends from high school. But the situation remains far from ideal, and he said the best he can hope for is that on-campus classes resume Fall Quarter.

“I’m scared about not going back,” Noah said. “I just really want to be back on campus.”