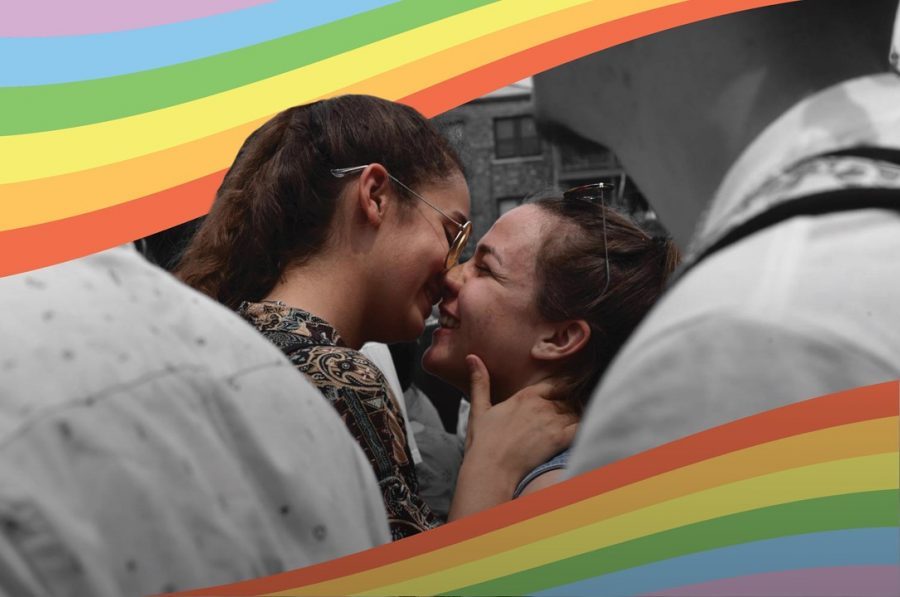 Evanston Pride, Inc. board members spoke with Evanston residents on Tuesday to learn more about how residents hope the organization can support LGBTQ+ residents through programming and events. (Photo by Emma Ruck)

This Saturday, Evanston would have seen musicians, crowds and unicorn-themed floats rolling down the streets for the city’s first Pride Parade. But due to coronavirus concerns, the inaugural celebration has been postponed to next June.

The idea for the parade arose last year, when Jackson Adams — the principal creative at Life: Styled By Jackson in Evanston — realized the city hadn’t been doing anything to celebrate pride.

So, Adams helped organize Color the Mile with Pride & Pride Night Out Sip & Shop, an event last June that invited kids to chalk the sidewalks with rainbows and adults to stop by various shops on the mile for snacks and drinks.

“From there, everybody was like, ‘Next year we’re doing a parade,’” he said. “You see the neighboring communities around us popping up with events, and I was like, ‘Well, Evanston’s a hip town and there’s people from all walks of life.’”

After that, Adams and a committee of Evanston business owners and residents began planning. They spoke with organizers from Evanston’s Fourth of July Parade, Chicago’s Pride Parade and even the Macy’s Thanksgiving Day Parade for advice. They created a budget to account for expenses like street closings and portable toilets. And they began raising money.

Several organizations were ready to become sponsors, and many businesses and individuals supported the parade on a Kickstarter campaign. The committee had also organized a collection of fundraisers, ranging from a karaoke party to a pride brunch to a pageant.

But in April, the pandemic forced the committee to put everything on hold.

“(We postponed) just for everyone’s safety and also for a peace of mind, at least I know for me,” Adams said. “How do we continue to ask for donations? People are now starting to get furloughed and lose their jobs.”

Weinberg sophomore Lauren Collins, who normally attends the Chicago Pride Parade, said they were looking forward to attending the Evanston event this year.

“Obviously Evanston is very liberal and largely open to LGBT people,” Collins said. “But I think having a public display like that would reaffirm it to people who aren’t necessarily in the LGBT community themselves that Evanston’s a place that supports a culture of acceptance.”

Aim Larrabee, a co-owner of Aim & Ailie Hair Boutique and a member of the committee, said she and her wife were disappointed about the parade getting postponed.

They have an 18-month-old daughter and were excited for her to see a pride celebration from a young age, Larrabee said.

“I didn’t grow up in a place where I could be openly gay at all — in fact it was a very dangerous place to be gay,” she said. “So the idea of my daughter just growing up with…the pride parade in the town that she lives was unimaginable to me as a kid, and I was so excited for it.”

Julia Wallace, a Medill sophomore, added that she had already been planning to go to the Evanston Pride Parade with some of her friends. 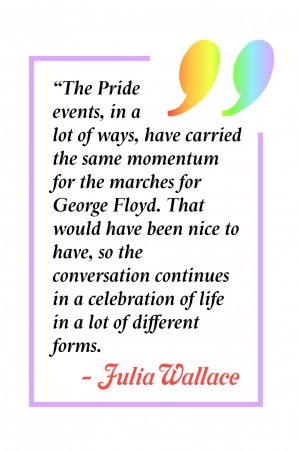 Wallace also attended the Evanston protest against police brutality and said she imagined the Pride Parade might have been a way to continue that discussion.

“The Pride events, in a lot of ways, have carried the same momentum for the marches for George Floyd,” Wallace said. “That would have been nice to have, so the conversation continues in a celebration of life in a lot of different forms.”

While the parade won’t happen this year, the committee is looking to 2021 and beyond. Adams and his team want the parade to become its own 501(c)(3) charitable nonprofit, so it can fund itself for years to come.

Executive director of The Main-Dempster Mile Katherine Gotsick said the idea came about because the committee had been looking for a charity partner for the parade but couldn’t find one.

“It was really tough to find an Evanston-based LGBTQ nonprofit,” she said. “So we’re going to start one.” 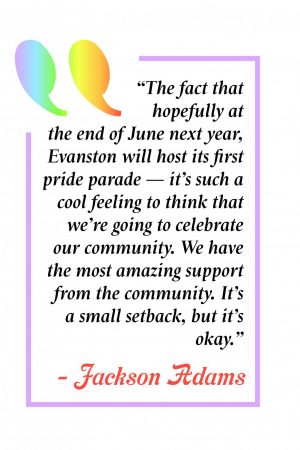 Right now, the committee is working on creating a list of what is necessary to apply, such as drafting bylaws and recruiting board members.

While he’ll miss the excitement that this year’s parade would have brought, Adams said he’s even more excited for the celebration in 2021.

“The fact that hopefully at the end of June next year, Evanston will host its first pride parade — it’s such a cool feeling to think that we’re going to celebrate our community,” Adams said. “We have the most amazing support from the community. It’s a small setback, but it’s okay.”