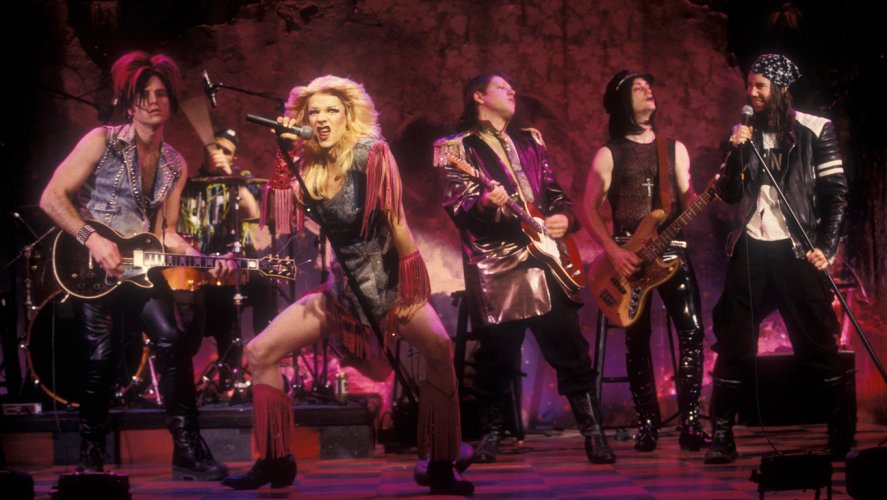 John Cameron Mitchell in “Hedwig and the Angry Inch.” The director and actor wrote iconic queer musical based off of his childhood.

The Origin of Love: John Cameron Mitchell on “Hedwig,” “Shortbus,” and queer radicalism

When John Cameron Mitchell attended Northwestern in the early ’80s, the theater department consisted mostly of closeted gay men –– himself included. It was a strange environment, as although he developed a provocative artistic sensibility under the tutelage of performance studies professors like Frank Galati and Paul Edwards, he said the school itself was quite conservative.

Then, in the middle of his tenure at the school, the AIDS crisis hit its peak. It was a frightening moment for queer people, but for Mitchell, it was also activating: Suddenly, being in the closet felt selfish when people were dying.

Mitchell came out his senior year, after growing in confidence when he starred in a Goodman Theatre production of “The Adventures of Huckleberry Finn.” And after coming out, he remained strident in his queerness, refusing to ever closet himself or participate in something he thought went against his values.

“I would show up to auditions in my ACT UP pin, and sometimes challenge the people I was auditioning for, especially if something was written very homophobically or racistly,” Mitchell said. “I would walk away assuming I just wasn’t going to get the job, but I didn’t want to be a part of something I felt was lazy, immoral, sexist, homophobic. Sometimes, saying no is empowering if it’s for the right reason.”

Now 57, Mitchell has built his career off of challenging norms and embracing provocative themes of sexual freedom. His most famous work is the cult classic ’90s musical, “Hedwig and the Angry Inch,” about a genderqueer rock singer and her struggles with her identity. Mitchell wrote and starred in the original Off-Broadway production, and then directed the equally famous film adaptation in 2001. In addition to Hedwig, he’s also well known for his provocative 2005 indie film “Shortbus,” as well as roles in TV shows like “Girls.” 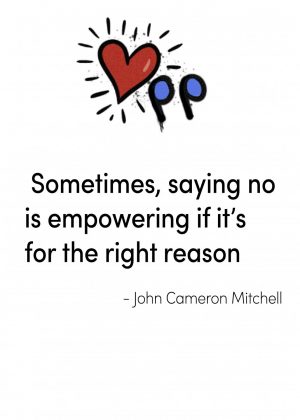 Born in El Paso, Texas, Mitchell was a quintessential military brat, moving constantly as his army major general father transferred from assignment to assignment. Many elements from “Hedwig” stem from his childhood: The character of Tommy, a Catholic teenage son of an army general, is a stand-in for him, and Hedwig was inspired by a German prostitute who babysat his brothers for a time.

Growing up, Mitchell attended several “cheap-ass” Catholic schools with no arts budget, and as such didn’t have much access to theater, although his mother was a fan of the arts and encouraged his interest in it. When he campaigned in high school to start a theater program, he had to get a mom to direct the first show the school did, a Noël Coward

He applied to Northwestern as a theater major because he didn’t have to audition, with the expectation that he would study acting and then fall back on a new career option when he left the school. Northwestern prepared him well as an artist, however, laying a foundation of artistic integrity and a desire for innovation that he credits as helping him when he developed “Hedwig.”

After his role in “The Adventures of Huckleberry Finn” in 1985, Mitchell left for New York without graduating from NU to work as an understudy for Huck Finn in a Broadway musical version of the same story, “Big River.” After “Big River,” he spent several years splitting his time between acting in high profile theater and taking roles in film and TV to help pay the bills, such as guest spots on shows like “MacGyver” and “Law & Order,” as well as a lucrative job voicing the kangaroo in commercials for Dunkaroos snacks.

His first big theater roles were supporting performances in the 1990 play “Six Degrees of Separation” and the 1991 musical “The Secret Garden.” He was offered a role in the original production of “Rent” as Puerto Rican drag queen Angel, turning it down because he was “the furthest thing from Puerto Rican.”

In 1992, he won an Obie Award for his performance in “The Destiny of Me,” a follow-up to Larry Kramer’s AIDS crisis drama “The Normal Heart.” He sat for a profile with the New York Times that year, in which he publicly discussed his homosexuality for the first time.

“(The profile) didn’t make a big deal out of it, which I liked,” Mitchell said. “It was just part of the package of a person.”

Mitchell’s first inspiration for creating “Hedwig” stems from a theatrical adaptation of Greek philosopher Plato’s “Symposium,” which contains a speech where playwright Aristophanes explains the origins of love and human sexuality. That speech inspired the centerpiece song of the show “The Origin of Love,” and the themes of gender and identity that ground the story.

Mitchell developed “Hedwig” with composer Stephen Trask, who wrote the music. They developed a punk rock style for the music, to capture an anarchic style that fit the story. The story was written as Mitchell and Trask’s band performed songs for the show in queer nightclubs and developed the character and the one-man show style of the production. 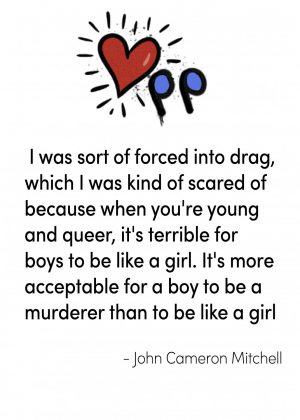 Originally, the main character of “Hedwig” was intended to be Tommy, Hedwig’s love interest who abandons and betrays her. However, Trask persuaded Mitchell to center it on the character of the German prostitute, as they wanted to do a performance in a queer nightclub Squeezebox. To do so, Mitchell would have to perform in drag, something he had never done before.

“I was sort of forced into drag, which I was kind of scared of because when you’re young and queer, it’s terrible for boys to be like a girl,” Mitchell said. “It’s more acceptable for a boy to be a murderer than to be like a girl. I grew up with that, and in a way I was sort of cured of it with Hedwig.”

The show premiered as a full-fledged musical in 1998 at the Jane Street Theatre, and ran for two years. Although the show wasn’t much of a commercial success it developed a decent cult following, and a director Mitchell had previously worked for, Robert Shaye, saw it and offered to fully finance a film version.

The film adaptation of “Hedwig” was released in 2001, and Mitchell was nominated for a Golden Globe for his performance. The film was a box office bomb at the time, but over time people discovered it through DVD and it developed a strong following that spans several countries, from Spain to Korea. That following led to the show finally making its way to Broadway in 2014 in a critically-acclaimed revival that won four Tony Awards. In the middle of that run, Mitchell returned to the Hedwig role in a limited stint, after he had gone several years without performing. Although he said it was a nerve-racking experience, and the choreography was meant for a much younger man, he said it was one of the most fun moments in his career, and getting the story on Broadway was gratifying to see.

“Broadway wasn’t really ready for us back in the ’90s,” Mitchell said. “It was just too conservative. It’s like we do our thing, they do theirs, sometimes we meet in the middle. And Broadway finally was ready for us.”

Mitchell’s hair and makeup stylist during the original production of “Hedwig” was Mike Potter, who also worked on the movie and the Broadway revival. Potter said the process of developing the show felt very ramshackle, and at the time he had no idea how big the project would become. He attributes the endurance of the show to the core themes of self-acceptance and struggling with your identity.

“I think there’s a lot people see in themselves, in her,” Potter said. “She has a beautiful message of self-acceptance, and she’s such a great figure to deliver that message.”

After the success of “Hedwig,” Mitchell’s next big project came in 2006 when he directed “Shortbus.” Mitchell wanted to explore sex and the role it plays in people’s lives, and thus set out to create a film where all sex scenes were non-simulated and real. Taking inspiration from his experiences in New York City countercultural sexual and artistic gatherings, Mitchell came up with a story about a group of diverse New Yorkers who attend a weekly sex salon Shortbus, acting as a vehicle to portray the nuances and complexities of sex in a way that counteracts the unreality of other portrayals of sex.

The main character of “Shortbus,” couples counselor Sofia, is played by Sook-Yin Lee, who had a small role in “Hedwig” as a guitarist in a Korean women rock band. The two became close friends after filming for the first movie wrapped, and to this day Lee refers to him as their “faraway friend who’s my family.”

Lee said during filming of “Shortbus,” all of the actors felt comfortable and safe during the non-simulated sex scenes, due to the enviornment that Mitchell created. According to them, Mitchell ran filming as something of an art camp, where the actors would spend weeks together bonding in order to develop trust. The film started with no script, and the characters and storylines developed based on the connections that formed through rehearsals.

“He’s someone who’s really good at rallying people,” Lee said. “That feeling of comradery was really key to the process from the beginning. To explore sex, real sex, it takes a lot of nerve and a lot of trust.”

Currently, in addition to his role in the Hulu original series “Shrill,” Mitchell has ventured into podcasting, and is releasing a new musical called “Anthem: Homunculus,” a semi-autobiographical podcast series featuring the voices of famous Broadway talents like Patti LuPone and Cynthia Erivo. In 2019, he started an Origin of Love tour, a series of shows in which he performs music from Hedwig and shares stories about it’s development, although dates have been postponed due to the pandemic. He is also currently working on an adaptation of a novel for TV, and although he declined to say what it was, he did mention the writer went to Northwestern.

Mitchell said over the course of his career, most of his projects started unsuccessful; “Hedwig” and “Shortbus” both flopped, and “Anthem” so far has gone under the radar. Although he said this can be frustrating, and often causes him to take other jobs to finance his passion projects, he also said he’s unwilling to sacrifice his artistic vision, and people always rediscover and appreciate his work later on.

“It makes it all more meaningful in the long run,” Mitchell said, “that my work’s not disposable.”