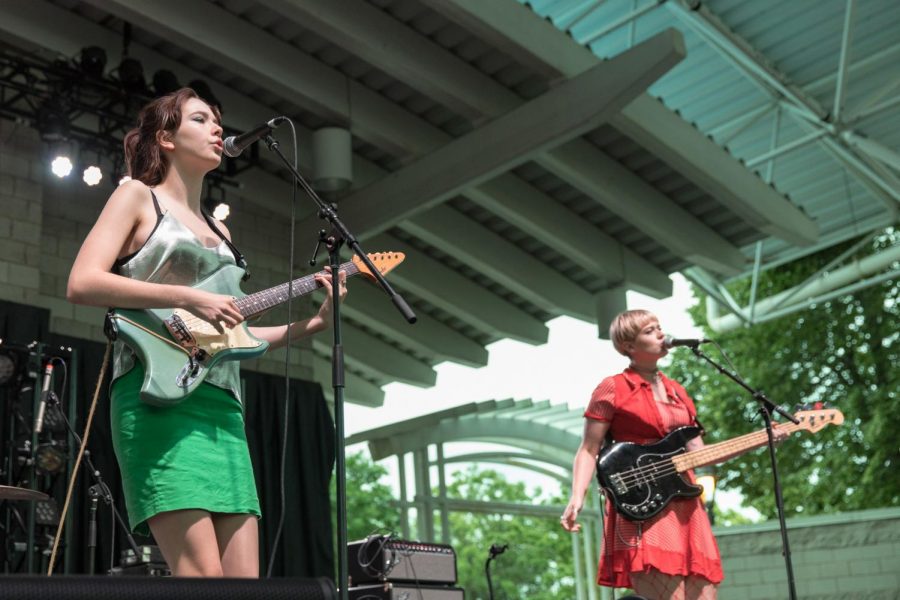 The Regrettes. The band played a 30-minute set at this year’s Dillo Day.

Playing for Digital Dillo 2020 gave Los Angeles punk and riot grrrl band The Regrettes an excuse to meet up for the first time “in a very long time,” frontwoman Lydia Night said during their set. Their performance included hits like “Seashore” and “What Am I Gonna Do Today,” a quarantine anthem released just this month.

The band delivered a 30-minute-long performance, followed by a Q&A session, as part of this year’s Digital Dillo. In late April, Mayfest Productions announced that Dillo Day would move online in accordance with the University’s decision to hold Spring Quarter remotely.

The Regrettes cracked jokes about eating cereal and the absurdity of not playing in front of an audience while delivering an energetic rendition of “California Friends,” the second track on the band’s third album, “How Do You Love?” a dreamy West Coast jam.

During the Q&A, band members said they expected to live together for most of the year, and it was uncomfortable to be apart while writing and making music over video calls.

“We hate each other now,” Night jokingly answered, when questioned about the changing dynamic of music production during the pandemic.

The band’s performance came as thousands across the country march for the fifth-straight day against police brutality and racist systems of policing, spurred by the killing of George Floyd by Minnesota police officer Derek Chauvin, who choked the Houston-native and father despite his pleas of “I can’t breathe.”

Night said the band cares and feels for “what is going on in the world right now,” emphasizing that it’s been “too many years” that people have not educated themselves about privilege and discrimination, especially as a band composed of white musicians.

“We encourage everyone watching this, to take action, to listen to educate yourself because we literally have to.” Night said during the Q&A, “Every single person needs to do anything they can right now.”

The band most recently released “What am I Gonna Do Today,” performed for the first time during the Dillo Day set.

Going into an interview with a Mayfest Productions organizer, band members also spoke about empowering womxn, transgender and nonbinary concertgoers through an all-women mosh pit — a staple at concerts.

With the band currently composed of mostly women, Night said she noticed many male-majority mosh pits were more aggressive. She said she saw an all-female mosh pit form organically during the band’s concerts, and the band began to encourage creating a safe space.

“The more we empower our audience, the more they empower us and in turn we empower them and I think it’s for all of us,” Gariano said. “It’s a give and take — it’s really cool.”

Safety for womxn, Gariano said, is a big part of the band. Dickson added that the band members seek to be musical role models to empower budding female-identifying musicians.

Due to technical issues, the question-and-answer had to be cut short.

“(It’s) weird that it went by in two minutes,” Night said at the end of the session. “Thank you so much again for watching. Thank you Northwestern University for having us, technically I guess, on your computers.”