Sastoque: Why you should learn a new language 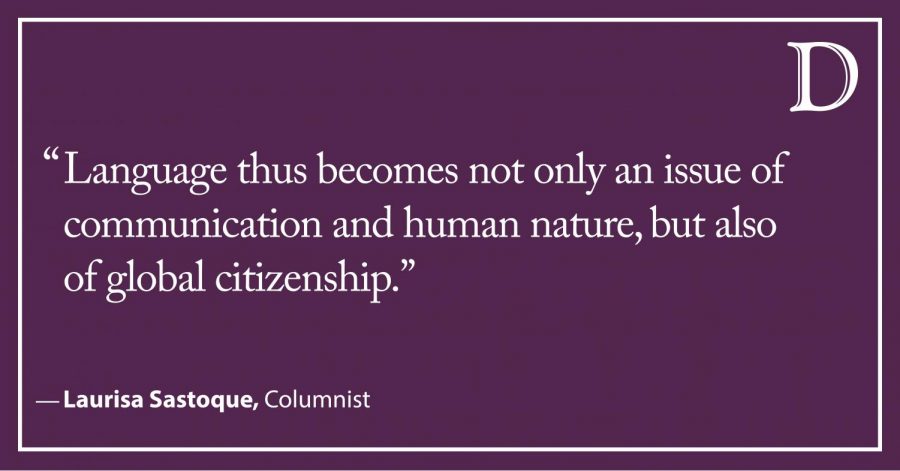 English speakers who refuse to learn a second language because of how universal English has become are robbing themselves of an opportunity for development. While most airports have translations of every sign into English, and locals in a foreign country usually address tourists in English, to actively resist learning another language is a self-centered and shortsighted conception of language.

In fact, there is much more to language than finding your way through customs or figuring out where the nearest souvenir store is. Popular motivations for learning a language usually relate to tourism, career advancement, the business world and academia. All of those are completely valid reasons, but a language’s worth goes well beyond the labor market.

For starters, learning a new language can help you understand your own language better. In any language, there are certain conventions of sound, syntax and meaning that are inherent to their respective communication. In English there are about 44 unique sounds or phonemes, and most native speakers of its mainstream varieties know how and when to make these sounds, naturally.

Because these aspects of sound are natural for the native speaker, they don’t have to think about the position of their tongue or the subtle differences in nasalization that constitute different sounds. When learning a new language, however, English speakers are introduced to a whole new set of sounds that no longer come naturally to them.

For instance, French has over 36 phonemes, largely distinct from those found in English. By delving into French pronunciation, not only do English speakers learn about the expanse of the human phonetic apparatus in creating all sorts of different sounds, but they also come to understand how sound works for their own language. As speakers begin to expand this dictionary of sounds by learning new languages, it becomes easier and easier to pronounce words in even more languages.

Language is also a strong tool to convey thoughts. Polyglots often get asked what language they think in. The answer is: all of them. This is because a language, just like sound, comes with a specified format of conveying one’s thoughts and ideas. English is a subject-verb-object language, meaning that a sentence that would sound natural for an English speaker is “I like apples.” For a Japanese speaker, who uses a subject-object-verb syntax, the sentence might go as “I apples like” instead.

These variations allow language learners to evaluate the role of words within the sentences of their languages. In time, these formats of thought begin to expand the possibilities of their thought.

This expansion of the mind can also be found in vocabulary. Language learners tend to think about learning words in a different language as a process of finding a translation for every word in their native language. The truth is that learning a new language goes well beyond translation, not only learning to think in a new “dictionary,” but also finding words that express ideas you weren’t familiar with, or that are specific to a culture.

Furthermore, the benefits of learning a language go beyond understanding yourself. Language also gives you a look into the perspective of a different culture. Nelson Mandela reportedly once said, “If you talk to a man in a language he understands, that goes to his head. If you talk to him in his language, that goes to his heart.” Getting to talk to a person of a different culture in their own language helps you comprehend their experience and put yourself in their shoes in a way that wouldn’t otherwise be possible.

Language thus becomes not only an issue of communication and human nature, but also of global citizenship. It constitutes an indispensable tool to perceive a wider world than the one a single language confines us to, and a means to appreciate diversity.

Laurisa Sastoque is a Weinberg freshman. She can be contacted at [email protected] If you would like to respond publicly to this op-ed, send a Letter to the Editor to [email protected] The views expressed in this piece do not necessarily reflect the views of all staff members of The Daily Northwestern.