The Daily Northwestern • May 29, 2020 • https://dailynorthwestern.com/2020/05/29/opinion/blaine-access-to-mental-healthcare-should-be-a-right-for-everyone-not-a-privilege-for-a-few/

Blaine: Access to mental healthcare should be a right for everyone, not a privilege for a few 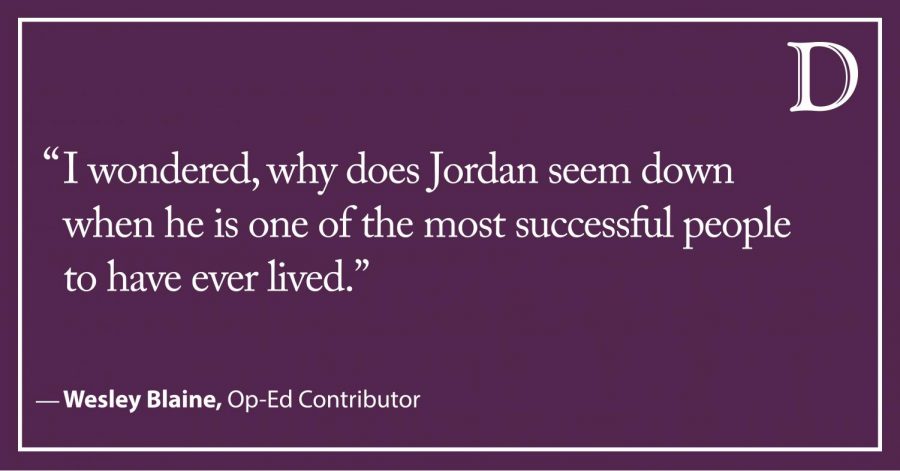 I was watching ESPN’s new documentary about the Chicago Bulls, “The Last Dance,” when a scene with Michael Jordan piqued my curiosity.

Jordan sits in a cream-colored chair talking with a reporter about his accomplishments while sipping a half-filled glass of scotch. He seems sullen.

I wondered, why does Jordan seem down when he is one of the most successful people to have ever lived? And why would he drink during an interview that millions would watch?

We see an answer in the eighth episode, right after The Bulls had beaten the Seattle SuperSonics to win the 1996 NBA championship. The camera pans to the inside of the Bulls’s locker room. Bubbly champagne is spraying everywhere. But Jordan is lying face down on the floor, cradling a basketball while sobbing uncontrollably.

Jordan was not crying tears of joy. He was crying tears of sadness because it was Father’s Day, and this was Jordan’s first championship win without his father, who had been tragically murdered in 1993. But what this scene does not reveal is a dark secret about Jordan’s relationship with his father.

Jordan’s father, James, was a mechanic. Jordan’s brothers were mechanical too, and would help their father repair their cars. But Jordan was not mechanically minded.

“(My father) would tell (my brothers) to hand him a nine-sixteenths wrench and they’d do it,”
Michael said in a biography. “I’d get out there and he’d say give me a nine-sixteenths wrench and I didn’t know what the hell he was talking about. He used to get irritated with me and say, ‘You don’t know what the hell you’re doing. Go in there with the women.’”

This may sound like an innocent slight, but Jordan used it to become the greatest basketball player that ever lived.

“Years later,” Delores, Michael’s sister said in the same biography, “during the early days of (Michael’s) NBA career, he confessed that it was my father’s early treatment of him and Daddy’s declaration of his worthlessness that became the driving force that motivated him … Each accomplishment that he achieved was his battle cry for defeating my father’s negative opinions of him.”

I do not know if Michael Jordan has seen a therapist to resolve his issues with his father. What I do know is that many Americans do not see a therapist because they cannot afford one.

Children with unresolved mental health challenges can become adults with substance use disorders, employment issues and other major life problems.

This raises one of the most important problems I believe that the United States is facing: the inequality in access to mental healthcare.

To get regular mental healthcare in the United States, you either need money, good health insurance, or both. This means that too many people suffer because they lack financial resources.

My wife is Canadian and is baffled by this problem. When her father passed away unexpectedly in 2011, we flew to Montreal for his funeral. After the funeral, my wife extended her stay in Montreal so she could meet regularly with a counselor.

My wife did not haggle with her insurance company about whether they would pay for her therapy. She did not worry about how many sessions were approved, fuss with a co-pay or pay out of pocket for her care either. She made an appointment and got the support that she needed because Canada has socialized health care.

I am not advocating for socialized health care because I realize that it has plenty of flaws. What I do believe we need is taxpayer-funded mental health care so that everyone in the United States can see a therapist regardless of their financial resources.

This is also based on my experience as a crisis intervention counselor at a call center that is funded by taxpayer dollars.

I am trained to prevent callers from hurting themselves. I am not a trained therapist. In the 2.5 years that I have worked at this call center, I have noticed that many of the callers I speak with do not have suicidal ideation; they want someone to listen to their problems because they can’t afford a therapist.

May is Mental Health Awareness Month. Now is the time to tell our politicians to pass federal legislation that makes mental healthcare a right for everyone, not a privilege for a few.

Wesley Blaine is a graduate student at Northwestern. He can be contacted at [email protected] If you would like to respond publicly to this column, send a Letter to the Editor to [email protected] The views expressed in this piece do not necessarily reflect the views of all staff members of The Daily Northwestern.