The Daily Northwestern • May 28, 2020 • https://dailynorthwestern.com/2020/05/28/sports/football-inside-peyton-ramseys-300-mile-drive-to-test-out-northwesterns-offense/ 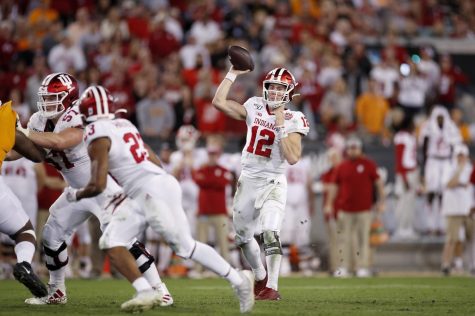 It’s about a five-hour drive from Cincinnati to Evanston.

Leaving Cincinnati, follow Cross County Highway going west, then merge onto Interstate 74. Veer around Indianapolis –– just missing city traffic –– and head toward western Indiana, where there will be rest stops, fireworks warehouses and maybe a McDonald’s.

It’s just another route Peyton Ramsey is starting to learn.

During the week, Northwestern’s new grad transfer quarterback is learning a completely new offense through Zoom tutoring sessions with offensive coordinator Mike Bajakian. But after a few weeks, Ramsey wanted to take the offense out for a spin.

So he drove the five hours to Evanston to meet two of the Wildcats’ best receivers –– seniors Riley Lees and Ramaud Chiaokhiao-Bowman. They went over concepts in NU’s offense, practiced a few of the offense’s signals and ran a few of the plays they hope to convert in September.

“I got to see what his ball flight was like and see the ball coming out of his hands,” Lees said. “He got to see how we run things, and we got to start the process of seeing how we work.”

Ramsey met up with Lees, Chiaokhiao-Bowman and sophomore receiver Raymond Niro III. After Ramsey arrived, the receivers lined up to catch passes from the Cats’ biggest offseason addition and tried to help accelerate Ramsey’s transition to a new team.

After announcing his transfer to Northwestern in March, Ramsey sent a text to every player on the offensive side of the ball to introduce himself. Since then, he has worked out in Cincinnati, including sessions with junior quarterback Andrew Marty and junior tight end Trey Pugh.

Every Thursday, Ramsey participates in Zoom meetings led by the quarterbacks. The players go over signals and break into position groups, but they also catch up with each other.

“(Relationships) have been the hardest part of all this,” Ramsey said. “Not learning the playbook or anything like that.”

The quarterback still has 99 days before Northwestern’s scheduled start to the 2020 season and the season opener at Michigan State. He still has time to acclimate himself to the new environment, but Ramsey transferred to Northwestern intending to start from the jump.

A three-year starter at Indiana, Ramsey threw for 2,454 yards last season, completing 68 percent of his passes. He was named honorable mention on the postseason all-Big Ten team. He brings a track record of success to a Northwestern team whose quarterbacks threw for just 1,404 yards and six touchdowns combined last season.

“He fits Northwestern’s profile,” Bajakian said. “He’s tough, smart, athletic, and he’s played a lot of football and won a lot of football games. (He) did a good job at Indiana, had been the starter for all or parts of three seasons, so he’s a guy that can that can come in here and compete right away and make an immediate impact.”

Related stories:
— ‘You guys are going to want to hear this’: Inside Northwestern’s pursuit of graduate transfer quarterback Peyton Ramsey
— Mike Bajakian and Pat Fitzgerald are designing a new offense for Northwestern