The Daily Northwestern • May 27, 2020 • https://dailynorthwestern.com/2020/05/27/campus/im-never-myself-northwestern-theatre-major-navigates-campus-life-remote-learning-and-autism/ 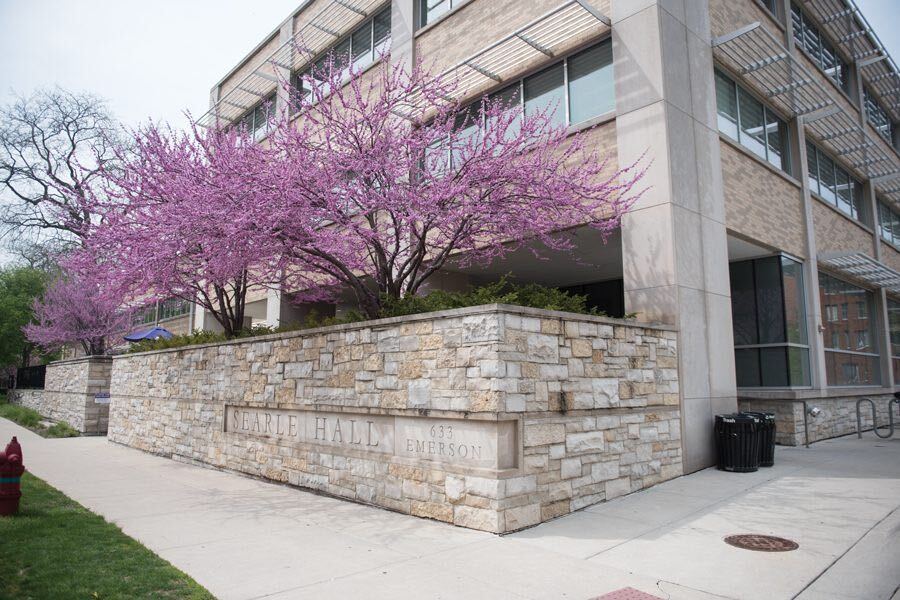 Searle Hall, home to the Counseling and Psychological Services. CAPS employees one staff psychiatrist with a speciality in autism, but generally refers students to outside services for specialized care.

At 11, Douglas was diagnosed with Asperger’s syndrome, a disorder which has since been re-classified more broadly under autism spectrum disorder in the DSM-5. “Autistic burnout” is a popular term among the autistic community for the mental exhaustion that results from trying to pass as neurotypical.

A Communication sophomore majoring in theatre, Douglas navigates the challenges of Northwestern, and recently, a remote quarter, alongside obstacles brought on by their disorder.

“Everyone has an ice cream cone, and each autistic person gets scoops of different symptoms,” Douglas said. “Maybe they get no scoop at all, maybe they get a really big scoop.”

For Douglas, these symptoms involve sound and light sensitivity, social challenges such as eye contact and determining sarcasm, auditory processing difficulties (they often need to look at someone’s mouth to determine what they are saying) and attention deficits. Alongside these struggles are anxiety and depression, Douglas said.

Another major challenge is navigating social interaction. Douglas said they rely on “social scripts” to determine how to behave appropriately in a given situation. They likened it to someone rehearsing a food order in their head before going up to the counter to order — except they do that in “almost every” situation, Douglas said.

According to Douglas, this daily practice drew them to theatre.

“Theatre is basically what I do every day,” Douglas said. “I’m never myself, I’m always someone else that neurotypical people want to see. So I think theatre is sort of the ability to have fun with that.”

In addition to pursuing theatre coursework, Douglas is a member of Seesaw Theatre, an on-campus theatre group that produces multisensory work for autistic and similarly disabled audiences.

According to Communication junior and Seesaw executive director Susie McCollum, Seesaw shows are “choose your own adventure”-style with a balanced combination of nonverbal characters, characters that sing, sensory-friendly props and adventure guides, who are cast members that help provide a catered, one-on-one experience to audience members.

It’s this image of balance in the individualized, one-on-one relationship between audience members and adventure guides that defines the Seesaw mission and gave the group its name, McCollum said.

According to Douglas, the rest of the on-campus experience is less autism-friendly.

In the winter, Douglas dropped a class because the sensory experience of the massive classroom was overwhelming. Dining halls and other crowded common areas are equally stressful, they said. They cope with the stimulating campus environment by wearing sound-proofing headphones.

Although Douglas called the home environment “less stressful,” remote learning this spring has brought its own challenges.

Douglas cited the feedback or microphone quality of classmates on Zoom calls as a source of sensory stress. They turn the sound down on some louder speakers, but this can be an issue if some speakers are louder than others. For this reason, Douglas said they often have trouble hearing their professor’s voice in acting class. And then, to manage the visual overload, they use the “pin video” function to focus on one individual and see the speaker’s mouth move.

Beyond medication and cognitive behavioral therapy to manage their comorbid mental health struggles, Douglas hasn’t received treatment or services for their autism. Instead, they said they rely on online resources for coping strategies.

“I was one of those gifted kids,” Douglas said, describing their K-12 experience. “It’s sort of hard to come to the realization that you were basically one of the special ed kids but you behaved enough like a neurotypical that they let you go.”

Douglas tried to apply for services through AccessibleNU, but after a paperwork mix-up, they found the process to apply for accommodations confusing and ultimately gave up.

And Douglas said they haven’t seen evidence of significant support for autistic students on campus.

According to Douglas, after Seesaw sent out a survey to the community regarding individual language preferences when speaking about disabilities, most of the responses were from family members or therapists, not diagnosed individuals themselves.

As McCollum said, the group tries to support disabled individuals using the mantra of the Autistic Self Advocacy Network — “nothing about us without us.”

Antonia Young, Weinberg junior and co-operations director of AMASE, the Northwestern music tutoring program for students with special needs, said she is not aware of on-campus autism support networks beyond AMASE and Seesaw, which primarily serve non-Northwestern students.

“I’m assuming that there are (other) autistic people at Northwestern,” Douglas said. “I just don’t see a lot of evidence of that, or support for people like that, or being out about things like that.”

Correction: This article has been updated to reflect that adventure guides are cast members, not just Seesaw members. The Daily regrets this error.