The Daily Northwestern • May 26, 2020 • https://dailynorthwestern.com/2020/05/26/campus/academic/as-in-2008-humanities-majors-are-a-potential-casualty-of-the-imminent-recession/

As in 2008, humanities majors are a potential casualty of the imminent recession 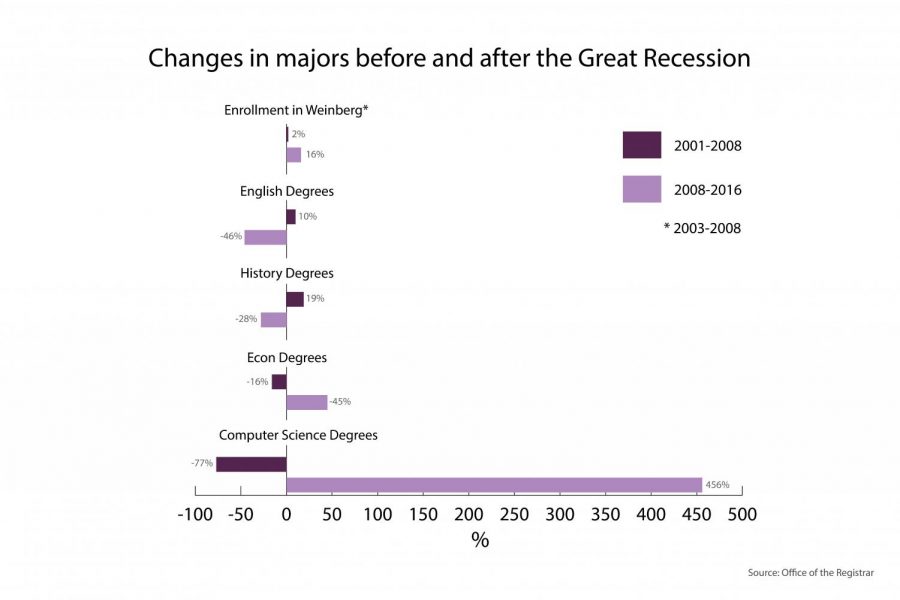 When Brooke Shankland (Weinberg ‘10, Kellogg ‘15) told her parents she had declared a major in philosophy, they told her to pick something more useful.

“My dad’s a lawyer and my mom was in finance and, to them, philosophy did not seem to be something that people would immediately be itching to hire,” Shankland said.

Shankland added a second major in economics, and when the recession hit during her junior year, the alumna said she was “grateful” for the combination. Philosophy helped her stand out, and economics provided marketable skills as she was searching for a job in the wake of the Great Recession.

In 2007, the housing bubble burst. In the subsequent year, Lehman Brothers, a global financial services giant, declared bankruptcy. The events triggered a massive recession which took humanities degrees as one of its many casualties.

With the pandemic plunging the world into what the head of the International Monetary Fund described as a “crisis like no other,” questions surrounding the current recession’s impact on degree choices remain.

The humanities suffered nationally and at Northwestern during the Great Recession

Ten years after 2007 peaks, the amount of English degrees had declined by 49 percent, history degrees by 45 percent, and philosophy degrees by 34 percent, according to 2018 reporting by The Atlantic. Northwestern’s numbers are not far off.

Although Weinberg fourth-year enrollment increased by about 16 percent from 2008 to 2016, the number of English degrees decreased by 46 percent, history degrees by 28 percent and philosophy degrees by 25 percent, according to data from the Office of the Registrar. By contrast, economics majors increased by 45 percent and computer science majors by 456 percent.

A 2016 study from Rutgers University noted since 2009, there has been an increase in the number of computer and information science bachelor’s degrees similar to the one induced by the 1990s “dot-com” boom. But the study noted the shift could reflect a move toward “recession-proof” majors.

Before the 2008 recession, the college major numbers told a different story. Between 2001 and 2008, English degrees increased by 10 percent, history degrees by 19 percent and philosophy degrees by 100 percent. Meanwhile, economics majors decreased by about 16 percent and computer science majors by about 77 percent.

As the United States enters another recessionary period, the humanities may again be at risk as students choose traditionally marketable majors to cope with the anxiety of a shrinking job market.

The myth of the marketable major

English prof. Bill Savage, said throughout his 18 years as a Weinberg College adviser, he has been battling “the word on the street” that majors like English, history and philosophy will not land students a job.

“First-year students arrive at Northwestern and are told by upperclassmen at a party, ‘Well, of course, you have to be an econ major with a (Business Institutions) minor and a Kellogg finance certificate, or you’ll never get a job,’” Savage said. “That’s just not true.”

Presnell said students find it easier when their major translates directly into a career goal, and they can do less of that marketing work as they begin the job search. But during recessionary periods, he noted employer expectations shift, requiring students to more explicitly articulate how they are a match, regardless of major.

The case for studying what you love

SESP sophomore Teresa Vergara Miranda was accepted into Northwestern as a McCormick student, but transferred to Weinberg in the fall of her freshman year before switching again to the School of Education and Social Policy. Undecided in Weinberg, Vergara Miranda said she briefly considered both the pre-medical track and the economics major.

As a low-income student, Vergara Miranda said she felt pressure to enter a financially stable industry. But she was miserable in general chemistry and found high-level economics courses to be too theory-based to seem practical.

In SESP, which offers programs like the junior year practicum, a quarter-long, off-campus internship, and a concurrent seminar, Vergara Miranda said she has found fulfillment and applicability that she felt was missing from her Weinberg courses. Eventually, she said she wants to attend law school and pursue immigration law.

“In the past few months I’ve realized that I will have a good-paying job regardless, but I want to be happy and passionate in what I do,” Vergara Miranda said.

As an adviser, Savage said he encourages his students to study what they love.

“If you study what you love and are good at, you’re going to be happy while you’re at Northwestern, instead of being miserable,” he said.

Savage emphasized that this focus on the present is especially important during a time of uncertainty.

“In 2008, people thought they were set for life when they got a job at Lehman Brothers,” he said. “And then when Lehman Brothers crashed and precipitated the recession, suddenly they discovered that there are no guarantees.”

The graphic for this article has been corrected to reflect that data on enrollment in Weinberg is drawn from 2003 to 2008, while information about the degrees is drawn from 2001 to 2008. The Daily regrets this error.