The Daily Northwestern • May 20, 2020 • https://dailynorthwestern.com/2020/05/20/sports/swimming-jeremy-kipp-leaves-northwestern-for-top-job-at-usc/ 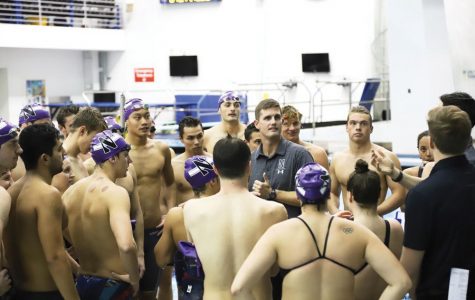 Jeremy Kipp talks to his team. After two years at Northwestern, Kipp accepted the head coaching job at USC on Tuesday.

In just two years at Northwestern, Jeremy Kipp left his mark on both the men’s and women’s swimming programs.

The men had been stuck near the bottom of the Big Ten for several years, while the women sat consistently in the middle of the pack. But this season, both programs made major strides at the conference championships, with the men moving from ninth place to fifth — their highest mark since 2007 — and the women from seventh to fourth, their best finish since 2002.

Now, Kipp has parlayed that success into a new role, returning to one of the best college programs in the country. Kipp accepted the head coaching position at USC on Tuesday, where he was an assistant from 2008-2015.

“I want to thank Dr. Jim Phillips, the coaches and the Northwestern athletic department,” Kipp said in a release. “We were able to accomplish significant strides in two years with the unyielding effort and commitment from the Wildcat student-athletes.”

Kipp coached 13 All-Americans on the women’s team this past season and seven on the men’s team. Junior Calypso Sheridan won Big Ten titles in the 400-yard individual medley and the 200-yard breaststroke, and sophomore Markie Hopkins took home the championship in platform diving.

During Kipp’s time as an assistant at USC, the Trojan men finished in the top 10 at the NCAA Championships five times, while the women did so six times. Between 2011 and 2015, USC produced 38 individual NCAA champions.

Kipp then left Los Angeles for his first head coaching position at Boise State, where he led the Broncos’ women-only program. He was named Mountain West Conference Coach of the Year in each of his three seasons in Boise and won conference titles in 2017 and 2018.

Northwestern will now begin a search for Kipp’s successor, but the University’s hiring freeze due to the COVID-19 pandemic may lengthen the search process. The swimming news website SwimSwam called Northwestern “the biggest job open” and mentioned current associate head coach Katie Robinson as a potential leading candidate.