The Daily Northwestern • May 17, 2020 • https://dailynorthwestern.com/2020/05/17/sports/mens-tennis-their-season-derailed-northwestern-reflects-on-an-unresolved-year-and-looks-to-the-future-with-cautious-optimism/

Men’s Tennis: Their season derailed, Northwestern reflects on an unresolved year and looks to the future with cautious optimism 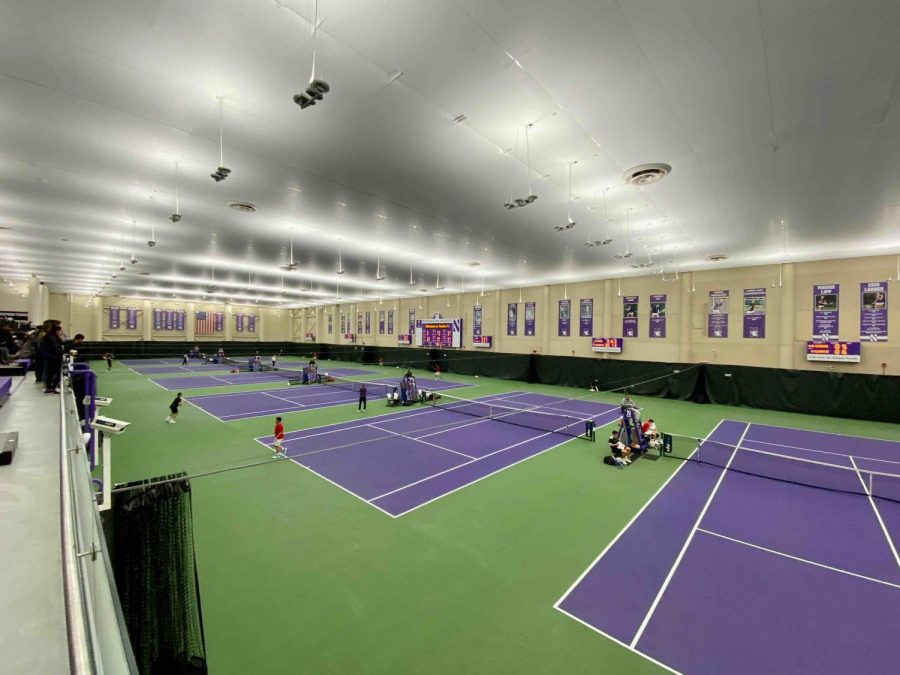 Combe Tennis Center in Evanston, the indoor home of Wildcat tennis. Northwestern was off to a 10-5 start before its season was canceled due to COVID-19.

On the clear, mild evening of March 8, Northwestern defeated Illinois-Chicago at the Combe Tennis Center in Evanston. The Wildcats were not seriously challenged by the Flames, getting dominant performances from sophomore Steven Forman and senior Chris Ephron in a 4-0 victory. NU moved to 10-5 with the win.

One week later, the Cats’ recent win had become a quaint relic of another world, leaving coach Arvid Swan and his squad to grapple with the implications of a lost season and an uncertain future.

“I heard through our administration,” Swan recalled, describing the afternoon of March 12 when the Big Ten, and later the NCAA, canceled all sporting events through the end of the 2019-20 academic year due to the COVID-19 pandemic. “Everyone at the time was seeing all these other things being canceled… I just brought (the team) together and told them. The guys were mature about it.”

Seniors Ephron and Dominik Stary, who have eight seasons of NU tennis under their belts between them, were granted the option to return in 2021 by the NCAA, along with all other spring-sport seniors. The two players teamed up in a doubles match in the season finale, defeating the Flames’ duo of Johan Hedstrom and William Wale 6-1.

Instead of preparing for future matches, the Cats suddenly found themselves scattered across the world, marooned at home and searching for ways to pass the time. For Swan, the quarantine has meant meticulously juggling professional life and family time as well as occasional relaxation.

“From a tennis perspective, I’ve been doing a lot of professional development related to analytics,” the 13th-year coach said. “But I’ve got two young kids, so I’ve been spending a lot of time with my family and helping them with their schoolwork.”

Swan said he has spent some of his spare time watching “Ozark” on Netflix, which Pickens also said he enjoys. Pickens added that he has still been able to play plenty of tennis in quarantine, even teaching his younger sister some of the finer points of the game.

Family ties have also benefited Forman, who has been practicing with his brother, a volunteer assistant tennis coach at Princeton.

Swan said he has made keeping the team connected a centerpiece of the quarantine, holding phone calls with individual players and group Zoom calls.

“The Zoom calls are good, we all get on a call, we all give updates on what we’re doing,” Pickens said. “I think they help keep us in touch, I think we’ve been using them well to keep the team close and keep the team on the same page.”

Reflecting on the season that wasn’t — the first unfinished campaign in the program’s 87-year history — Swan expressed regret for a team that had won four of its last five matches before the abrupt shutdown.

While the immediate future of college sports remains in flux, Swan believes his team’s camaraderie and close bond will benefit them in the long run, on and off the court.

“It’s a really good group of guys, and they’re close with one another,” he said. “I feel like whenever we’re back together, we’re gonna have that same hardworking attitude as before.”