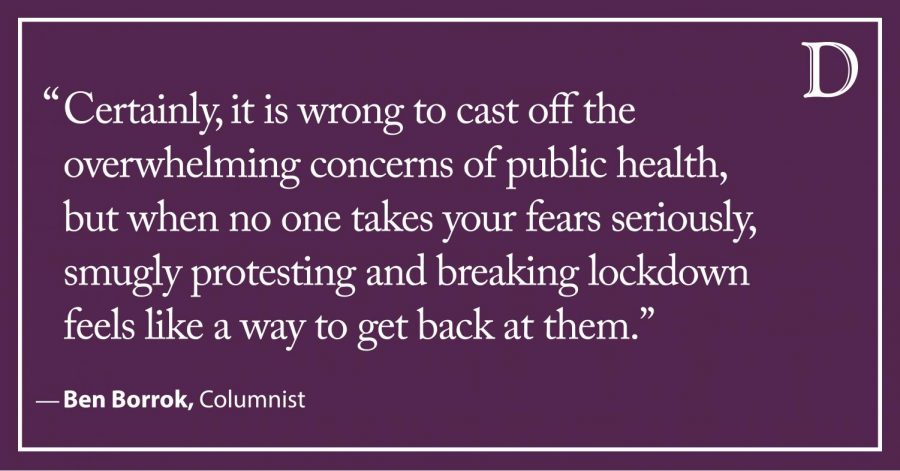 Those that have spent excess time on the internet, as I am known to do, have inevitably run into the tense conversations that develop out of tragedy. What starts as a series of tributes to those suffering from unimaginable circumstances mutates into a competition. But this race to find out the person who has suffered the most has unintended consequences. It minimizes the struggles of others, resulting in a group of people finding themselves angry and hurt by the comments from those online.

The newest competition centers around the COVID-19 pandemic, with people of all ages comparing and criticizing others who have logged on to express grief about their own situation. High school and college seniors were called selfish for complaining about the loss of what should’ve been the proudest days of their lives because, as the internet rudely explained, others had it much worse than them. It may be true that doctors, nurses and the sick have lost a lot more than others, but part of me feels uncomfortable with the idea of discounting someone’s grief simply because it isn’t the maximum amount of grief one could endure.

We are nearly 10 weeks into the COVID-19 pandemic in the United States, and the death toll and widespread suffering that has taken place was unimaginable when the first case was reported. The seemingly never-ending climb of these numbers has weighed heavily on the American public, with certain populations beginning to revolt against the lockdown orders across the country. In a way, it is sort of stunning to watch the pandemic be politicized, but it isn’t surprising, not here at least.

While other countries have fought to control the spread, there have been clear signs that their efforts have worked, while the United States is only seeing meager results. Despite the warnings from scientists, a number of states have given in to the protests and have begun the process to reopen. Just like everyone else, I want these reopening plans to work and encourage more states to do the same. The need to provide economic stability to the American people is a crucial reason for opening the states, but I am afraid that reopening, just for the sake of defying scientific authority, will do more to damage the state than benefit its economy.

Yet, despite the urging of qualified individuals across the country, a growing number of people on social media have proudly displayed violations of stay-at-home orders. To those who express concern with their actions, protestors show a shocking amount of callousness, exclaiming that Democrats want a permanent lockdown to destroy the country. Not for one second do people violating stay-at-home orders think about the harm their actions do to others — to the immunocompromised, to the graduating seniors, to the elderly, to those on the front line.

At first, it is hard to comprehend why someone wouldn’t possess empathy, but it becomes clearer when we return to the grief competition I spoke of earlier. Everyone is afraid of what comes next, even if some are better at hiding it than others. When your fears are considered small in comparison to someone else, however, we feel disrespected, and when we feel disrespected, we find it harder to empathize. I have been battling with making sense of how to feel in the shadow of the pandemic, feeling stuck between feeling upset about the loss of a portion of my college experience and summer while also feeling guilty for how small my loss is in comparison to thousands of people who have paid the ultimate price.

Refusing people the opportunity to express grief isn’t healthy, especially when they have genuine reasons. Livelihoods are being lost to the pandemic and many are feeling the pressure, so it is important to acknowledge the difficulties that we all face together. We don’t get to tell people how to feel, despite the internet’s belief that criticism is central to discourse. What results is a fatigue and a withdrawal from the conversation itself. Certainly, it is wrong to cast off the overwhelming concerns of public health, but when no one takes your fears seriously, smugly protesting and breaking lockdown feels like a way to get back at them.

If we are to safely return to a sense of normalcy, we need to remind everyone that expression of feelings and mental health are just as important for doctors as they are for a business owner. Lack of empathy will only persist if we continue to harp on minute losses and disappointments, rather than the bigger picture.