The Daily Northwestern • May 15, 2020 • https://dailynorthwestern.com/2020/05/15/multimedia/audio/defining-safe-the-path-to-a-minor-in-native-american-and-indigenous-studies/

Defining Safe: The Path to a Minor in Native American and Indigenous Studies 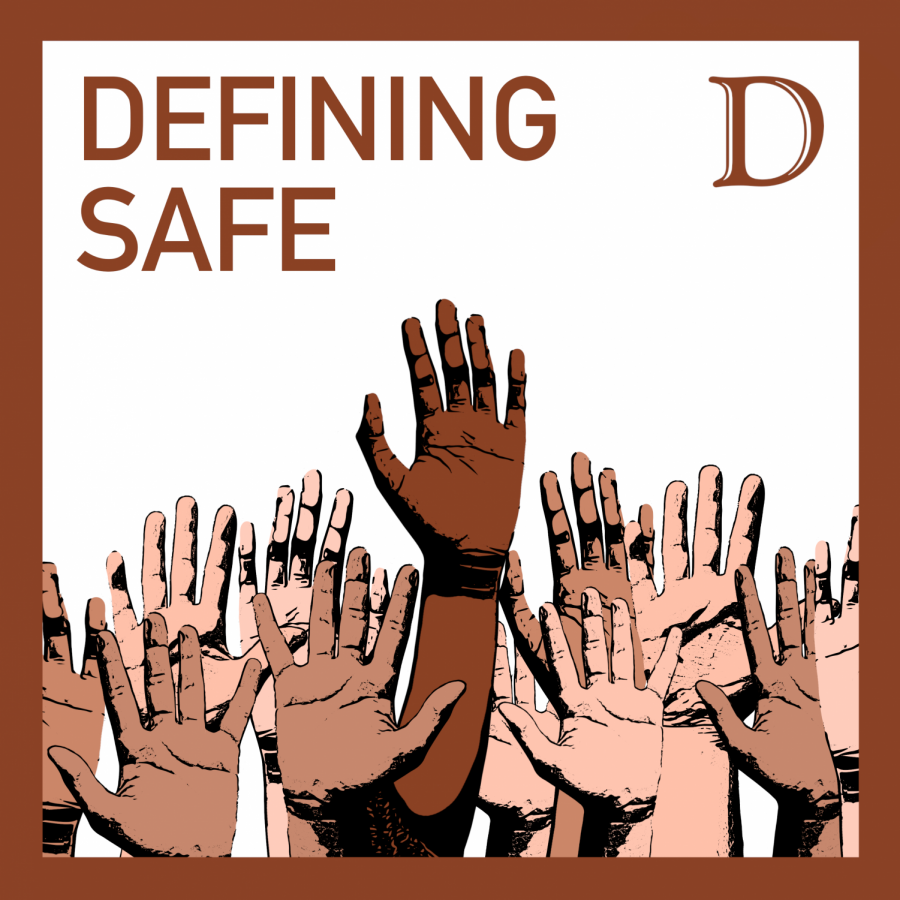 For years, students at Northwestern have been pushing the University to reckon with its history and complicity in settler colonialism. One of their principal demands? A program in Native American and Indigenous Studies. This program is now set to launch as a minor in Weinberg College.

PATTY LOEW: Native Americans are one of the invisible populations.

LESLEY-ANN BROWN-HENDERSON: Not only are they perceived as people of color, but there’s also this historical context around treaties and sovereignty and the relationship between Native and Indigenous communities and our U.S. government.

DOUG KIEL: We can’t have hope for a more just future for Indigenous people in North America without educating students to have a clearer sense of the political dilemmas that Native Communities face.

BINAH SCHATSKY: You may be familiar with some of the recent history. In 2015, there was a call from students for a name change to the John Evans Alumni Center. In 2019, the name John Evans was painted in explicit terms on the rock, along with the phrase “THIS LAND IS COLONIZED.” In 2020, the administration has chosen to keep the name, at least so far.

BINAH SCHATSKY: From the Daily Northwestern, I’m Binah Schatsky, and this is Defining Safe, a podcast about the experiences of marginalized communities on campus.

BINAH SCHATSKY: This fall, Northwestern is launching a new minor in Native American and Indigenous Studies through Weinberg. The student-driven push for Indigenous visibility on campus has a deep and complicated history, one that begins with dark truths about the University’s past. The new interdisciplinary minor is the next piece of that history — a major step forward in a longstanding struggle.

BINAH SCHATSKY: Patty Loew is a professor at Medill and had a principal role in the creation of the minor.

PATTY LOEW: When I arrived in 2017, I was asked to become the inaugural director of the Center for Native American and Indigenous Research, which we call CNAIR.

BINAH SCHATSKY: The creation of CNAIR was part of a larger series of efforts to hire more Native faculty and jumpstart Native American and Indigenous initiatives on campus. And it came from a call from students for the University to confront a dark history regarding its key founder, John Evans.

BINAH SCHATSKY: John Evans was the territorial governor of Colorado in 1864, when a U.S. militia brutally attacked Cheyenne and Arapaho men, women and children who were under the protection of the U.S. government. This tragedy is known as the Sand Creek Massacre.

PATTY LOEW: So the University basically had collective amnesia about the role its founder had played in this.

BINAH SCHATSKY: But in January of 2013, this began to change. The Native American and Indigenous Students Alliance, or NAISA, launched a petition demanding the University to reckon with its history.

BINAH SCHATSKY: In response to the petition, Dan Linzer, the provost at the time, organized a committee of scholars from Northwestern and beyond to interrogate John Evans’ role in the Sand Creek Massacre. In October of 2013, when they were about halfway through their research, they held an open forum with the community to share their work. Jasmine Gurneau is the current manager of Native American and Indigenous Initiatives in the Office of the Provost. Back then, she was on campus as a research coordinator for a psychology lab, and she attended the forum.

JASMINE GURNEAU: So it was standing room only, folks from Northwestern, from the Chicago Native community; everybody was there. There were folks lined up along the stairwells, everything in the back.

LORENZO GUDINO: Oh, I remember it was intense. It was really intense.

BINAH SCHATSKY: That was Lorenzo Gudino, Medill Class of 2017. Lorenzo grew up as part of the Chicago Native community, and he also attended the forum during his freshman year.

LORENZO GUDINO: It was about neutrality, and Northwestern saying that they hand-selected folks to be on their research committee to look into everything. Everyone for the most part was affiliated with Northwestern, had a stake in whatever was going to be the outcome.

JASMINE GURNEAU: And they were just pushing them back, on “Where are you getting your sources from?” “Are you asking Cheyenne and Arapaho folks?” “Where are the Natives on the committee?”

LORENZO GUDINO: It was a lot, it was a lot. Especially for a freshman, I was like “OK, what’s going on?” And then I quickly caught up to speed, and then I was ready to do those forums and have those types of conversations as well.

BINAH SCHATSKY: So after the forum, the University started making changes. Northwestern formed the Native American Inclusion and Outreach Task Force, made up of students, faculty, community members and staff. That included Dr. Lesley-Ann Brown-Henderson, executive director of Campus Inclusion and Community.

BINAH SCHATSKY: And while that was happening, students like Lorenzo were continuing their campus advocacy. More Native faculty were being hired, and courses were being added. But there still wasn’t a curated, for-credit path through the coursework. Lorenzo petitioned to count the courses he took in Native and Indigenous Studies toward the Weinberg concentration required in Medill.

LORENZO GUDINO: I feel like as a Native student, it was important to me to see that institution that I attended had the opportunities for me to go ahead and focus on something I really really cared about, which was Native American and Indigenous courses and content.

BINAH SCHATSKY: And amid this work, the report on John Evans was published. Remember the committee that was formed in 2013 and held the open forum? Well, in 2014, they laid out their conclusions. And there were concerns.

Around the same time that Northwestern was looking into John Evans’ role in Sand Creek, the University of Denver, also founded by John Evans, was doing the same. When the two reports came out, there were striking discrepancies. So much so that the University of Denver actually devoted a section of their report to pointing them out. Denver identified John Evans as deeply culpable in the massacre. Patty Loew pointed out where Northwestern differed.

PATTY LOEW: Northwestern’s conclusions were mistakes were made and he was flawed, and he shouldn’t have covered up the massacre, but he also founded hospitals, and he was a philanthropist. And so, we’re sorry but we’re not going to take responsibility in any way for this.

BINAH SCHATSKY: And it seems that this was an understanding that stuck. Remember the administration’s 2020 decision to not remove Evans’ name from campus buildings? In February, The Daily spoke to the chair of the Board of Trustees, J. Landis Martin, about how this decision came about.

J. LANDIS MARTIN: We feel that John Evans, his conduct, didn’t rise to the level of taking his name off of anything and that on balance, that his conduct during his life was exemplary.

BINAH SCHATSKY: And just last month, The Daily spoke to the Provost at the time, Jonathan Holloway.

JONATHAN HOLLOWAY: I think the bar to change a name should be really high, because otherwise there could be madness in the system of always changing things. However, if a name is seen as being out of line with the University’s values — deeply subjective again — then you’re in a different place in the conversation.

BINAH SCHATSKY: J. Landis Martin also said the Board will not reconsider its decision to keep John Evans’ name on campus spaces. But this has been a conversation for a while.

BINAH SCHATSKY: Back to 2014. After the study committee published their report, part of the job of the Native American Inclusion and Outreach Task Force — the one Dr. Brown-Henderson was on — was to review the report and make recommendations accordingly.

LESLEY-ANN BROWN-HENDERSON: I think someone counted how many times “savage” was written in that document, and it indicated to the community, whose lenses the study was written through. If I could summarize the main conclusion, it was: Northwestern has a lot of work to do.

BINAH SCHATSKY: And so the task force published their report on how the University could start making changes. One of their recommendations was the creation of a certificate or minor in Native American and Indigenous Studies.

By the time Patty Loew got to Northwestern in 2017, the University was receiving funding for Native American and Indigenous initiatives, CNAIR was up and running and there were enough Native faculty and courses to curate a minor. Patty Loew spearheaded the design.

PATTY LOEW: If you’ve ever hung around Native people, you know that we love things in four — the Four Directions, the Four Winds, the Four Elements, the Four Races of Humankind — so we thought that an appropriate way to think about this was to explore the four directions of learning.

BINAH SCHATSKY: Students pursuing the minor choose two foundational courses in addition to courses in four scholarly directions that branch out from the core. These are: Creative Expression, Social Worlds, Natural Worlds and Global Indigeneities. The minor is designed to be interdisciplinary, and students can take courses across a wide variety of departments. Prof. Kelly Wisecup teaches courses in the English department that study the rich tradition of Native literatures in English but also in Native languages and non-alphabetic forms of writing like wampum and quipu. Prof. Doug Kiel teaches in the history department.

DOUG KIEL: The bar for the level of political discourse about Indigenous issues is disappointingly low in the United States. And Northwestern is preparing leaders of global society, and I think it’s important as we’re preparing such future leaders of a global society that students have a clear sense of the place of Indigenous people.

BINAH SCHATSKY: Prof. Kiel teaches a foundational course for the minor on Indigenous resistance in the U.S. and Canada.

DOUG KIEL: The minor is a really crucial component of being able to practically offer something for potential Native American recruits who seek to come to Northwestern. In addition to educating the non-Native majority on campus, also to open spaces for welcoming more Native students on campus as well.

BINAH SCHATSKY: And as Patty Loew explained, the University has a major responsibility to contend with, to its history and to its students.

PATTY LOEW: If you look at some of the reports from Big Ten universities, for example, Native students on campuses, this is one of their major complaints: We feel invisible.

BINAH SCHATSKY: The creation of this minor is just one step in a larger effort that came out of years of advocacy from students like Lorenzo and his friends.

LORENZO GUDINO: I’m just absolutely over-the-moon ecstatic and excited and amazed that this is the next step in all the work that has been going on for so many years. And I’m really really excited to see what’s next.

BINAH SCHATSKY: From the Daily Northwestern, I’m Binah Schatsky. Thanks for listening to Defining Safe.

BINAH SCHATSKY: This episode was reported and produced by me, Binah Schatsky. The audio editor of The Daily Northwestern is Molly Lubbers, the digital managing editors are Kalen Luciano and Heena Srivastava, and the editor in chief is Marissa Martinez.