The Daily Northwestern • May 14, 2020 • https://dailynorthwestern.com/2020/05/14/city/evanston-coffee-shops-navigate-second-month-of-shelter-in-place/ 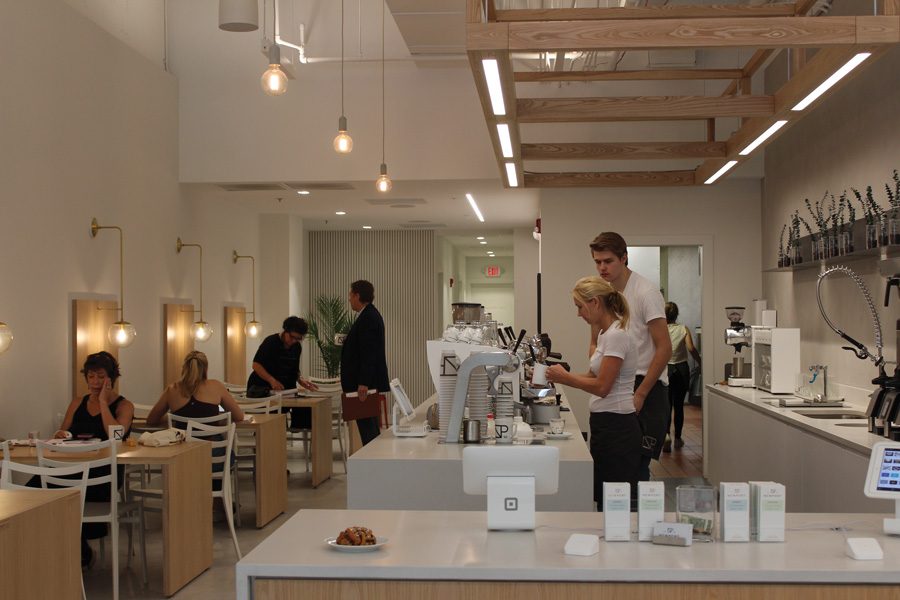 Inside Newport Coffee House. Newport is one of the few coffee shops to remain open since Gov. J.B. Pritzker issued the stay-at-home order.

Usually a hotspot for conversation and productivity, coffee shops are adapting to a new way of serving customers amid shelter-in-place orders.

Newport Coffee House, which opened in Evanston last July, is one of few city coffee shops that didn’t close or change its hours since Gov. J.B. Pritzker issued Illinois’ stay-at-home order in late March. Instead, the cafe cut down “tremendously” on staff, has limited capacity to three people at a time and requires all customers to wear masks, team captain Kajsa Vave said.

Since the stay-at-home order began, Newport’s revenue is down 50 percent, and the cafe’s atmosphere has significantly changed, Vave said.

“Keeping the shop open depends on how many people we bring in,” Vave said. “Having every seat filled with paying customers is the goal to keep the shop running properly, but since that can’t happen, we need to be more creative.”

Byron Dow, assistant manager of Peet’s Coffee in Evanston, reopened the Chicago Ave. cafe on May 4. After a week’s worth of “deep cleaning” to prepare the store for reopening, Dow said it felt good to be back.

While Peet’s was closed in April, Dow said employees continued to receive pay and healthcare benefits.

Peet’s California locations remained open for the most part in April, Dow said, but the Evanston cafe was one of only six reopened stores in the Atlantic division.

“We get to lead that charge,” Dow said. “And I see us taking a lot more precautions, which I think is encouraging. People seem to be really appreciative.”

Since reopening, Dow has seen business at Peet’s steadily improve, aside from a few rainy days last week. While the cold weather has kept the cafe from reaching as wide a customer base as it hoped, Dow said that as it warms up, he expects business to improve.

“While of course business is not nearly as good as it was before COVID-19, I do think that we can get back there,” Dow said.

Donnelly said most customers coming in are regulars who have been visiting for 30 years, and the cafe averages around eight to 10 customers per day. Those who have been coming in have been “fantastic,” she said, with some regulars making donations to provide coffee for local first responders.

“What’s nice is Evanston is still Evanston,” Donnelly said. “People are really trying to do their best and are making an effort to help others, and that’s very encouraging.”