The Daily Northwestern • May 14, 2020 • https://dailynorthwestern.com/2020/05/14/campus/northwestern-faculty-senate-talks-financial-impact-of-covid-19-uncertainties-around-fall-quarter/ 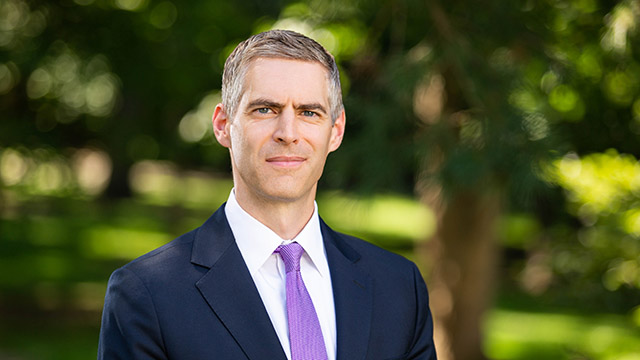 Craig Johnson, senior vice president of business and finance, spoke at this month’s Faculty Senate meeting about how the University’s finances were hit by COVID-19.

Northwestern administrators emphasized recent financial “sacrifices” and uncertainty about the future at the May Faculty Senate meeting Wednesday evening.

Senior Vice President for Business and Finance Craig Johnson and Interim Provost Kathleen Hagerty represented the administration in speaking to faculty about coronavirus’s impact on University finances and contingency plans for Fall Quarter.

Johnson commented on University President Morton Schapiro’s Monday email, in which he announced an anticipated budget deficit, 250 staff furloughs, administrator pay reductions, increased draws from the endowment and a suspension of contribution to retirement plans. When asked about comparing the hit to the University’s finances between COVID-19 and the budget crisis, he said the financial loss is much larger because the pandemic has targeted every revenue stream.

“Going into the fiscal year, we were coming out of a budget crisis but we were rapidly emerging and planned to have a breakeven budget for the year,” Johnson said. “Then COVID-19 hit, and the various impacts have been rather traumatic to the University.”

Johnson broke down the specific areas damaged within the University’s $90 million revenue shortfall for the 2020 fiscal year. The shortfall comes from about $25 million for Spring Quarter room and board, $25 million for tuition, the transition to distance learning, the loss of March Madness revenue streams, troubles with the endowment payout and more, Johnson said. The endowment, he said, has decreased this year from about $11.3 billion to about $10 billion — a 12 percent drop.

Medill Prof. Ceci Rodgers asked Johnson whether administrators would reconsider accepting the $8.5 million in federal CARES Act money that the University turned down last month. Some peer institutions have accepted their allocation of the funding, and in much larger quantities, she said. However, Johnson said the University plans to stand by its decision, especially considering the public and political pressures scrutinizing top-tier universities for being awarded such large sums.

In addition, Johnson said the University was initially planning on furloughing 1,000 staff members, but given the change to the retirement match, 250 staff members who “could not do their jobs in this environment” were furloughed instead. Given the uncertainties around Fall Quarter and the large stream of revenue the University receives from aspects of University life like the college football season, Johnson said the potential loss could cause future layoffs and furloughs.

“The senior leadership cuts don’t actually save that much money, but I think it was more a symbolic thing,” Hagerty said. “They were truly 20 percent cuts, but when you add it up it isn’t a ton of money. The thing that was a ton of money was the pension cuts.”

The University has assembled workgroups tasked with modeling all possible outcomes and contingency plans for “reactivating” campus in the future, Johnson said — but whether remote learning will continue in Fall Quarter is still up in the air. He added that “fall is looking more and more remote,” directing faculty questions about the fall to Hagerty, who is leading big-picture restructuring for a future on campus.

Hagerty echoed Johnson’s sentiments and said it’s a “pretty safe bet” that there will be some sort of online capacity regarding Fall Quarter classwork. She attributed the likelihood to faculty concerns about expectations of immunocompromised, elderly and vulnerable people to properly distance themselves once campus activities are resumed.

Philosophy Prof. Baron Reed asked Hagerty about the equity issues regarding remote learning on the student side. He said he noticed a loss of the layer of concern and care faculty share with their students that cannot be mimicked through virtual meetings or lectures. Reed then asked whether there were any support systems being developed regarding check-ins with students.

As a leader in the planning of Fall Quarter, Hagerty said many of her discussions have focused on non-physical activities and facilitation to reconnect the community. Student Affairs has expressed concern about the mental health of students and is creating more remote student engagement opportunities, she said.

“Our job is to serve the students and to make sure we give them a really good education so we really have to think hard about those issues,” Hagerty said. “We’re kind of moving away from (getting) by for one quarter into thinking a little harder about what if this lasts longer than we’re all hoping.”