The Daily Northwestern • May 13, 2020 • https://dailynorthwestern.com/2020/05/13/sports-covid-19/three-journalism-professors-share-their-experiences-covering-michael-jordan-era-bulls-in-the-last-dance/ 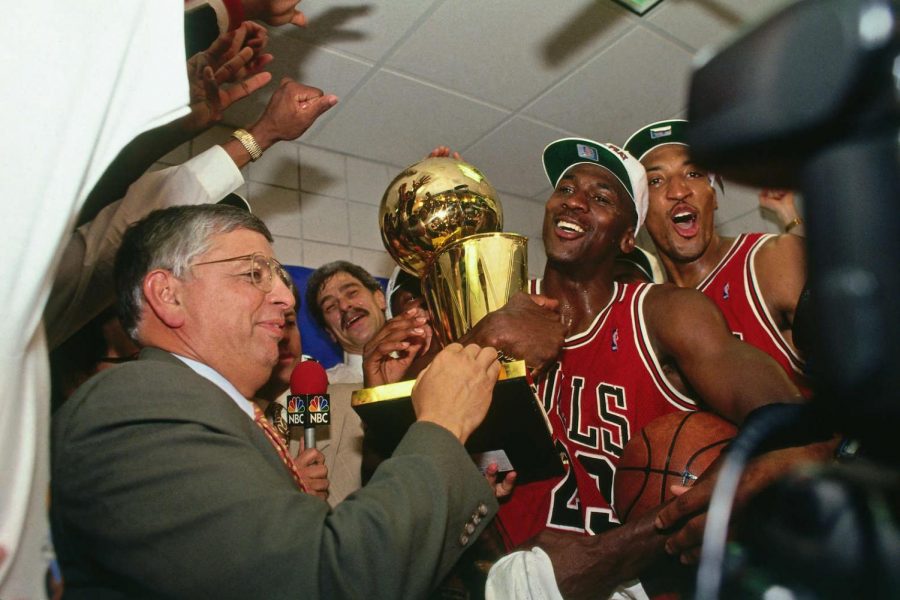 Michael Jordan in “The Last Dance.” Three Medill faculty members who reported on Jordan and the Bulls appear in the docuseries.

Following the opening title scene of episode one of “The Last Dance,” footage plays of the 1996-97 Chicago Bulls celebrating their fifth NBA title.

As players cheer and confetti rains from the roof of the United Center, a voice known to sports fans around the country says it was uncertain if the Bulls’ championship roster would return, despite winning their second consecutive title.

Seconds later, a 25-year veteran of the sports journalism industry adds that the championship placed the Bulls back at the top of the NBA hierarchy.

Michael Wilbon (Medill ’80) and J.A. Adande (Medill ’92) — two of the first interviewees featured in the ESPN 10-part docuseries — have more in common than their participation in Jason Hehir’s critically-acclaimed project.

Before making their way to ESPN, the journalists covered the Bulls during Michael Jordan’s prime and the franchise’s six championships: Wilbon at The Washington Post, and Adande for the Chicago Sun-Times, The Post and The Los Angeles Times.

Both received degrees from Northwestern and covered sports for The Daily as undergraduates. Now, the two are professors at their alma mater.

“When people would think of Northwestern sports and a lack of national success, (they) wonder how the school could produce so many people in sports media,” Wilbon said. “Those things are not mutually exclusive. We’ve always had that heavy flow from the college ranks into sports journalism.”

Adande and Wilbon, as well as Medill professor and former Chicago Tribune Bulls beat writer Melissa Isaacson, provide analysis and insight from their former journalistic positions in “The Last Dance.” The series follows Jordan’s career with the Bulls, with a primary focus on the 1997-98 season, Jordan’s last with the franchise that culminated in Chicago’s second championship three-peat.

Isaacson, the Tribune’s lead Bulls beat writer from 1991 to 1995, covered Chicago’s first set of championship wins. In 1995, she published her book “Transition Game: An Inside Look at Life with the Chicago Bulls” about how the franchise fared in the 1993-94 season without Jordan, who retired after the Bulls’ Finals victory over the Phoenix Suns the previous year.

The book discussed the season from various angles, such as how small forward Scottie Pippen’s MVP-caliber performance filled the leadership void left by Jordan.

Hehir and his crew interviewed Isaacson in the McCormick Foundation Center television studio and discussed topics such as Pippen’s emergence in the 1993-94 season and Jordan’s stint in minor league baseball.

Isaacson said she has enjoyed watching “The Last Dance” because it uses never-before-seen footage of the Bulls, including practices and scrimmages. She added that the docuseries has created a flood of memories from her time reporting on the team.

“I did realize how incredible it was,” Isaacson said. “Watching Michael Jordan and covering him on a daily basis was…the chance of a lifetime. I was very aware of what was unfolding and what I was seeing and that it would be something that I’d talk about for the rest of my life.”

During Jordan’s time on the Bulls, Adande covered the team from three different time zones in five years.

As a Bulls beat writer for the Sun-Times during the 1993-94 season, he reported on how the three-time defending champions performed without Jordan. At The Post, Adande wrote about how power forward Dennis Rodman fit into the Bulls’ system and covered Chicago’s back-to-back finals victories in 1995-96 and 1996-97, before moving to the Los Angeles Times.

Adande got to know Jordan in 1993 when he interviewed him on how his game-winning shot in the 1982 NCAA Championship game for the University of North Carolina kickstarted his basketball legacy.

When Hehir first approached him, Adande didn’t know if he could contribute to the docuseries’ main storyline of the 1997-98 season because he only covered the Bulls when they played at the Staples Center. But when the director told him “The Last Dance” would tell the story of Jordan’s entire career with the Bulls, Adande became “thrilled and excited,” and sat down for a one-hour interview.

“They were going to rely on journalists to help tell the story because they weren’t going to have a narrator,” Adande said. “So they needed you to say sometimes very basic, fundamental things because someone needed to explain these facts that help them get from one part of the documentary to another part.”

A Chicago native, Wilbon credits the 1970s Bulls teams with Jerry Sloan and Chet Walker for inspiring his love of basketball.

When Jordan entered the NBA in 1984, Wilbon paid close attention to the sensational rookie, but most of his reporting focused on the top teams of the mid-1980s, like Julius Erving’s Philadelphia 76ers, Larry Bird’s Boston Celtics and Magic Johnson’s Los Angeles Lakers. Wilbon said the Bulls did not become nationally relevant until 1988, when Chicago played the Detroit Pistons in the Eastern Conference Semifinals.

Wilbon connected with Jordan numerous times over the course of the six-time NBA Finals MVP’s career, from his time at North Carolina to his final season with the Washington Wizards in 2002-03. He credits Jordan for being a great participant in media interviews.

“He was easy to talk to, a great storyteller,” Wilbon said. “He loved the back-and-forth. He didn’t love it 24/7, but he was great at it. He was always on the All-Media Team, the All-Interview Team.”

At the 2019 All-Star Game in Charlotte, Adande saw a preview of “The Last Dance” during a promotional event and said it was going to “live up to the hype.”

And it certainly has. The docuseries, which was supposed to run in June during the NBA Finals, has averaged 5.6 million viewers after eight episodes. The two series premiere episodes averaged 6.1 million viewers, making them the most-viewed original ESPN content broadcasts since 2004. Its unprecedented success has inspired ESPN to release three 30 for 30 films months ahead of schedule after the docuseries’ finale this Sunday.

Despite having access to an advance copy of “The Last Dance,” Wilbon chose to watch the docuseries live with millions of other Americans for a personal reason.

“I want to watch it with my son and be able to discuss each episode with him,” Wilbon said. “There are questions going back and forth. ‘Why did they not call fouls the same as they call them now? Why were the games so rough? Why was Jordan so tough at practice?’ Those are all the questions you expect to get from a child… who doesn’t understand how the league operated 30 years ago.”

Throughout every episode, Adande and Isaacson live-chat over Zoom with graduate students in Medill’s Sports Media specialization about their experiences covering Jordan and the Bulls.

During his graduate program, Chris Kwiecinski (Medill ‘18), a sports reporter for The Spectrum & Daily News in St. George, Utah, traveled with Adande to the 2018 Winter Olympics in PyeongChang, South Korea and worked with Isaacson on his Master’s project about the WNBA. He said watching his professors appear in “The Last Dance” has given him a sense of pride.

“It speaks to the level of experience I had in my year at Northwestern,” Kwiecinski said. “When I look back, I really had some experienced people teaching me how to do some very high-level stuff.”

Both Medill professors, as well as Wilbon, have appeared numerous times on sports television and radio shows to discuss covering Jordan and the Bulls. Adande and Isaacson are scheduled to speak with Joshua Jonah Fischman (Medill ‘19), a co-host of the podcast “On the NBA Beat” over the next two weeks.

Fischman said he is excited to interact with his former professors for the first time as a member of the journalism industry.

“It’s just really cool and exciting that I had them as professors and always thought of them as educators and wonderful teachers,” Fischman said. “But now I’m seeing them as reporters and it’s really exciting to interview them.”

Although “The Last Dance” is a celebration of Jordan and the Bulls’ achievements, it also discusses controversial topics of his tenure in Chicago, such as harsh treatment of teammates in practice.

While these perspectives may shock young sports fans, Isaacson said she is watching the Michael she always knew.

“I don’t find him to be somebody unlikeable at all,” Isaacson said. “You know, they may be showing more of the rough side of him in practice, but Steve Kerr, who got punched directly in the face by Michael in practice, could still speak graciously about him. I think fans can see the competitive side and understand.”