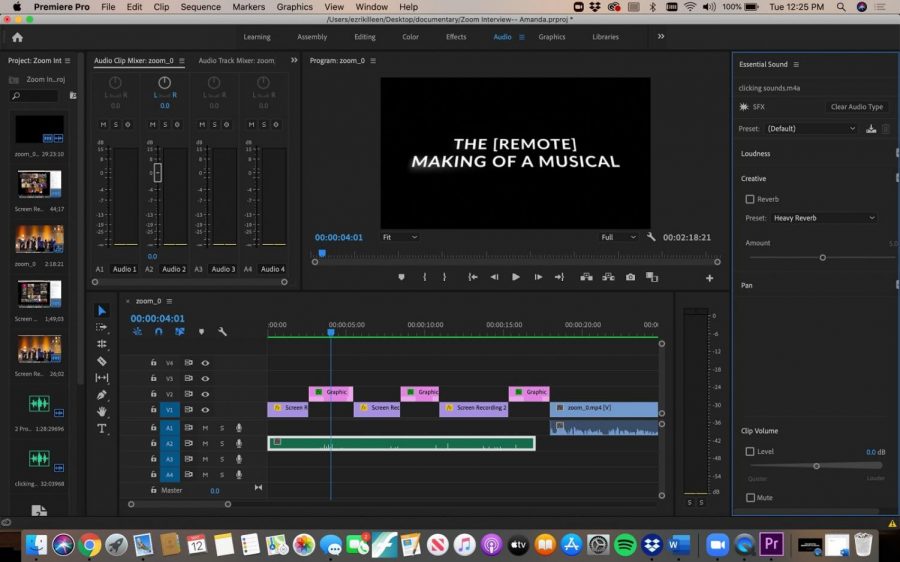 Ezri Killeen’s screen while editing. The junior said she’ll have the 10-15 minute documentary completed by the end of the quarter.

Years from now, when 2020 is in the distant past, people involved in The 89th Waa-Mu Show will still be able to relive the experience of producing a virtual musical, thanks to Bienen and Medill junior Ezri Killeen.

One of this year’s music coordinators, Killeen is working on a 10-15 minute documentary that offers a behind-the-scenes look at the creation of The Waa-Mu Show, “State of the Art,” which debuted on May 1 over Zoom.

Killeen thought of the idea to document the show in her journalism class. This spring, Killeen is taking Journalism 368-0: Documentary, a course that requires students to create a short documentary on a topic of their choosing. She needed an idea for her class assignment, and members of the Waa-Mu leadership team had also wanted to chronicle the unique experience of making a virtual show.

“I was in a really cool position to do both things,” Killeen said.

Brent Huffman, the professor of Killeen’s class, said he has enjoyed working with her on the project so far.

“There’s a lot to love about it,” he said. “I do (like) the emotion and the passion from the subjects. I think the performance itself is just beautiful and incredible, so to see the behind-the-scenes of how it all comes together is pretty great.”

The documentary will feature interviews, Zoom recordings of rehearsals and meetings and “vlog-style” moments, where members of the music team walk viewers through creating the audio or where actors rehearse songs, she said.

Though Killeen said she could have taken many different approaches for the documentary, she’s focusing on the hurdles her team faced and why they chose to follow through with the show.

“I remember the day we got the email that we weren’t coming back to school at least for the first three weeks,” she said. “The conversation… wasn’t like, ‘Oh, well the show’s done.’ But it was like, ‘Oh, what are we going to do because we all really want this show to happen.’”

In terms of story arc, the film will document the decision to continue the show, preparation for the virtual show, the show itself, the reaction to it and how the organization is planning to move forward, Killeen said.

At this point, she has gathered most of the footage and has begun stringing together one- to two-minute clips. She is aiming to have it finished for the organization by the end of spring quarter, when her assignment for class is due.

So far, one of the main characters in the documentary is the show’s director and choreographer Amanda Tanguay.

Tanguay, who has worked with Waa-Mu since 2018, said she appreciated Killeen’s project because it will remind people of the COVID-19 pandemic. Tanguay added that musicals and plays themselves often serve as a time capsule back to the moment in which they were written.

“We go to see art to see reflections of ourselves, to see things that we’re interested in, or to listen to perspectives that we’ve never even thought of before, and I think that’s what’s so cool about this documentary — it’s the same thing,” she said. “We’re discussing a project and it’s being influenced by the things that are happening around us.”

Killeen added the documentary can offer a more personal perspective of artists, whom the pandemic has hit hard. She wants to use this documentary, she said, to show that continuing to make art has helped them cling to a sense of normalcy.

“Having a little behind the scenes will show how people were able to cope with this pandemic by doing what they love,” Killeen said. “And hopefully (it will) give everyone a little hope that art isn’t dead.”